Richard Pilger, Head of DOJ election crimes unit, has announced that he will be resigning in protest, after Attorney General William Barr authorized federal prosecutors across the United States to investigate claims of voter fraud at numerous polling places in different key battleground states.

Pilger’s resignation came just hours after Barr sent out a memo announcing his plan to move forward with election investigations. 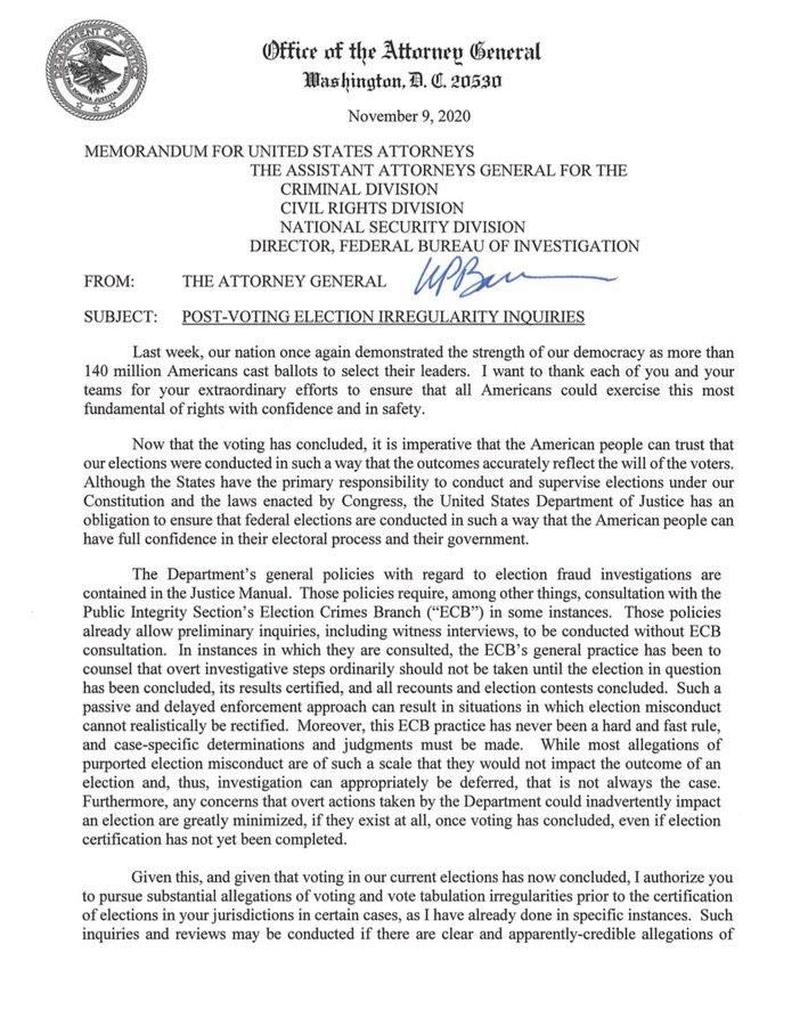 “Now that the voting has concluded, it is imperative that the American people can trust that our elections were conducted in such a way that the outcomes accurately reflect the will of the voters,” Barr wrote.

The announcement was widely praised by Republican supporters of Donald Trump, and widely criticized by Democrats. Many senior US officials were also upset about the decision, because there are rules against the DOJ intervening in election issues like this. Barr dismissed these criticisms saying that “Such a passive and delayed enforcement approach can result in situations in which election misconduct cannot realistically be rectified.”

The decision was enough to cause Richard Pilger to resign from his job as director of the Election Crimes Branch of the Department of Justice, a title that he held since 2010.

"Mr. Barr’s authorization prompted the Justice Department official who oversees investigations of voter fraud, Richard Pilger, to step down from the post within hours, according to an email Mr. Pilger sent to colleagues that was obtained by The NY Times."https://t.co/KlwjqMVazV

In his resignation letter, Pilger said, that Barr’s memo represented “an important new policy abrogating the forty-year-old Non-Interference-Policy for ballot fraud investigations in the period prior to elections becoming certified and uncontested.”

“Having familiarized myself with the new policy and its ramifications, and in accord with the best tradition of the John C. Keeney Award for Exceptional Integrity and Professionalism (my most cherished Departmental recognition), I must regretfully resign from my role as Director of the Electoral Crimes Branch. I have enjoyed very much working with you for over a decade to aggressively and diligently enforce federal criminal election law, policy and practice without partisan fear or favor. I thank you for your support in that effort,” Pilger wrote.

The letter was formal and professional, with no direct criticisms towards the current administration.

Legal experts suggested that it should be up to the state governments, not the federal governent, to investigate claims of election fraud.

National security lawyer Bradley P. Moss told Law&Crime: “This is getting rather dangerously close to the line of unlawful political interference by the Justice Department.“

“The federal government has very little role in the conduct of our elections, and there is no indication that the various quixotic lawsuits being filed in the states can’t resolve this issue just fine without intervention by DOJ,” Moss said.

William Barr became attorney general for the second time in 2019. During his time in the position, he has received criticism from some for his handling of several cases, including his involvement the Mueller report, and interventions in the guilty convictions and sentences of former advisors to President Trump, Roger Stone, and Michael Flynn.