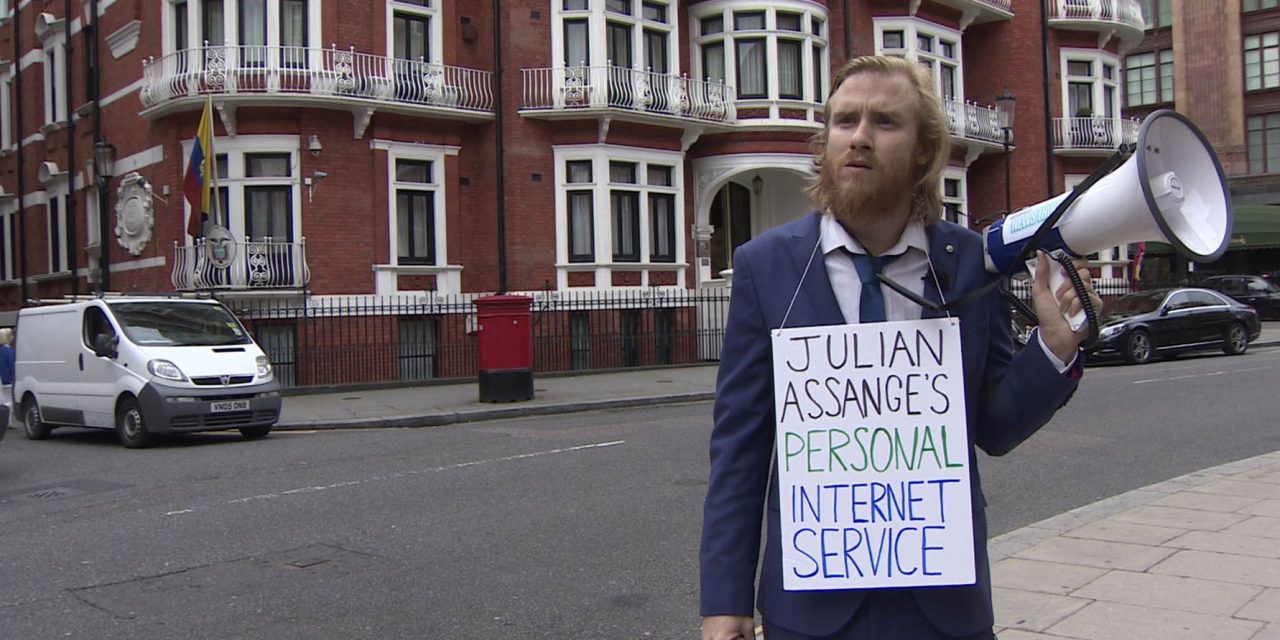 A hero with a bullhorn has taken to reading Julian Assange the internet from the sidewalk outside of the Ecuadorian Embassy, as the nation cut off the Wikileaks founder’s access to the world wide web.

#Ecuador confirms it Cut Internet on #Assange to avoid interference in US elections. Statement via @robertcaruso pic.twitter.com/0NmVuWfVE3

Wearing a tie and a sign around his neck that reads, “Julian Assange’s Personal Internet Service,” comedian Bobby Mair stood outside the embassy on Wednesday shouting the day’s “internet highlights” to the controversial publisher.

“In your hometown right now of Townsville, it’s like 32 degrees [Celsius, 90 Fahrenheit]. Maybe some of your childhood friends are having a nice day.” Mair read through the bullhorn towards Assange’s window. “Maybe you could write them a letter.”

The comedian also read Assange the list of what is trending on Facebook, including the fact that Phil Collins is going on tour. He proceeded to sing Collin’s hit song, “In the Air Tonight.”

This is what happened when @BobbyMair went to read the internet to @wikileaks Julian Assange. pic.twitter.com/SVtR7vxhaJ

Eventually, a police officer approached Mair and asked him to turn the megaphone down a bit, which he complied with.

“I thought about it, and realized they probably just changed the password on the wifi in the embassy,” Mair shouted. “So I thought of some passwords they might have changed it to at the Ecuadorian Embassy — try ‘Quito,’ that’s Ecuador’s capital! ‘South America’ — people aren’t creative with their passwords, try ‘South America.’ Try ‘yummy coffee’ maybe…”

Mair then appeared close to a breakdown as he screamed for Assange to pay attention to him and come out on the balcony to say that he got the information.

It remains unclear if Assange appreciated, or even heard, his personal “internet service,” but the internet sure did. I suppose those of us who saw it are the last ones who needed it, though.