Republicans on the House Oversight Committee have released several emails which suggest Dr. Anthony Fauci may have known that Covid-19 originated from a lab leak, and that it may have been “intentionally genetically manipulated.”

“We write to request a transcribed interview of Dr. Anthony Fauci, Director, U.S. National Institute of Allergy and Infectious Diseases (NIAID). Excerpts of emails we are making public today (see enclosed Appendix I) reveal that Dr. Fauci was warned of two things: (1) the potential that COVID-19 leaked from the Wuhan Institute Virology (WIV) and (2) the possibility that the virus was intentionally genetically manipulated. It is imperative we investigate if this information was conveyed to the rest of the government and whether this information would have changed the U.S. response to the pandemic,” reads the letter from Reps. James Comer and Jim Jordan to HHS Secretary Xavier Becerra.

The letter goes on to state that Fauci – despite claiming otherwise on multiple occasions – was in fact aware of the monetary relationship between NIAID, the NIH, EcoHealth Alliance and the Wuhan lab – by January 27, 2020. Fauci also knew that EcoHealth and NIAID worked together to craft a grant policy which would ‘sidestep the gain-of-function moratorium at the time.’

“This allowed EcoHealth to complete dangerous experiments on novel bat coronaviruses – and with little oversight – that would have otherwise been blocked by the moratorium,” the letter continues, adding that in January 2020, Fauci was also aware that EcoHealth was delinquent in submitting an annual progress report to NIAID, “presumably to hide a gain-of-function experiment conducted on infectious and potentially lethal bat coronaviruses.”

The letter references a February 1, 2020 conference call between Fauci, NIH head Collins, and ‘at least eleven other scientists’ who convened to discuss Covid-19.

“It was on this conference call that Drs. Fauci and Collins were first warned that COVID-19 may have leaked from the WIV and, further, may have been intentionally genetically manipulated. Again, it is unclear if either Dr. Fauci or Dr. Collins ever passed these warnings along to other government officials or if they simply ignored them.” 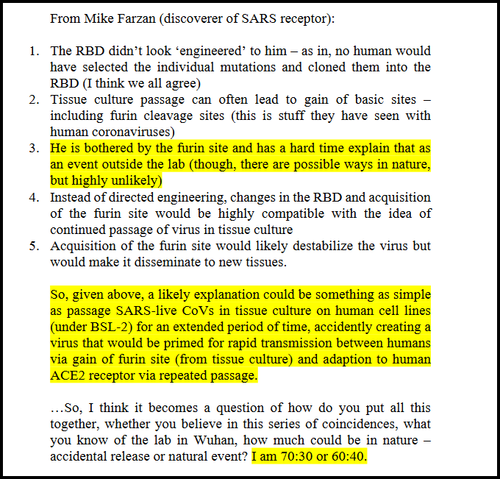 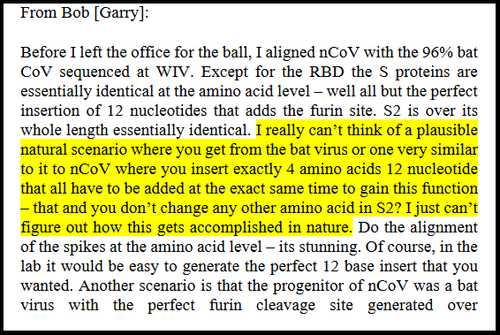 Three days after the call, four participants authored a paper entitled “The Proximal Origin of SARS-CoV-2,” of which Fauci and Collins were sent drafts. The authors, who had previously expressed concern over a lab-leak and genetic manipulation, suddenly abandoned that theory to insist the new virus had a natural origin.

Meanwhile, on April 16, 2020, Collins emailed Fauci to express dismay that the Nature Medicine article which they saw prior to publication (and were given the opportunity to edit), did not quash the lab leak hypothesis. Collins asked Fauci if the NIH could do more to “put down” the lab leak hypothesis. The next day, Fauci cited the paper from the White House podium “likely in an effort to further stifle the hypothesis that COVID-19 leaked from the WIV.”

The House GOP letter then asks a series of questions.

Rather than be transparent with the Committee, HHS and NIH continue to hide, obfuscate, and shield the truth. By continuing to refuse to cooperate with our request, your agencies are choosing to hide information that will help inform the origins of the ongoing pandemic, prevent future pandemics, respond to future pandemics, inform the United States’ current national security posture, and restore confidence in our public health experts. HHS and NIH’s continued obstruction is likely to cause irreparable harm to the credibility of these agencies. The emails released today raise significant questions, including but not limited to:

1. Did Drs. Fauci or Collins warn anyone at the White House about the potential COVID-19
originated in a lab and could be intentionally genetically manipulated?

2. If these concerns were not shared, why was the decision to keep them quiet made?

4. Did Drs. Fauci or Collins edit the Nature Medicine paper entitled “The Proximal Origin of SARS-CoV-2”?

5. Would having this knowledge earlier have benefitted either vaccine or treatment development?

6. By February 1, 2020, were Drs. Fauci or Collins aware of the State Department’s warnings about WIV safety?

7. Would this warning have changed the early response to the COVID-19 pandemic?