In Less Than Two Weeks, Millions of Americans Will Lose Unemployment Benefits

With at least 24 GOP-led states set to end federal unemployment assistance before they’re set to expire on Sept. 6, millions of Americans are going to need to dust off those resumes and start helping reduce the massive job shortage after being paid to stay home for over a year.

The benefits set to lapse include not only the additional $300 weekly federal supplement, but programs for gig workers and others who typically don’t qualify for aid “(Pandemic Unemployment Assistance, or PUA) and for the long-term unemployed (Pandemic Emergency Unemployment Compensation, or PEUC) in most cases,” according to CNBC, which has provided this handy guide to states set to end benefits, and when:

Several states are even offering financial incentives for people who find new jobs, including Arizona, Montana, New Hampshire and Oklahoma. 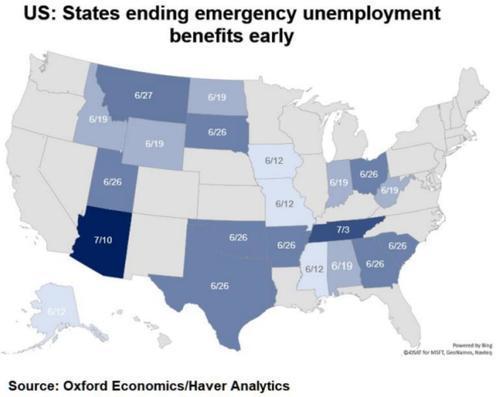 The programs are all set to last through Sept. 6 as part of the American Rescue Plan, however Republican governors say that enhanced benefits say they’re discouraging people from returning to work (while the left desperately claims the giant gulf between job openings and continuing claims is a skills or geographic mismatch). 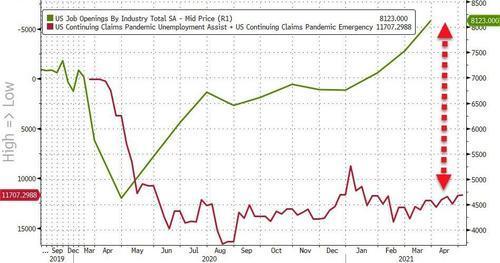 “Employers are telling me one of the big reasons they cannot recruit and retain some workers is because those employees are receiving more on unemployment than they would while working,” said Idaho Gov. Brad Little (R) in a statement. “My decision is based on a fundamental conservative principle — we do not want people on unemployment. We want people working.” 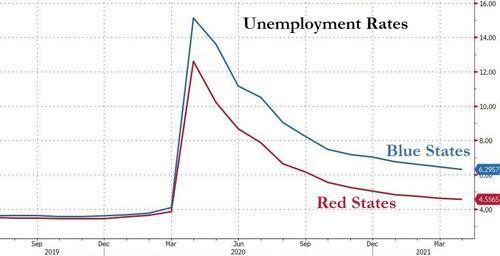 As the Babylon Bee notes satirically, “Shocking Study Finds Paying People Not To Work Makes People Not Want To Work.”

According to JPMorgan, cutting benefits is “tied to politics, not economics,” adding that while benefits are likely causing some people to stay at home, it’s not a major factor in the unemployment rate.

A group of Democratic lawmakers, on the other hand, want pandemic stimulus to become Universal Basic Income.

Congressman Jimmy Gomez (CA-34) and Congresswoman Gwen Moore (WI-04) led five of their Ways and Means Committee colleagues in asking President Biden to include recurring direct payments and automatic unemployment insurance in his American Families Plan, according to a statement.

In response to the President’s support for automatically adjusting the length and amount of UI benefits unemployed workers received depending on economic conditions, the lawmakers are calling on the White House to back a plan that would issue recurring direct payments and unemployment insurance should a similar crisis hit our nation in the future. Recurring direct payments have broad, bipartisan support from both the general public and economic experts, and stimulus checks issued through the CARES Act, the year-end spending bill, and the American Rescue Plan Act, along with enhanced federal UI benefits, proved to be the most effective, but temporary, forms of direct relief during the COVID-19 pandemic.

“The success of the American Rescue Plan, combined with direct financial assistance in the CARES Act and prior federal legislation, is evident in communities nationwide,” said Gomez. “But we can’t pretend that a $1,400 check will be enough to last a year, and we need to be prepared with a strengthened safety net should a similar economic crisis strike again.”

Who’s going to pay for that again?