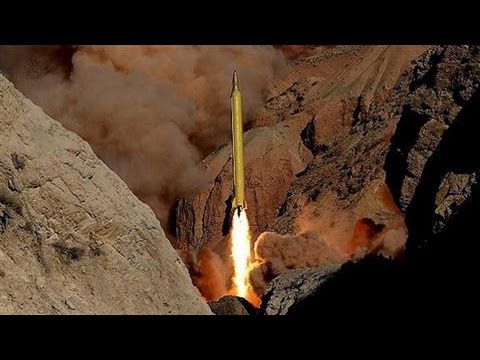 One day after North Korea launched 4 ballistic missiles, 3 of which fell into the East Sea inside Japan’s economic exclusion zone, and which have painted a spotlight on how Trump will react to this latest provocation, Fox reports that Iran also test-fired a pair of ballistic missiles this weekend into the Gulf of Oman, with one missile destroying a floating barge approximately 155 miles away.

The launches of the Fateh-110 short-range ballistic missiles were the first tests of the missile in two years, one official said. It was not immediately clear if this was the first successful test at sea — raising concerns for the U.S. Navy, which operates warships in the area.

According to one quoted official, Iran launched the two short-range ballistic missiles from Islamic Revolutionary Guard Corps bases in Bandar-e-Jask, in southeastern Iran. The first missile was fired on Saturday, but missed its target, though it landed “in the vicinity,” one official said. A day later, Iran made another attempt and was successful. The Iranian Fateh-110 Mod 3 has a new “active seeker,” helping the missile locate ships at sea, according to one official.

“It’s a concern based on the range and that one of the missiles worked,” said one official, who requested anonymity because he was not authorized to disclose the launch. Two years ago, Iranian cruise missiles destroyed a large barge designed to look like an American aircraft carrier. Iranian state-television broadcast the images publicly at the time.

According to the Foundation for Defense of Democracies, Iran has conducted as many as 14 ballistic missile launches since the landmark nuclear agreement in July 2015. A senior U.S. military official told Fox News that Iran had made great advances in its ballistic missile program over the past decade.

This launch appears to be in addition to what we reported on Saturday, in which Iran successfully test-fired a sophisticated, Russian-supplied S-300 air defense system, according to the official IRNA news agency reported on Saturday. The drill took place during a recent military exercise named Damvand, and was attended by senior military commanders and officials according to Tasnim.

In a separate report, Reuters notes that Iranian vessels came within 600 yards of U.S. Navy ship in Strait of Hormuz, forced it to change direction, Reuters says in tweet, citing unidentified official.

BREAKING: Iranian vessels came within 600 yards of U.S. Navy ship in Strait of Hormuz on Saturday, forcing it to change direction – official

It is unclear as of this moment if the two incident were related, and whether the White House plans on responding to either the North Korean ballistic missile launch or the latest moves by Tehran as the Trump administration has vowed to do.