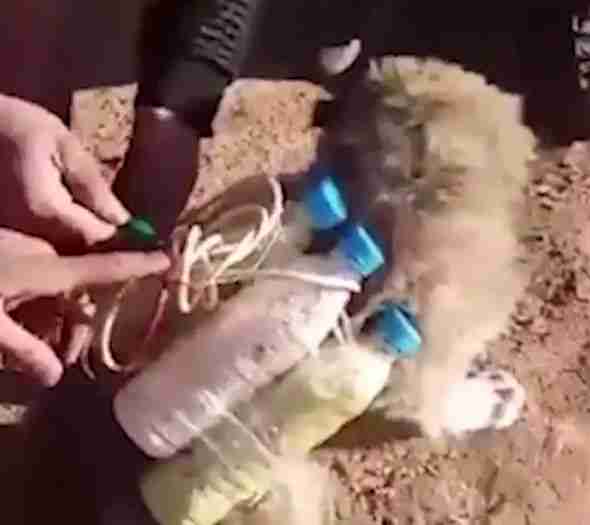 The Islamic State has repeatedly proven that they are the most ruthless terrorist group in the world, but this horrifying video takes things to a whole new level.

The authenticity of the video is unclear, but if authentic, the video appears to show that Islamic State fighters fitted the puppy with a bomb belt for a ‘martyrdom’ attack.

A Twitter user alleged that the bomb was being to sent to the Iraqi Popular Mobilisation Units (PMU), which is a state-sponsored group assembled to battle with the jihadis in Iraq.

In 2014, the group was incorporated into the country’s armed forces to help fight on the battlefield as major cities were overtaken by terrorists, the Express reported.

In the video, three men affiliated with the PMU are seen crouching over the small dog talking to the camera as they disarm the devices.

They then go on to tell the camera the dog is strapped together with four bottles and they have removed the explosives.

“We have disarmed the explosives and taken them off,” the group said.

They then add if detonated, the dog bomb could have killed three of four people.

The PMU members claimed the dog was sent around the corner to where they were positioned to be used in a remote detonation attack.

The group called ISIS ‘sick’ and asked what was this animal’s crime, adding that ISIS has no morals and that they will never defeat us.

“ISIS has just sent an innocent animal with explosives wrapped around it to our position to try and blow our troops up,” the group said.

“The animal is being sent to the Baghdad Zoo for a nice break from the war zone and well away from ISIS fighters trying to blow animals up for their sick war.

“What was this animal’s crime? Even animals, ISIS booby, traps them and send them out against us they have no morals, they will never defeat us those dirty ISIS fighters.”