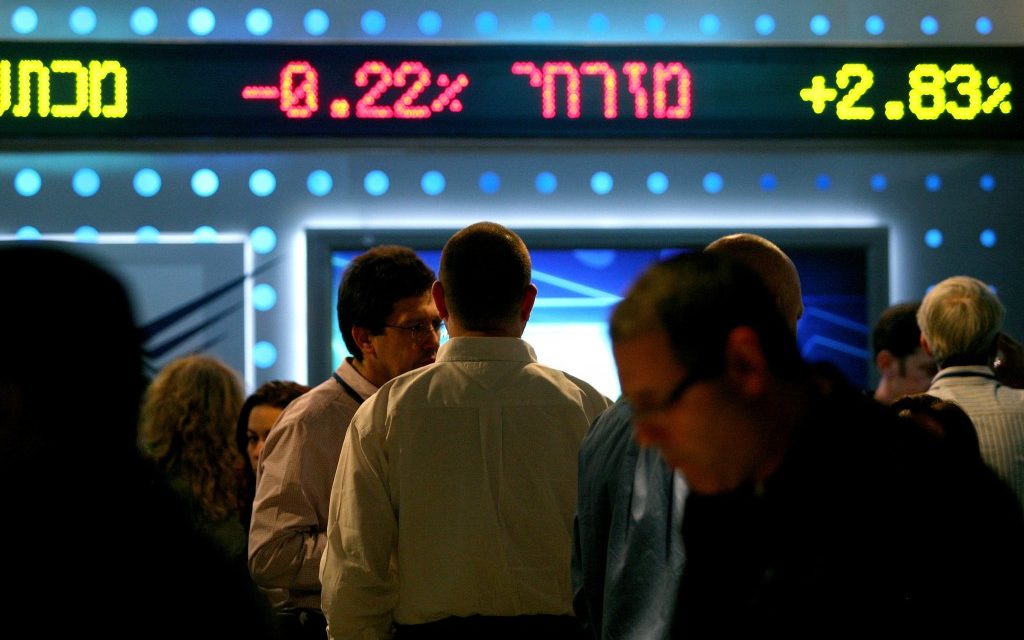 Gross domestic product expanded at an annualized rate of 0.8 percent in the January-March period compared with a revised 3.1 percent in the previous three months, the Central Bureau of Statistics said Monday. Exports, excluding diamonds and startups, sank 12.9 percent. The median estimate in a Bloomberg survey had been for 2.6 percent growth.

“Exports are going through a very difficult period and the impact on GDP was worse than expected,” Alex Zabezhinsky, chief economist at Meitav DS Investments Ltd., said by phone, citing Israeli makers of pharmaceuticals and electronic components as the hardest hit. “This is going to continue to affect growth all year.”

The Bank of Israel has been reluctant to use unconventional tools, such as the negative rates adopted by other central banks, to stimulate the economy after 20 months of annualized price drops and tepid growth. The new data should propel government policy makers to act more aggressively to stave off a recession, said Shraga Brosh, president of the Manufacturers Association of Israel.

‘Dangerous Direction’
“The Israel economy has been moving in a dangerous direction for a long time,” Brosh said in an e-mail. The government, he said, must take steps to “promote industrial growth and exports, improve productivity and create new jobs in the private sector.”
Sluggish global demand and the strength of the shekel have hurt overseas sales, which account for about a third of the $300 billion economy. Harel Insurance Investments & Financial Services Ltd., one of the country’s largest insurers, lowered its 2016 growth forecast last week to 2.7 percent from 3 percent. Zabezhinsky says growth will probably be about 2 percent.
The fourth-quarter figure was revised downward from an earlier estimate of 3.8 percent released a month ago.
Because private consumption rose 4 percent and capital investments went up 17.3 percent, the numbers “are not weak enough for the BOI to use the interest rate tool,” said Rafi Gozlan, chief economist at Israel Brokerage & Investments Ltd. “Yet we believe that due to the downward trend in exports, the low inflation and the strong shekel, the BOI will increase its volumes in the forex market.” The central bank’s benchmark rate has been 0.1 percent for more than a year.

Market Reaction
The shekel weakened 0.8 percent to 3.8149 per dollar, the lowest level since April 6 at 6:17 p.m. in Tel Aviv. The Tel Aviv benchmark index of stocks closed down 0.1 percent.
Beyond the decline in exports, economic indicators are strengthening, said Ori Greenfeld, chief economist at Psagot Investment House, pointing to growth in consumption and investment.

“It’s not as bad as it looks,” he said. “The bottom line is that even if we don’t see exports rebounding, we may see yearly growth holding strong.”

Sales of Israeli goods are plagued by several industry-specific problems, Zabezhinsky at Meitav said. Intel Corp., which has large production facilities in Israel, is suffering from the global slowdown in the personal computer sector, he said. Pharmaceutical companies, an important Israeli export industry, are in a “negative momentum” and may cut investments, he said.