“Like Nothing We’ve Ever Seen”: Imminent Eviction Wave is Coming!

The eviction moratorium expired last Friday nearly four months after the US economy effectively shutdown due to the COVID-19 pandemic, and more than 12 million renters – all behind on rent payments because of the virus-induced recession – are now at imminent risk of getting booted to the curb.

This Friday, some 25 million Americans will no longer receive their weekly $600 federal unemployment checks, and the next round of government handouts, currently discussed by Republicans and Democrats, could see benefits slashed from $600 to $200 (or be nothing at all if no deal is reached in Congress). This would crush household finances across middle-class America, resulting in an even higher number of households unable to pay their rent bill in the months ahead.

That said, Trump’s top economic advisor Larry Kudlow, who has religiously pumped stocks with meaningless headlines any time the S&P is even barely in the red, recently said an extension for the eviction moratorium program could be seen. But what if there isn’t one?

In late July, more than 31 million Americans collected unemployment benefits of some form. The economic recovery reversed in late June, as the next crisis among households looms.

“It’s like nothing we’ve ever seen,”  said John Pollock, coordinator of the National Coalition for a Civil Right to Counsel.

“There could be that many evictions in August,” he said.

On Sunday, food bank lines reemerged as people’s benefits ran out. The number of jobless Americans is staggering and downright, depressionary, suggesting no labor market recovery this year or next.

With a fiscal cliff unfolding, benefits set to run out, and a rebound in the economy reversing, Household Pulse Data from mid-July outlines an even gloomier rent crisis unfolding.

The analysis is based on Household Pulse Data from mid-July and it found that some states will be hit harder than others. For example, West Virginia is estimated to have the highest share of renter households facing eviction at close to 60%. Tennessee, Minnesota, Mississippi, Florida and Louisiana are all among the states set to be worst impacted with shares at 50% or higher. Elsewhere, Vermont is the state where renters will be at the lowest risk of eviction, though 22% of them will potentially lose their homes over the course of the crisis. – Forbes

Shown below (charted by Statista), here are the states where renters will be pressured the most. 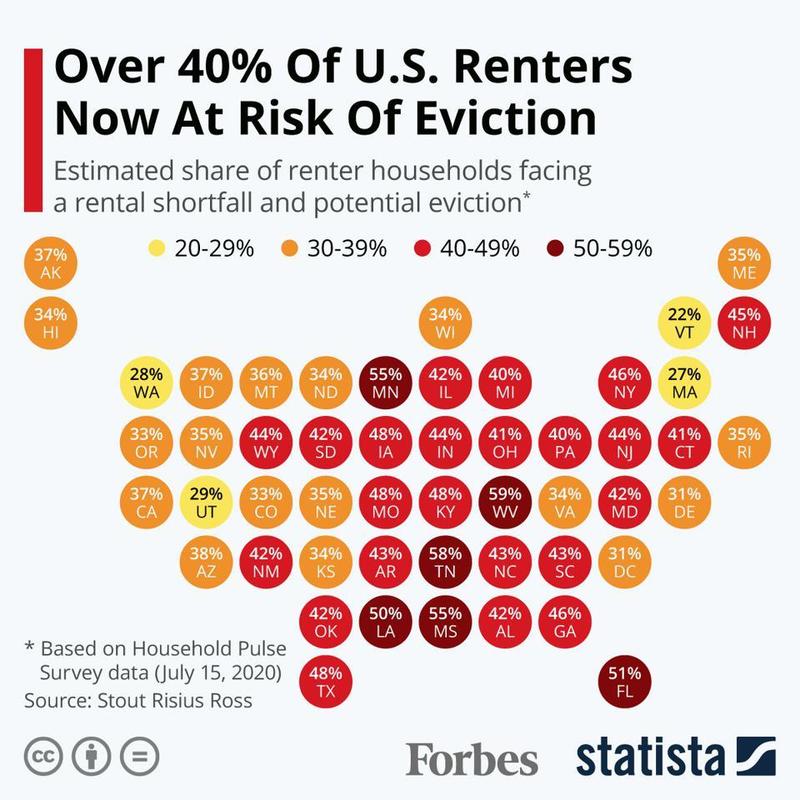 The Trump administration doesn’t have the tools to solve the crisis – fiscal and monetary policy can only delay round two of the economic crash until after the elections.

Meanwhile chaos and disagreement on Capitol Hill means that there is still no deal on a rent moratorium extension, which means that the coming weeks could see the largest ever US rent crisis, one which would make 2008 look like child’s play.