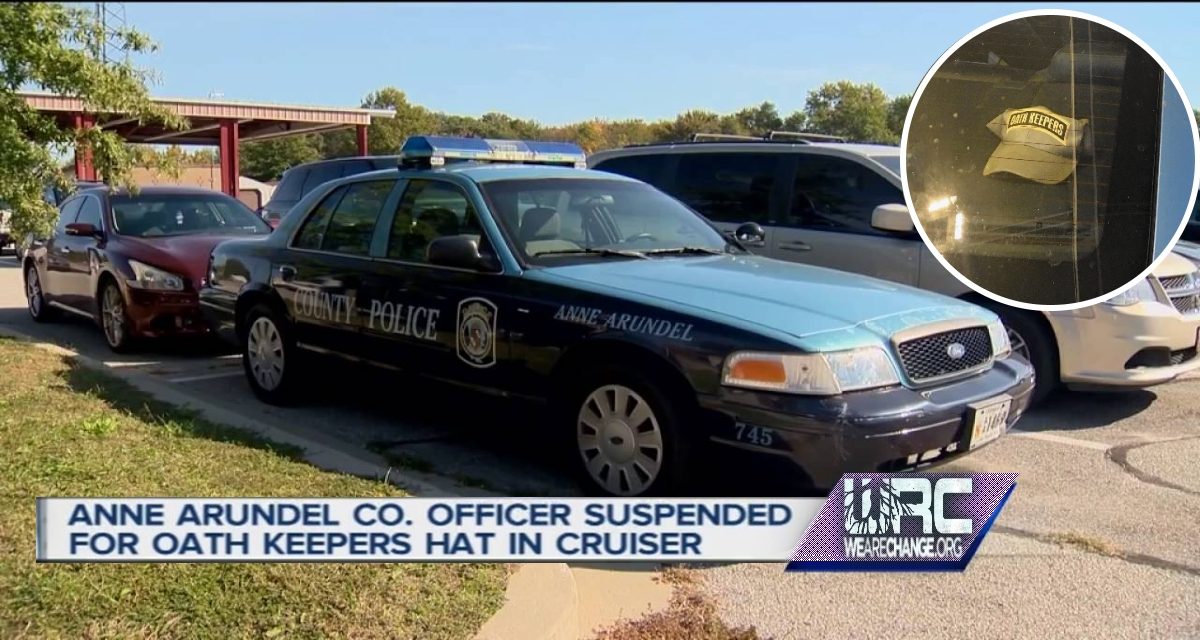 Annapolis, Maryland — An Anne Arundel police officer has been suspended for displaying a hat bearing the name of a controversial anti-government group in the rear windshield of a police cruiser, a department spokesman said Tuesday.

The hat, which displayed the name “Oath Keepers,” was brought to the department’s attention Monday afternoon, after a mother of four from Crownsville spotted it in the parking lot of the Whole Foods at the Annapolis Towne Center.

An Anne Arundel police officer has been suspended for displaying a hat bearing the name of a controversial group in the rear windshield of a police cruiser. (Photo/Courtesy)

The Oath Keepers bills itself as a non-partisan organization of current and former military who vow to uphold the U.S. Constitution “against all enemies, foreign and domestic.” The group’s controversial tactics have landed it on the radars of hate-watch groups like the Southern Poverty Law Center and the Anti-Defamation League.

Lt. Ryan Frashure, a police department spokesman, confirmed Tuesday morning that the officer’s police powers have been suspended pending the outcome of an internal investigation.

Frashure identified the officer as a nine-year veteran of the department.

In a phone interview Monday afternoon, county Police Chief Timothy Altomare said the hat appeared to violate the department’s policy against officers espousing political beliefs and vowed that such conduct would not be tolerated.

Despite the incident and the somewhat contentious national climate surrounding the U.S. presidential election, Altomare does not feel that any formal re-training is required, Frashure said.

“The prohibition against espousing political ideology while representing the police department is such a basic and well known tenant of our organizational culture,” Frashure said Tuesday by email. “Officers should know better and 99.9 percent of them do.”

Frashure would not say whether the officer had been suspended with or without pay and declined to further comment on the matter citing personnel issues.

“Public safety professionals must have a relationship of total trust with the community,” County Executive Steve Schuh said Tuesday when asked about the incident. “They can have no appearance of or actual bias of any kind — political, religious, ideological anything.”

In recent years, the Oath Keepers has injected itself into the focus of national events.

In 2014, armed members showed up at protests in Ferguson, Missouri, following the shooting of Michael Brown, an unarmed black teenager by a white police officer. That same year, the militia was involved in an armed standoff with government officials at the Nevada Ranch of Cliven Bundy.

However, the group’s president called for members to back off an armed standoff involving one of Bundy’s sons at a federal wildlife refuge in Oregon last winter. Several people were arrested and one person was shot and killed by police in that incident.
McClatchy-Tribune News Service