On Friday the Department of Homeland Security (DHS) issued an almost unbelievable new “terrorism” alert contained in a so-called ‘awareness bulletin’. While focused heavily on the threat posed by “false narratives and conspiracy theories about the 2020 election” – clearly making connections to Jan.6, the bulletin pivoted to unprecedented territory.

It’s nothing new for the Biden administration to warn and hype about “calls to violence” related to the “Capitol insurrection” – but what is new and unprecedented is its warning about potential “attacks” by “violent extremists” related to COVID-19 “conspiracy theories.” 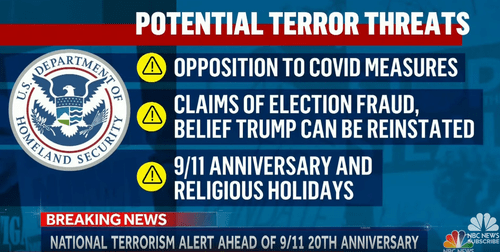 The document was the result of a DHS meeting held with top officials and high ranking intelligence officers across multiple agencies from departments in New York, Washington, and Las Vegas, NBC News reported.

The threat bulletin describes that extremists “may seek to exploit the emergence of COVID-19 variants by viewing the potential re-establishment of public health restrictions across the United States as a rationale to conduct attacks.”

This is the first time to our knowledge that “terrorism” is linked to the movement among large groups of skeptical Americans to push back against local, state and federal efforts to impose drastic mask, vaccine, and so-called ‘COVID passport’ mandates.

Interestingly the DHS document is heavily focused on such “extremism” initially manifest online in social media and chat forum groups.

Presumably, given the demographic breakdown, this means DHS is accusing young black folk of being “domestic terrorists? 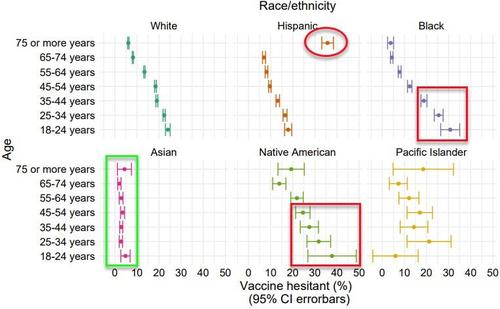 However, nothing specific is mentioned of the “several plots” which DHS seems keen on associating with resistance to “public health restrictions” – i.e.: mask and social distancing mandates.

Officials seemed to later admit in a follow-up by NBC to not actually knowing of any “specific” plot in the works: “Currently, DHS lacks specific or credible reporting indicating that violent extremists are planning to target specific events,” a DHS spokesperson said.

All of this is made further interesting and alarming for Americans’ Constitutional rights by the bulletin’s attempt to tie these trends into pro-Trump movements related to the last election:

A second DHS official told NBC News that the agency has watched conspiracy theories about the 2020 election migrate from obscure internet forums to more mainstream ones, and “we are concerned about calls to violence.”

Meanwhile, this was actually discussed at the White House within the Biden administration…

This further comes in context of far reaching censorship on the part of major US social media companies like Facebook, Twitter, and YouTube – which have long been banning “non-CDC approved” information and discussion of vaccines and other pandemic-related matters.