For those that have either mocked or merely ignored the idea that big government may be (is) using the pandemic as an “excuse” to exercise more control over every aspect of your life, we present: Exhibit A.

Zoe Buhler is a 28 year old pregnant mother who lives just outside of Melbourne, Australia. She was handcuffed in her own living room on Wednesday afternoon and charged with “incitement” after officers entered her private property (with a search warrant) and began reading Buhler her rights.

What could have prompted such a robust response from law enforcement? Buhler made a Facebook post that allegedly incited a “anti-lockdown protest” in Victoria. “Anyone from Ballarat please join us in our fight for freedom and human rights!” she wrote on the page.

Video shows Buhler trying to be reasonable and plead with officers, informing them that she has an ultrasound “in an hour”.

She asks the officers, bewildered: “Excuse me, incitement for what, what on Earth? I’m in my pajamas, my two kids are here. I have an ultrasound in an hour because I’m pregnant.” She insisted she hadn’t broken any law by putting up the post and offered one more than one occasion to simply take the post down. 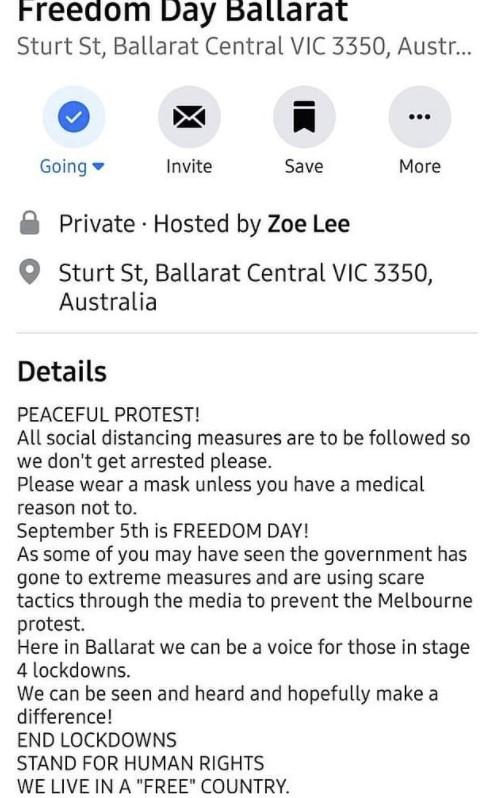 “Actually you are, that’s why we’re arresting you in relation to incitement,” the officers told her. Meanwhile, her boyfriend also tried to offer up some common sense, stating: “How about she just doesn’t do the event? It’s not like she’s done it, she made a post.”

In addition to arresting the pregnant mother over a Facebook post, police then informed her that they had a search warrant and that they needed to seize and confiscate all electronic devices in her home.

Friends of Buhler weighed in to the Daily Mail, stating: “This is absolutely disgusting!! Why don’t they do their job and catch some real criminals. This fear mongering is ridiculous.”

Meanwhile the Victoria police said that fines will be issued to anyone that considers attending the protest anyway: “We will have no hesitation in issuing $1,652 fines to anyone who is breaching the restrictions on the day, or making arrests if necessary.” The police contend that the protests “put lives at risk”.

Alan Jones of Sky News wrote on his Facebook page: “Thankfully I am not the only Australian who thinks this is appalling, disgusting and disgraceful. The only person guilty of incitement is the Premier of Victoria. His outlandish grab for power, his disdain of any accountability is forcing people to behaviour simply designed to take back their freedom.”

Buhler was ultimately charged with incitement and released on bail. She is due in court January 25. The post has been taken down.

Republished from ZeroHedge.com with permision