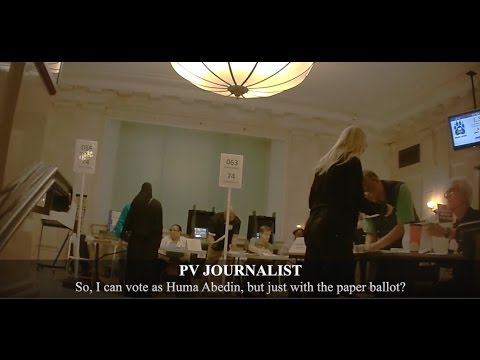 In this latest Project Veritas video an undercover journalist is offered Huma Abedin’s ballot while wearing a full burka and not even questioned.

She is then told that she can vote via a paper ballot instead of voting with a voting machine. Alan Schulkin, a Democratic Elections Commissioner in NYC then explains on video how voter fraud can be committed when people wear burkas inside polling locations on Election Day.

The video starts with the undercover PV journalist talking to Alan Schulkin, the Democratic Elections Commissioner in NYC in which the journalist says, “Not only just voter ID because of voting twice, but people can cover their faces, you know what I’m saying?”

Alan Schulkin responds, “Well the Muslims can do that too. You don’t know who they are.”

The PV journalist then proceeds to test out the information that Alan Schulkin gave to her. An election official then questions the journalist dressed in full burka.

“Do you know where you’re going?” The journalist responds, “No.”

The official then asks the PV journalist for her address in which she responds “254 Park Avenue South.”

The election official then gives the PV journalist a number in line. The video cuts back to Alan Schulkin and the PV journalist’s conversation in which the PV journalist says, “Especially, all those burkas someone could claim, oh it’s my religion, but then you don’t know if they are pretending or not.”

The journalist then proceeds to vote under  the name “Huma Abedin,” after talking to an election official who greets her with “Good morning, last name?”

What follows is shocking, “Since we don’t have your name in the book. You can fill out an affidavit ballot. Ok?” the official says.

The official then asks the PV journalist if she is “Democrat or Republican?” The journalist responds troll-fully “Huma Abedin is a registered Democrat.”

The election official then responds “I don’t have your name in the book but you can vote with a paper ballot.”

The segment then cuts back to Alan Schulkin in which he makes a racist comment about Muslims.

“They detonate bombs in public schools which we’re using that could disrupt the whole election.”

Schulkin responds again agreeing with the journalist “exactly” he says.

She then continues to explain. “But no one can do that because your going to offend them, but then it’s like, hey now, I’m not a Muslim but I can go in there you know?”

“Okay so I can vote today by paper ballot?” the PV journalist responds.

The journalist then reiterates that she is voting as Huma Abedin to the official who still hasn’t caught on.

“So I can vote today as Huma Abedin, but just with a paper ballot?’

The election official then responds “Whatever you want if that’s you. If that’s the name you voted with last election, and you haven’t changed your name?”

“Okay Ill be back. I’m going to go call my husband Anthony.” The PV journalist then walks away and is told to “come back later” by the election official.

The video ends with a final cut back to Alan Schulkin in which he makes the statement, “Your vote isn’t really counting because they can go in there with a burka on and you don’t know if they are a voter.” He adds, “your vote gets discounted because they come in there with a burka on and they can vote. People think it’s a liberal thing to do, but I take my vote very seriously and I don’t want ten other people coming in negating my vote by voting for the other candidate when they’re not even registered voters.”