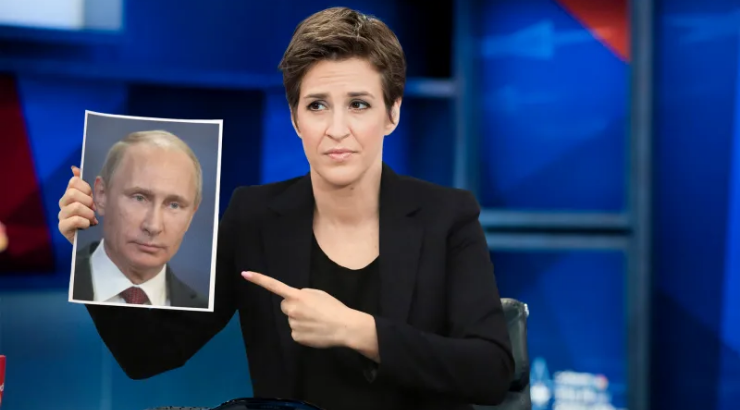 Conspiracy theorist and MSNBC host Rachel Maddow has been called out by Washington Post columnist Erik Wemple for breathlessly peddling the Steele Dossier – becoming a “clearinghouse” for the largely debunked opposition research funded by the Hillary Clinton campaign and the DNC in 2016 (and fed to the MSM six weeks before the 2016 US election by the former British spy who wrote it).

Wemple has been writing about the media’s coverage of the Steele dossier since it was significantly undercut earlier this month by Michael Horowitz, the DOJ Inspector General. Thursday’s feature details how Maddow spewed Russophobic propaganda to the American public based on Steele’s fabricated claims.

Horowitz absolutely shredded the dossier, writing in his report on FBI FISA abuse that “The FBI concluded, among other things, that although consistent with known efforts by Russia to interfere in the 2016 U.S. elections, much of the material in the Steele election reports, including allegations about Donald Trump and members of the Trump campaign relied upon in the Carter Page FISA applications, could not be corroborated; that certain allegations were inaccurate or inconsistent with information gathered by the Crossfire Hurricane team; and that the limited information that was corroborated related to time, location and title information, much of which was publicly available.”

Maddow began using the dossier to smear Trump in March of 2017 – when both CNN and the New Yorker falsely claimed that US authorities had loosely confirmed ‘some of the details’ from the dossier. An emboldened Maddow claimed that while the “baseline” dossier claim that Trump colluded with Russia to win the 2016 election had yet to be proven, “all the supporting details are checking out, even the really outrageous ones. A lot of them are starting to bear out under scrutiny. It seems like a new one each passing day.”

Based on the conclusions reached by both the FBI and DOJ Inspector General Michael Horowitz, Maddow was peddling conspiracy theories.

“When small bits of news arose in favor of the dossier, the franchise MSNBC host pumped air into them,” writes Wemple. “At least some of her many fans surely came away from her broadcasts thinking the dossier was a serious piece of investigative research, not the flimflam, quick-twitch game of telephone outlined in the Horowitz report.”

“She seemed to be rooting for the document.”

In April, Maddow ignored that the Mueller report debunked the dossier’s key allegation a literal conspiracy theory – namely that the Trump campaign coordinated with Russia to influence the 2016 US election. Instead, the MSNBC host grasped at straws – trying to suggest various claims in the dossier were corroborated.

Several days after the Mueller report emerged, Maddow addressed not the dissonance between Mueller and the dossier, but a point of possible corroboration. In perhaps its most famous allegation, the dossier claimed that Trump had rented a suite at the Ritz Carlton in Moscow and “employed” prostitutes to perform a perverted ritual for him. It suggested that there were tapes of the show, the better to amass kompromat against Trump.

A footnote in the Mueller report, noted Maddow, bore a possible connection to this part of the dossier. It turned out that Russian businessman Giorgi Rtskhiladze had sent a text message to Cohen on Oct. 30, 2016, saying, “Stopped flow of tapes from Russia but not sure if there’s anything else. Just so you know…” Those tapes were “compromising,” Rtskhiladze told the special counsel. However, he also said “he was told the tapes were fake, but he did not communicate that to Cohen.”

Seizing on the revelations, Maddow commented: “[According] to Mueller, Cohen then told Trump about that before the election. So that means Trump knew that somewhere in the former Soviet Union, a business buddy of his had taken action to make sure tapes, supposedly from Trump’s trip to Russia, those tapes weren’t getting out. Don’t worry, all taken care of. I took care of that for you, right?” she said. –Washington Post

Maddow pumped the brakes on the dossier following the Mueller report. When Horowitz published his report’s comprehensive dressdown of the dossier, there was no mea culpa from Maddow – instead, she said “The inspector general debunks that there was any anti-Trump political bias motivating these decisions. They debunked the idea that the Christopher Steele dossier of opposition research against Trump was the basis for opening the FBI’s Russia investigation. It absolutely was not, and ‘Oh, by the way, no, there was no spying on the Trump campaign.”

And while Wemple says these are legitimate points, Maddow’s track record on the dossier is abysmal.

The case for Maddow is that her dossier coverage stemmed from public documents, congressional proceedings and published reports from outlets with solid investigative histories. She included warnings about the unverified assertions and didn’t use the dossier as a source for wild claims. There is something fishy, furthermore, about that Mueller footnote regarding the “tapes.” In their recent book on the dossier, “Crime in Progress,” the Fusion GPS co-founders wrote that Steele believes the document is 70-percent accurate.

The case against Maddow is far stronger. When small bits of news arose in favor of the dossier, the franchise MSNBC host pumped air into them. At least some of her many fans surely came away from her broadcasts thinking the dossier was a serious piece of investigative research, not the flimflam, quick-twitch game of telephone outlined in the Horowitz report. She seemed to be rooting for the document. –Washington Post