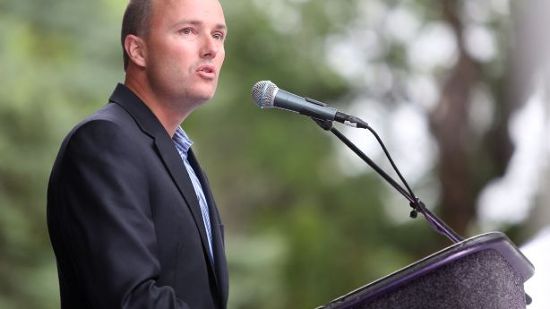 On Monday evening, Utah’s Republican Lieutenant Governor Spencer Cox gave a powerful speech at a vigil to honor those affected by the massacre at a popular gay nightclub in Orlando over the weekend.

Cox began his tearful and heartfelt statements by admitting that as a “balding, youngish, middle-aged straight, white, male, Republican, politician” he likely isn’t someone they would have expected to be speaking at the event.

Cox then explained that he grew up in a small town and attended a rural high school where he wasn’t always kind to those who seemed different than him — and for that, he apologized.

“Sometimes I wasn’t kind to them. I didn’t know it at the time, but I know now that they were gay. I will forever regret not treating them with the kindness, dignity and respect — the love — that they deserved. For that, I sincerely and humbly apologize,” Cox stated as he choked back tears.

The Republican lieutenant governor explained that his “heart has changed,” and joked that the community was patient with him even as he struggled to learn the proper letters and order in LGBTQ — “even though you keep adding new ones.”

“You have been kind to me. Jim Dabakis even told me I dressed nice once, even though I know he was lying,” he joked. “You have treated me with the kindness, dignity, and respect — the love — that I very often did NOT deserve.”

Cox explained that each of the victims of the horrific shooting had dreams, goals, talents, friends, and family — and are not just the statistics and numbers that we keep seeing flashed across our television screens.

“I believe that there is a question, two questions actually, that each of us needs to ask ourselves in our heart of hearts. And I am speaking now to the straight community. How did you feel when you heard that 49 people had been gunned down by a self-proclaimed terrorist?” Cox asked the crowd. “That’s the easy question. Here is the hard one: Did that feeling change when you found out the shooting was at a gay bar at 2 a.m. in the morning? If that feeling changed, then we are doing something wrong.”

Cox went on describe how he felt saddened by the response to the shooting, as politicians and pundits scrambled to discuss policy and push demagoguery instead of coming together — the way we have in the wake of other senseless tragedies.

“Let me be clear, there are no simple policy answers to this tragedy. Beware of anyone who tells you that they have the easy solution. It doesn’t exist. And I can assure you this — that calling people idiots, communists, fascists or bigots on Facebook is not going to change any hearts or minds. Today we need fewer Republicans and fewer Democrats. Today we need more Americans.”

Though he acknowledged that there is no easy solution, Cox explained that it doesn’t mean that we shouldn’t try. He also urged the crowd not to leave it to the politicians, and that we, as Americans and as human beings need to come together on a personal level to create change.

“And so may we leave today, with a resolve to be a little kinder. May we try to listen more and talk less. May we forgive someone that has wronged us. And perhaps, most importantly, try to love someone that is different than us. For my straight friends, might I suggest starting with someone who is gay,” Cox urged.

He ended his speech with love, and with the words from Lyndon B. Johnson following the tragic and untimely assassination of President John F. Kennedy:

“Our enemies have always made the same mistake. In my lifetime — in depression and in war — they have awaited our defeat. Each time, from the secret places of the American heart, came forth the faith they could not see or that they could not even imagine. It brought us victory. And it will again. For this is what America is all about.”