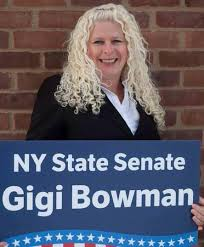 Taking lessons apparently from Republicans in Illinois , Ohio, and Oregon , several Republicans in New York have filed challenges to some of the candidates’ petitions in order to keep Libertarians off the ballot.

Subject: New Yorkers file 35,000 signatures for fourteen Libertarian candidates–Too Much for the Republicans

The Republican lobbyist who filed a general challenge to the New York Libertarian Party statewide slate has failed to perfect his challenge, meaning that Michael McDermott, Chris Edes, John Clifton and Carl Person are on the ballot for Governor, Lt. Governor, Comptroller and Attorney General. No doubt the Republican operatives were overwhelmed by the massive pile of over 29,000 signatures from New Yorkers who want another choice besides Tweedle Dee and Tweedle Dum on the ballot for Governor this year.

Separately, Grant Lally filed over 5000 sigs to get on the ballot as the Libertarian candidate for Congress in the Third Congressional District and David Casavis and John K. Wilson filed over 1000 signatures for their assembly districts in Manhattan and Queens, bringing the total number of signatures filed for Libertarians in New York to well over 35,000.

Mark Glogowski filed so many signatures for his race in the the 139th Assembly District that no challenges were filed against him as well.

Republicans have challenged four other Libertarian candidates and we will oppose them with respect to Gigi Bowman for New York State Senate District 5. Gigi submitted approximately 5000 signatures for an office which requires only 3000 valid signatures. Incredibly, the Republicans claim that every single one of Gigi’s signatures was fraudulently obtained.

As we have seen in Illinois and elsewhere, Republican thugs will stop at nothing to prevent choice on the ballot. Neither the Board of Elections, the courts nor the voters should be fooled by their duplicity.

Should politicians who are already in office have the right to limit the candidates for whom New Yorkers vote?

Yesterday, he and three of his Republican supporters sued Gigi Bowman, the Libertarian candidate for New York State Senate District 5, and the State Board of Elections to keep Bowman off the ballot.

Huntington-based Ms. Bowman collected approximately 5000 voter signatures in six weeks this summer. In their lawsuit, the Republicans claim that every one of her signatures was fraudulently obtained.

New York Libertarian Party Chair Mark Axinn commented, “The Republican Party will stop at nothing to prevent choice on the ballot. Neither the Board of Elections, the courts nor the voters should be fooled by their duplicity.”

Speaking for the 42 year-old Libertarian Party which defends constitutionally limited government, individual freedom, and an end to all prohibition, Gubernatorial candidate Michael McDermott stated, “New Yorkers should not be limited to choosing the lesser of two evils. Instead, New Yorkers should cast their votes for a balanced budget, real growth in private sector jobs, an end to the failed welfare state, and an end to needless suffering caused by inhumane drug prohibition.”

The Libertarian Party stands for both personal and economic freedom and minimal government regulation at all levels.

Mark Axinn, the Chairman of the Libertarian Party of New York also happens to practice law in that state. He sent this letter to the New York State Board of Elections:

I am the Chairman of the Libertarian Party of New York which assisted in filing a nominating petition for Georgina Bowman for Senate District 5 on August 19, 2014.

I write with respect to the objection specifications filed against said petition alleging that two of the witnesses to the petition are not registered voters.

The second objection is to those signatures witnessed by Gene Farmer. In fact, Mr. Farmer is registered to vote at xxxxxxxxxxxxxxx, Middle Island, New York 11953. Accordingly, the 132 signatures which he witnessed should not be disallowed.

Pursuant to Election Law 6-140(1)(b),”[t]here shall be appended at the bottom of each sheet a signed statement of a witness who is a duly qualified voter of the state.” Both Mr. Farmer and Ms Penzato-Viletto so qualify. Accordingly, the signatures which they witnessed should not be disallowed.

Significantly, the total number of valid signatures submitted on this petition exceeds 3000. Accordingly the objection should be rejected as Ms. Bowman has submitted more than the statutorily required number of signatures,

Thank you for your prompt consideration and review of the matters I raise herein.

Here is the complaint: