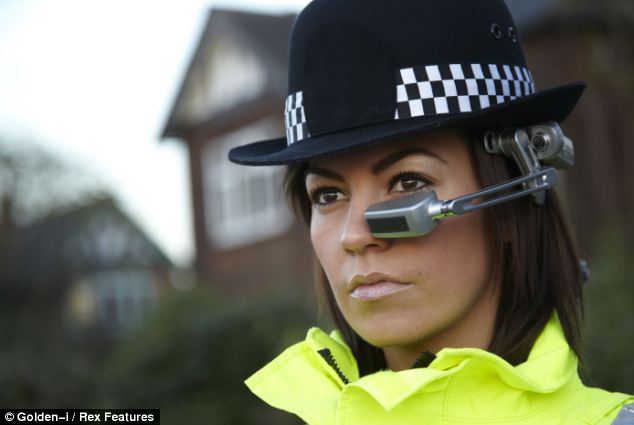 A headset computer promises to give police officers and other emergency services Robocop-like abilities.

The Golden-i device, similar to the Glass project being developed by Google, offers the ability to see through walls thanks to infrared technology.

It is operated by voice commands and head movements and allows the wearer to access vital information without using their hands.

Scroll down to see the headset in action A Female police officer wearing the Golden-i headset computer, which could give officers information and even let them see round walls using infrared sensors The Police Pro application provides infrared and video feeds to the headset, allowing them to spot suspects and see maps of buildings they are investigating The system can also identify suspects using biometrics, and scan car number plates simply by the officer looking at them

The police version of the headset can:

Golden-i has been developed by U.S. company Kopin Corporation, but software solutions tailored to police, firefighters and paramedics have been created by Nottinghamshire-based firm Ikanos Consulting.

It was shown off at the CES 2013 show in Las Vegas last month, although the firm says it is ‘too early’ to give a price.

It is set to be trialled this year, and could go on sale before Google’s Glass project, which is a far more compact headset the search giant also plans to release this year.

The Police Pro application provides real-time situational awareness in the field by allowing officers to record incidents for later analysis and view live video feeds from other Golden-i headsets.

The golden-i headsets boasts GPS, cameras and speech recognition, along with a tiny display

The unit boasts a 14MP camera which can be used to collect evidence, and bluetooth and wifi to communicate with police chiefs and other users of the system

They can also access medical records, stream live video, discuss options with associates and view maps or use GPS.

Office workers can also benefit from the technology with the Ikanos-created Lifeboard application. This system enables you to customise up to 6 different screens to meet personal working preferences and manage your day.

A 1080 HD detachable camera for recording or sending real-time video can also be added. The firm says the headset could also be useful for building workers, you can easily record video and send it to colleagues of work that needs to be done The Golden-i platform will continue to evolve as the developer community works together to build voice-controlled augmented reality applications for Golden-i.

The Golden-i hardware and software developer kit is expected be released by the summer, while a consumer version is slated for later in the year. The firm also says the headset could be useful in the office, helping people organise their day