Following up on earlier pronouncements that Russia will “liberate” the Donbas region of eastern Ukraine, Russia’s military now says it aims to seize the whole of the south as well.

The New York Times has reported the Friday statement of a Russian senior military commander, Gen. Rustam Minnekayev, as saying the aim is to take “full control of the Donbas and southern Ukraine.”

This was described as part of this newly launched “second phase” of Russia’s operation, which has lately appeared focused on completely securing the key southeast port city of Mariupol, which President Putin on Thursday had declared ‘liberated’ – though telling his defense minister that there’s no need to infiltrate the cavernous Azovstal steel plant, where the last Ukrainian fighters remain, but to seal it off instead.

The Russian commander in the Friday statements confirmed that the military plans to establish a land corridor linking up Crimea and the Donbas. But the fight for Ukraine’s south figures heavily into this, according to Gen. Minnekayev:

And in a line that will be concerning to Chi?in?u, he is also reported to have said that control of Ukraine’s south will give Russia another gateway to Moldova’s breakaway region of Transnistria.

“Control over the south of Ukraine is another way to Transnistria, where there is also evidence that the Russian-speaking population is being oppressed,” Tass quoted Minnekayev as saying at a meeting in Russia’s central Sverdlovsk region.

This puts Odesa in the crosshairs, which is home to Ukraine’s navy, and which has so far largely escaped direct heavy attack. 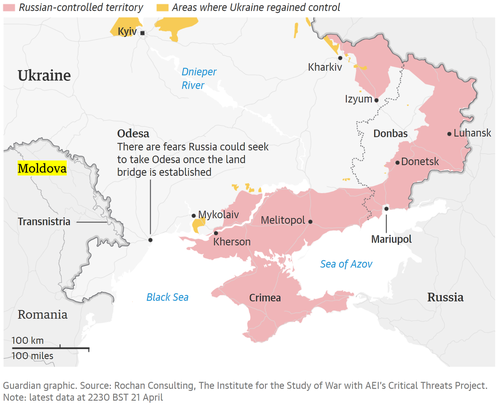 Previously both Ukrainian and Western officials had accused Moscow of eyeing Moldova next as a possibility for invasion. The small landlocked country is currently hosting somewhere between 100,000 and 400,000 refugees.

As Axios notes, “Russian troops already occupy Transnistria, an unrecognized breakaway state internationally recognized as part of Moldova,” and it remains that, “Moldova is also 100% reliant on Russian gas.”

Today #Moldova?? submitted the 1st questionnaire for #EU membership to EU Ambassador @JanisMazeiks as we take a step closer to our accession bid to the EU??. We are ready to do our part swiftly and diligently to give Moldova a chance for a better, safer & more prosperous future. pic.twitter.com/04SMFKKa40

This week it’s become clear that tiny Moldova is seeking to be fast-tracked into European Union membership. The EU in turn stated, “We are ready to do our part swiftly and diligently to give Moldova a chance for a better, safer & more prosperous future.”

As for Russia’s advance in Donbas, the Pentagon suggested this week that there’s been little to no significant territorial gains, however late on Thursday Reuters had cited that Russian forces seized control of 42 villages in eastern Ukraine.