Saudi Arabia, the world’s largest crude oil exporter, doesn’t have enough production capacity to boost oil production in a world still hungry for fossil fuels, implying that President Biden’s recent trip to the Kingdom was a waste of time.

Crown Prince Mohammed bin Salman (MbS) told the leaders of the US, the Gulf Cooperation Council (GCC) states, Jordan, Egypt, and Iraq at a meeting this weekend that additional capacity to increase production to 13 million barrels per day (bpd) by 2027 will be challenging. 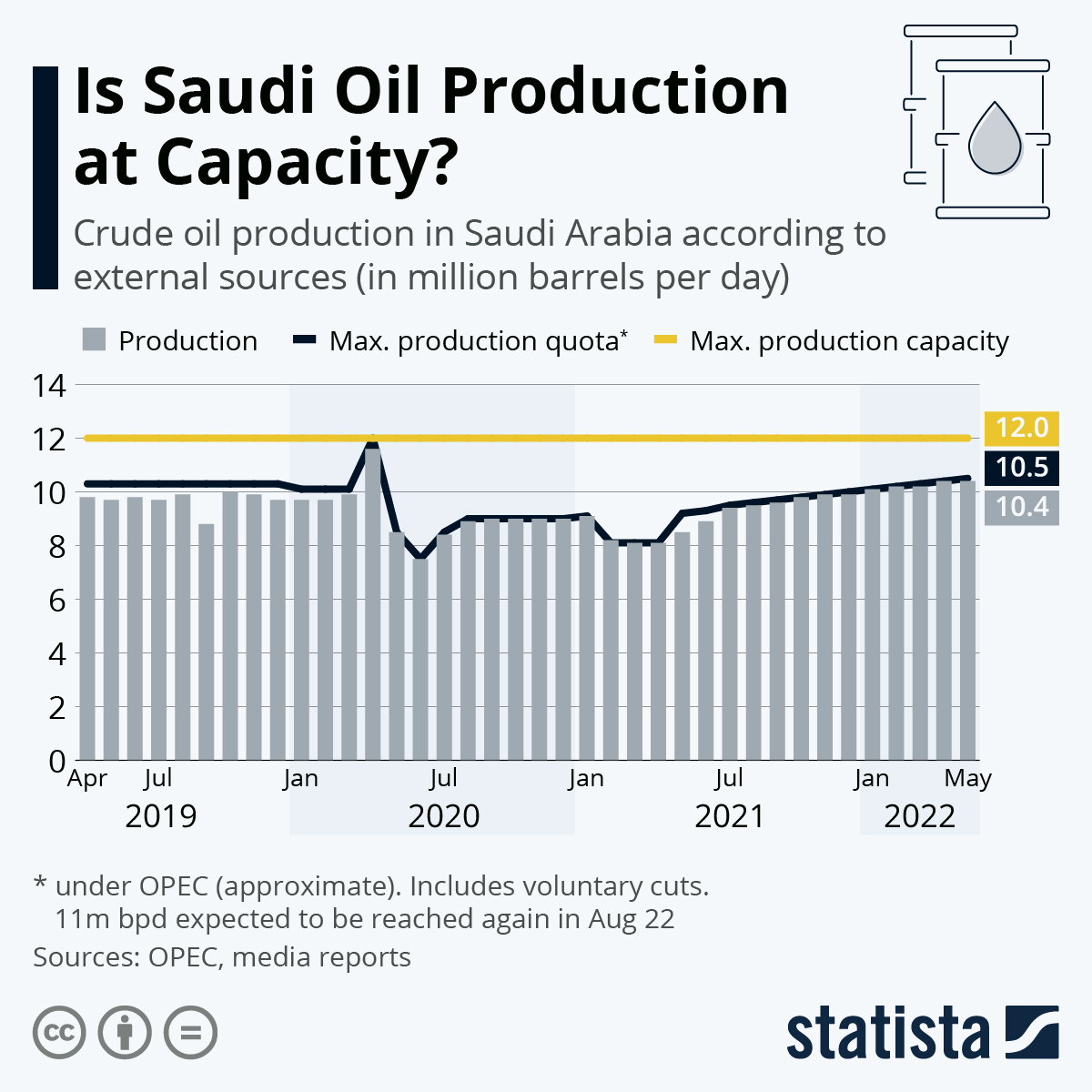 Summer spoke with people familiar with Saudi oil flows and said the Kingdom would struggle to produce another half million bpd at 11 million bpd. And it would be tough even to get production at 12 million bpd. They gave a handful of reasons why bringing on spare capacity would be a troubling task, such as maintenance requirements, declining production at some oil-producing fields, and technical issues involving pressure levels. It was also noted that when state oil company Aramco reduced drilling during the early days of the virus pandemic because of plunging global demand, boosting output rapidly by injecting wells with fluids to increase production could cause longer-term damage.

The revelation that the Kingdom nears the long-term upper limit should not come as a surprise to many, as French President Emmanuel Macron stated at the recent G7 meeting that spare production capacity was very limited for the Saudis and UAE.

Saudi Arabia, the holder of the world’s largest oil reserves, is telling the world that in the not-so-distant future it “will not have any additional capacity to increase production.”Let that sink in.

Blas pointed out the output contain could be the lack of investment to boost output, or what’s worse: “If money isn’t the constraint, then it must be geology.”

For years, Saudi Arabia has brought new oil fields online to offset the natural decline of its aging reservoirs and allowed Ghawar, the world’s biggest oil field, to run at lower rates. As it seeks to boost production capacity and not just offset natural declines, Aramco is increasingly turning to more expensive offshore reservoirs. Perhaps Riyadh is less confident in its ability to add new oilfields. Ghawar itself is pumping far less than the market assumed. For years, the conventional wisdom was that the field was able to produce about 5 million barrels, but in 2019 Aramco disclosed that Ghawar’s maximum capacity was 3.8 million.

If the obstacle to boosting production is geology, rather than pessimism about future oil demand, the world faces a rocky period if consumption turns to be stronger than currently expected. For now, Saudi peak production is a relatively distant matter, at least five years away. More urgent is whether Riyadh would be able to sustain its current output of 11 million — something it has achieved only twice in its history, and then only briefly — let alone increase it further. But that ceiling will matter towards the end of the decade, and perhaps even earlier.

The conservation among energy analysts is all about spare capacity at the moment.

The 12 million bpd would be reached in 30 days and maintained to up to a year. But does Saudi Arabia see a NEED to max out capacity to 12? no they don't.

What comes next is an OPEC+ meeting scheduled for Aug. 3. The group has called for incremental, monthly increases in output. However, some members have expressed that they cannot meet their share of production.

The world is structurally short production capacity at a time demand growth remains robust. Also, Russian energy supplies are declining due to the impact of the Ukraine invasion. JPM’s commodities team recently warned crude Brent prices could rocket higher if Russian production is slashed, with forecasts as high as $380 in a worst-case scenario.

Brent prices remain over $105 on Wednesday morning as the market has no clear sight of where additional supply will come from to balance demand — maybe only a recession/depression is needed to crush consumer demand.

To sum up, Biden should’ve stayed home last weekend and enjoyed riding his bike and eating ice cream in Rehoboth Beach than trying to optically please Americans that he’s solving the energy crisis that appears to be a multi-year crisis.