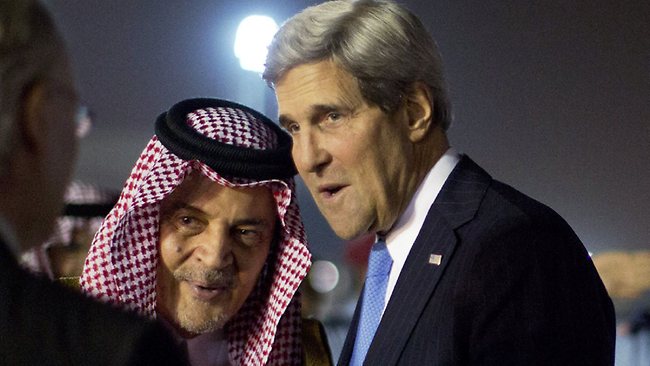 The Saudi foreign Minster called his American counterpart, demanding him to end “the devastating campaign” against the Muslim population in eastern Syrian territories ,occupied by the so-called Islamic State in Iraq and Syria, reported RT.

During his phone –call, Saud bin Faisal Al Saud, importuned Mr. John Kerry to persuade U.S. president to end all hostilities with the hardline Islamist organization to save tens of thousands of innocent Syrian entrapped civilians and to continue preventing Iran from achieving its goals   , RT quoted the Saudi Daily Al-Okaz as saying.

The American senior official in his part , told the Saudi foreign minister to convey president Obama’s message to Saudi monarch , asking him to prevent factions inside the Saudi regime from financing the notorious ISIS terrorists group in Syria and join western alliance against the Al- Qaeda inspired organization.

Today, at around 9:00 GMT, American jet fighters pounded several ISIS targets inside the Syria territory, especially in the remote eastern Al-Riqqa province. The Syrian foreign minister in a press conference declared that he was aware in advance of an imminent American strike.

U.S. intensive aerial bombardment followed the decapitation of an American photojournalist and a British contractor by ISIS militants.

Since the start of Syrian crisis in 2011, Saudi Arabia sough to exploit the unrests to overthrow the Syrian government of President Assad, a Britain–educated ophthalmologist, by unleashing many infamous prisoners indicted for terrorist activities but it seems that the same monster ,created by Saudis and CIA now is posing serious threat to their vital interests.

Saudi Arabia has denied giving any support to ISIS, the jihadi group that has captured swaths of territory across northern and central Iraq, as well as controlling large parts of northern Syria.

Earlier Mr. Kerry accused The Saudi monarchy to funnel money and weapons to rebel groups fighting against President Assad from early on in the Syrian uprising. Wealthy individuals and religious foundations in Saudi Arabia, Kuwait, Qatar and elsewhere in the Persian Gulf have channeled millions of dollars to the anti-Assad opposition.

American secretary of state demanded the Saudi official to restrict state connivance regarding sending of financial contributions to ISIS and other terrorist organizations from that ilk.