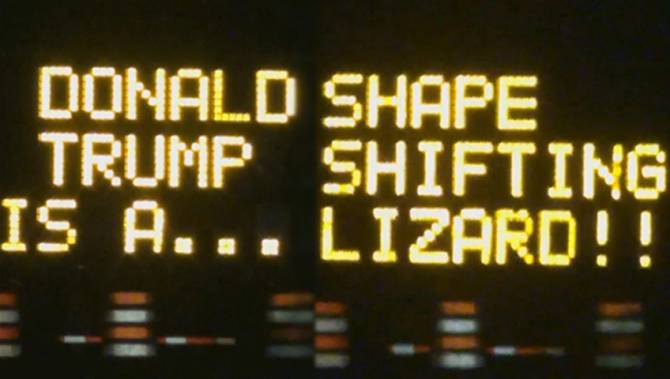 Electronic construction signs belonging to the Texas Department of Transportation were hacked on Monday, and changed to display messages such as “Bernie for President,” and “Donald Trump is a… shape shifting lizard!!”

Other signs also had their messages changed to phrases such as “work is cancelled, go back home,” and “party hardy yall!”

#BREAKING No need to go to work today! @JennyAFox4 has the latest on a sign hacking outbreak @GoodDayFox4 @FOX4 pic.twitter.com/F5Gq0MEsz6

I don't think @TxDOT really meant to send this msg to drivers off i30 today in Dallas. ?. Spotted today pic.twitter.com/IKZ6EHeoyQ

The signs along Interstate-30 in Dallas were all hacked over the course of 48 hours on Monday and early Tuesday. The signs, which are meant to warn drivers about road construction, were all eventually turned off.

“Due to safety concerns, we strongly discourage people from stopping in work zones to create situations such as this,” Texas Department of Transportation spokesman Tony Hartzel said in a statement on Monday.

So far, no suspects have been named in the hacking, nor has it been confirmed if it was done on site or remotely.

UPDATE: TxDOT crews just came and turned off the hacked sign here at Westmoreland & I-30 pic.twitter.com/fB4B6ik6UJ

A spokesperson for TxDOT told local station KRLD that there is no humor in the hack, and that the messages removed warnings about nearby construction zones.

The idea of reptilian humanoids is often used in science fiction and has been pushed by conspiracy theorists such as David Icke who believe that shape-shifting aliens control earth through political power.

In 2011, comedian Louis C.K. appeared on the Opie and Anthony radio show and repeatedly questioned former Secretary of Defense Donald Rumsfeld about whether or not he and former Vice President Dick Cheney are actually lizards people who enjoy eating human flesh.

Rumsfeld did not outright deny being a lizard, causing C.K. to run with it as an admission of guilt.