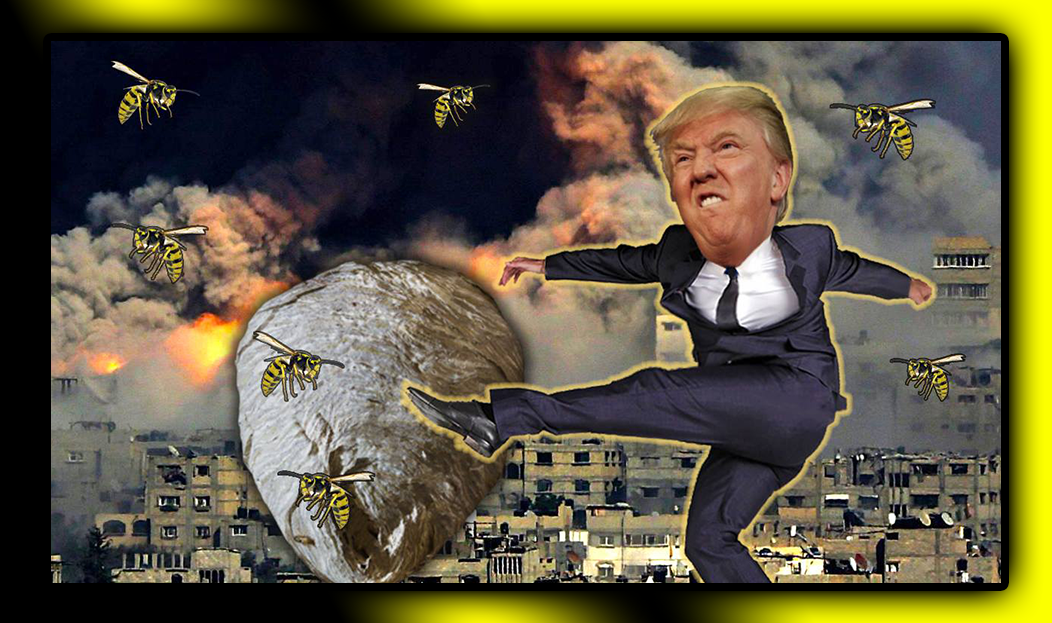 Welcome back, beautiful and amazing people. My recent philosophical videos have been unpopular, so I’ve decided to bring you the latest news about how not only are your leaders leading us to total global catastrophe and war but they are also sexual predators and pedophiles.

Starting off with the powerful sexual abuser story, as we are now finding out an eighth person has come forth and accused U.S. Al Franken of sexual misconduct and harassment.

This seems to have been the straw that broke the camels back as Senator Franken has officially confirmed his intent to resign from the Senate. Even though he denies that some of the accusations are true, others he ‘remembers differently’, he still says that he will be stepping down in a couple of weeks.

This seems to have opened the floodgates of the D.C degeneracy as just yesterday; Congressman John Conyers has ‘retired’ after numerous allegations and documentation of sexual abuse cover-up that has been taking place within Washington D.C.

In related news, Time Magazine decided to name this years Person of The Year 2017, to the brave breakers of the silence of the ongoing culture of sexual assault and rape. Giving credit to all of the people who have decided to come out and blow the whistle on the immoral and disgusting abuse taking place in the top tiers of Hollywood. 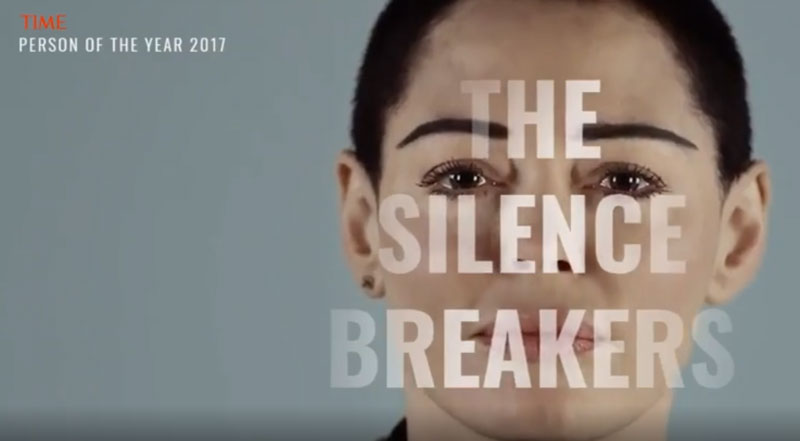 Just months ago these people were able to get away with their crimes because of their seat of power. We are now learning that Lena Dunham says she personally warned Hillary Clinton and the Clinton Foundation about Harvey Weinstein, twice about his compulsion for sexual assault. Conventionality the allegations were ignored because Harry was one of their top donors. The massive cover-ups and misuse of government resources to intimidate victims is nothing short of tragic as more information comes to light about these crimes.

We are seeing very gross negligence with the handling of evidence and proprietorial misconduct that was allowing these sick individuals to get away with their crimes. Corey Feldman’s 1993 audio files naming alleged sexual predators were just found by police. Police say that they have the tapes but will not release them to the public. Corey says that he has another recording of these conversations and will soon release the full audio. We will be following this story very closely so please stay tuned for more information.

Moving forward to the most prominent story this week, President Donald Trump just officially recognized Jerusalem as the capital of Israel. At the same time also announced the plans to relocate the U.S. embassy there. This, of course, inflames the entire region bringing a global conflict that much closer to fruition. This is probably the end of U.S. foreign policy in the middle east and also confirms that peace is not an option for the Palestinians.

This brought worldwide alarm and rejection to Trump’s Jerusalem proclamation as almost every country seeing the implication to these remarks. Even one of the closest allies to the United States came out and said that this action was irresponsible and have even come out to condemn Donald Trump and warning of serious consequences. There is a laundry list of other nations, agencies, and organizations that have come out to warn Trump against his current course of action. 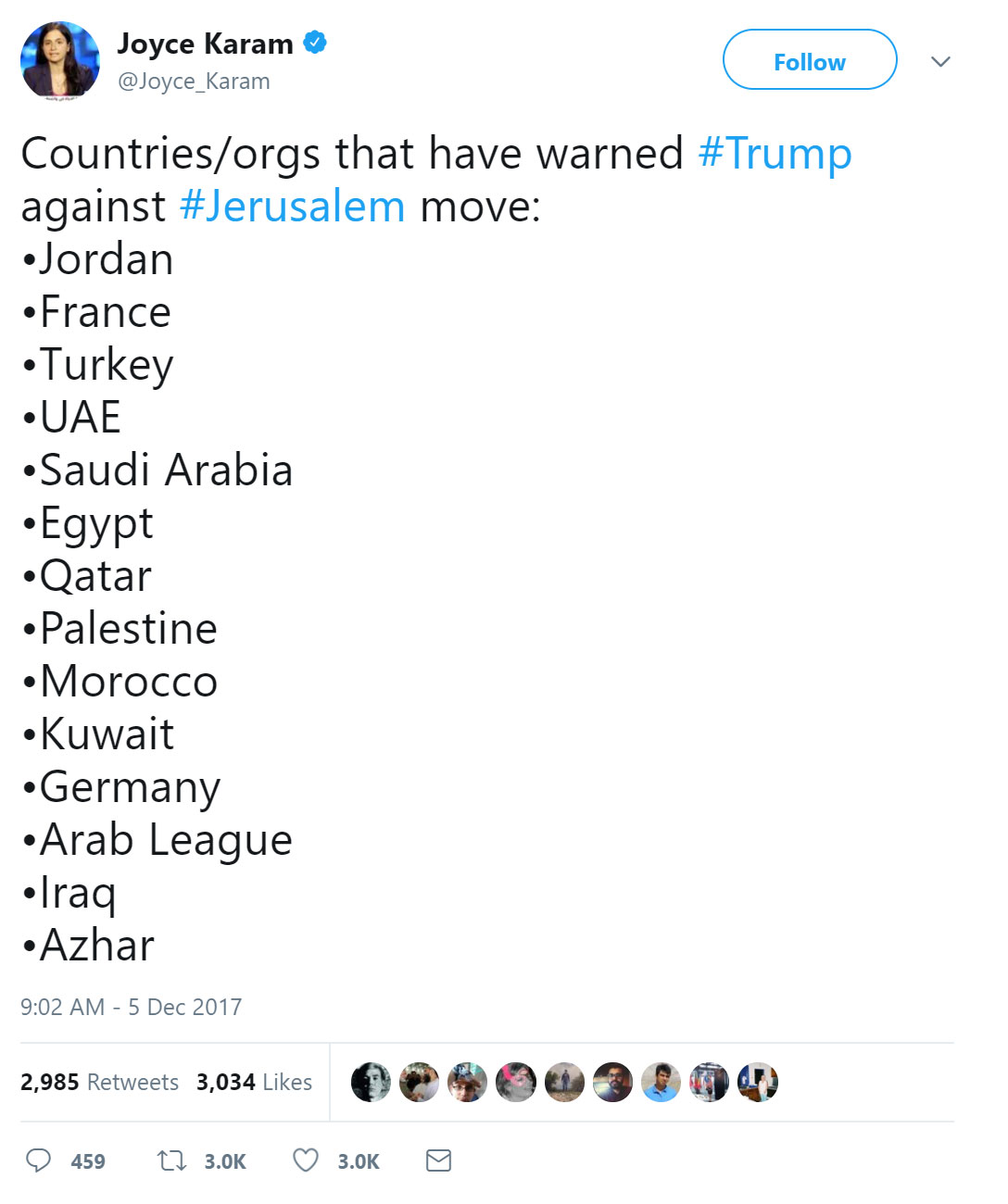 We could see this coming as this was one of the campaign promises while running for office. Even the United States Senate agreed in a 90 to 0 vote to move the embassy to Jerusalem. What was a very perplexing unexpected move, even by me, Trump condemns Saudi Arabia’s blockade of Yemen. For the first time in the years of cozy relations between these two empires, we are now seeing a breakdown in diplomatic relations. In an unprecedented move in modern history, the U.S. is taking a dangerous stance against its once close ally. Millions are dead, sick, and starving in Yemen because of Saudi Arabia’s war against Yemen. The carnage has only intensified its onslaught after these remarks, disregarding the U.N.’s demands and pleas for a cease-fire. 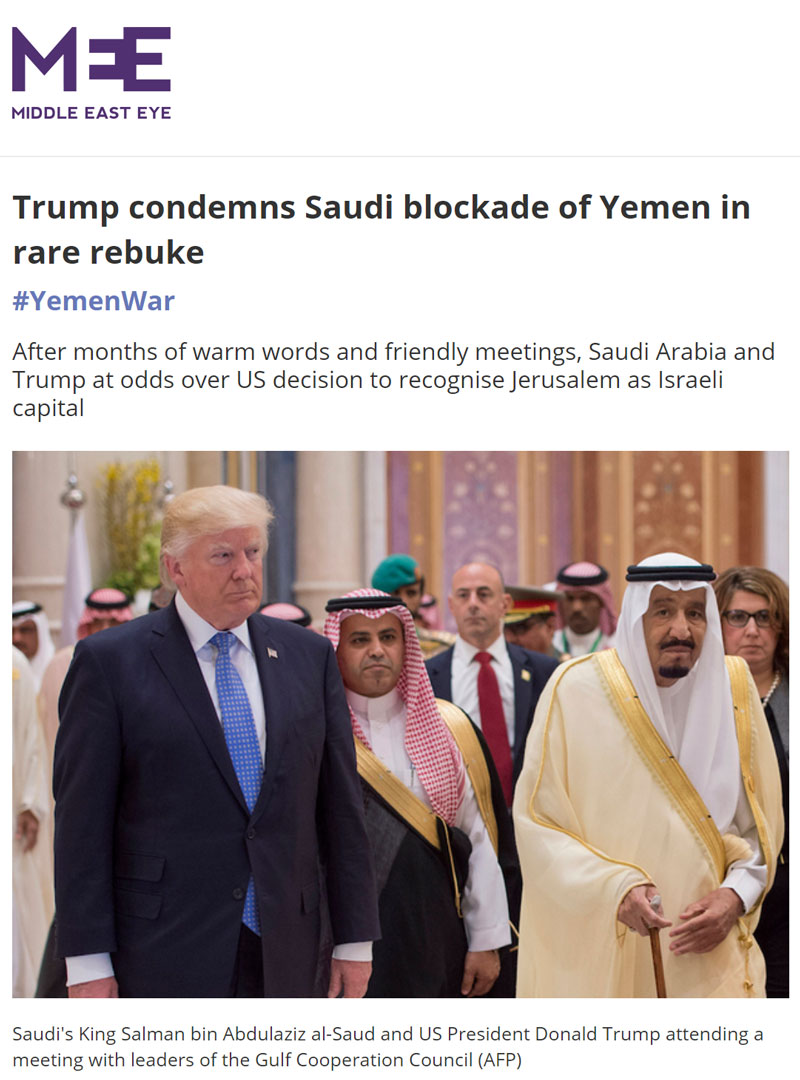 This should not come as a shocker, as we know the influence Israel has on the foreign policy of the United States government. This is definitely not being viewed as a good move by the sitting U.S. President, bringing U.S. closer to another global conflict.

Moving forward into more war news, the Pentagon admits to having four times as many troops in Syria as they initially let on to the public. This is all in a location that Syria an Russia are claiming is now fully liberated. Why is the U.S. still in Syria for an undisclosed reason and in undisclosed numbers? Who knows but they plan on staying there even when ISIS has been defeated claiming that it is to counter Iranian, Hezbollah, and other Islamic groups getting more influence in the region.

Now that the Russian Prime Minister Vladimir Putin, has claimed a victory of ISIS in the region, now states the Russian strategy now be focusing on Iraq and helping remove the terrorist threat there. This is a game of tit for tat with the United States with both sides attempting to strengthen their spheres of influence in the region. 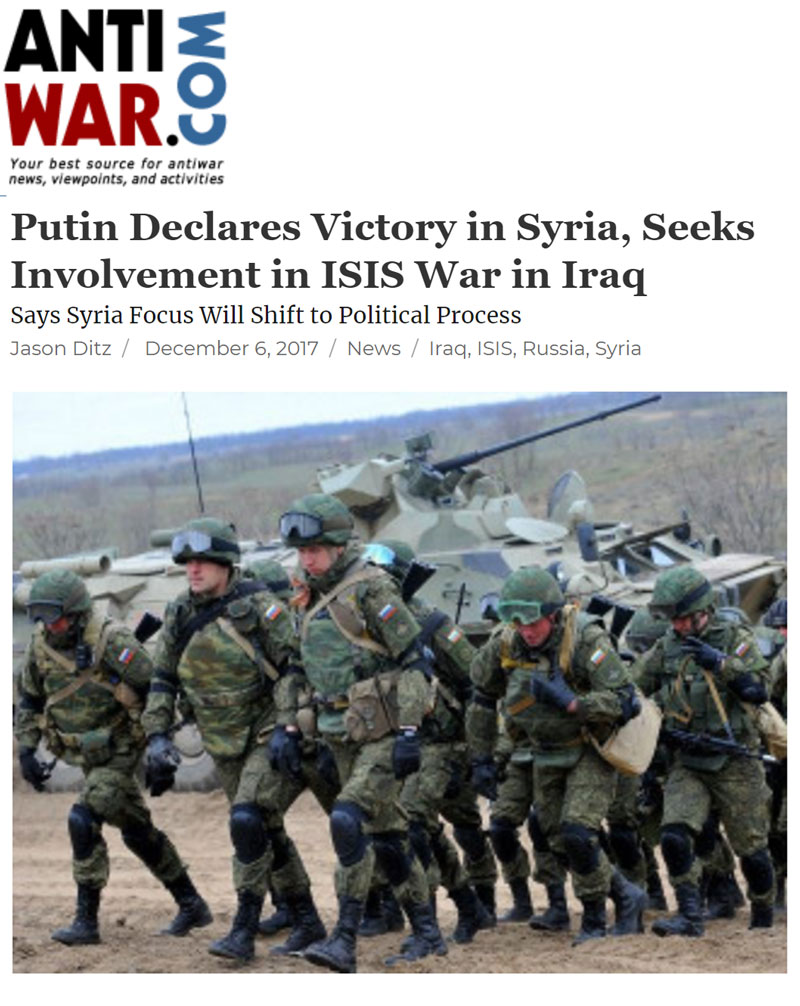 If this wasn’t enough to show that imminent doom was near, we can look to the other side of the planet, where the United States has been flying practice bombing runs as a show of force to intimidate North Korea. This posturing has, of course, pissed off the North Koreans which now says that war is unavoidable. The surprise carried out by the United States, included the most advanced U.S. stealth warplanes. If we learn anything from this situation, all the threats, saber rattling, and dry bombing runs have been nothing more than failed diplomacy making the situation much worse.

As the world continues to destabilize we move onto the financial news with Bitcoin tops its record of $19,000 per coin before plunging thousands of dollars. This proved the volatility of this market while crashing many cryptocurrency exchanges. 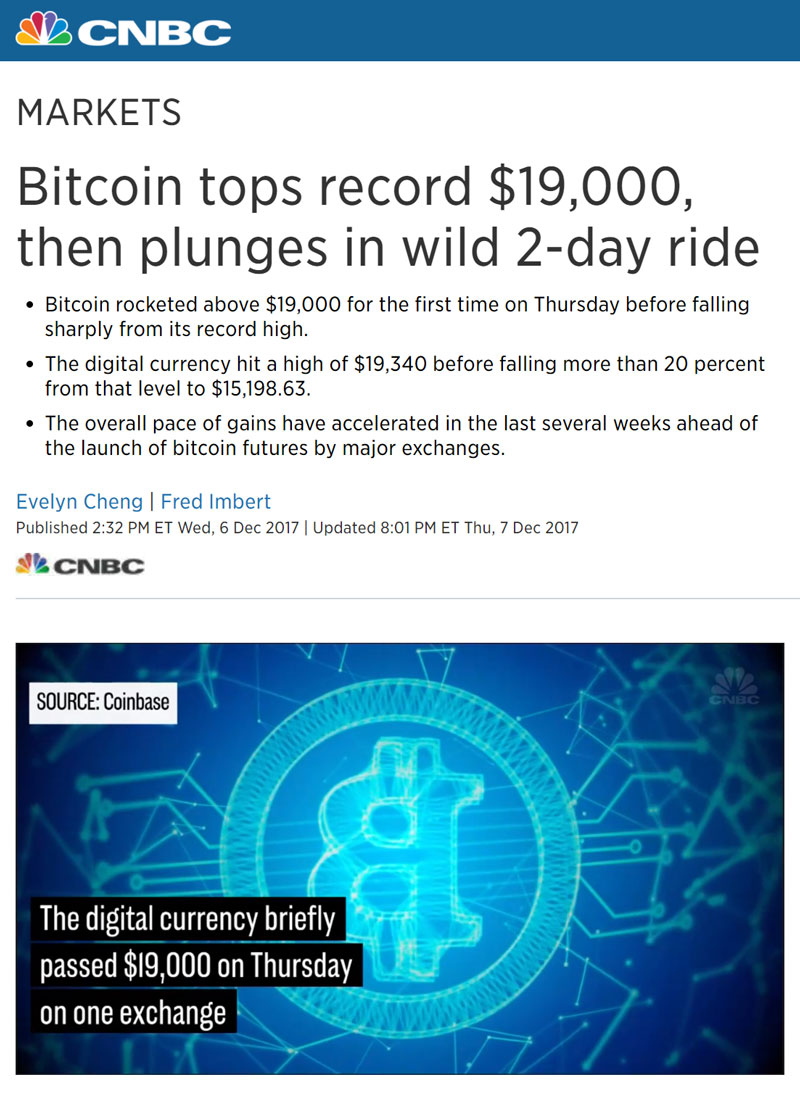 Yet even in this turbulent price market many companies and even countries are taking Bitcoin and others like it very seriously. Venezuela even announced it intends to enter the ‘petro’ into the market as an oil-backed cryptocurrency to try and circumvent the stranglehold of the Petro-Dollar scam.

We are seeing a big push by Governments and their banking backers to regulate the cryptocurrency market as they are a threat to the current financial system. A system in which more people are finding out every day that is more volatile and unpredictable as even Peter Schiff warns that Everyone is going to be wiped out, when the next bubble pops. With the U.S. Federal Reserve and it’s cycles of inflation and deflation, robbing more of your wealth with every Dollar printed, the poor and middle class are suffering more than ever. It is now being reported that the homelessness rate in the U.S. is now the highest since the beginning of the Great Recession. 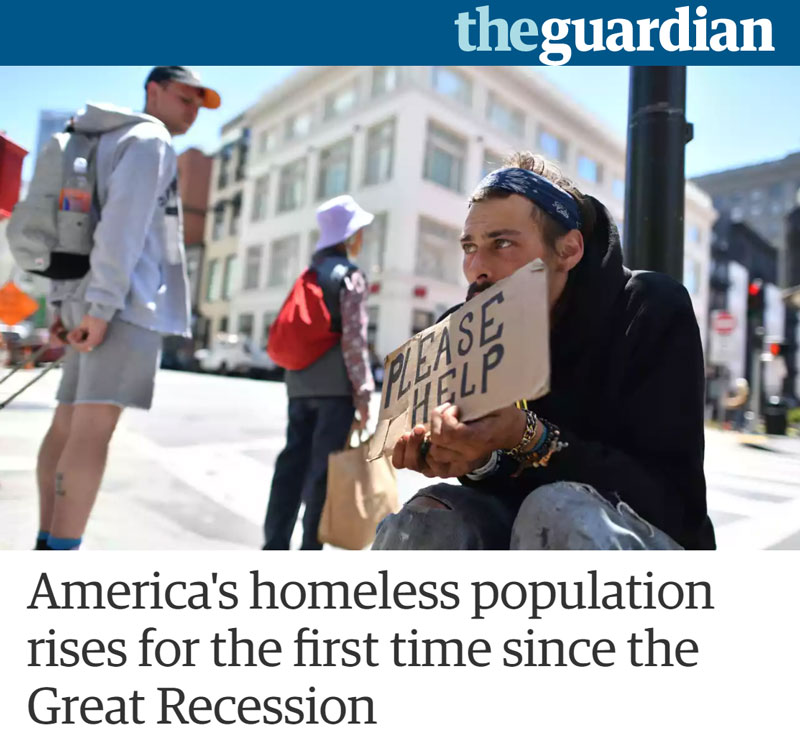 In the more uplifting news, it has been recently found after a 12-year study that owning a dog will increase your life expectancy. This study was completed at the Uppsala University where 3.4 million Swedes, aged 40 to 80, were monitored for health and the correlation of dog ownership. The conclusion was that owning a dog could potentially add years to your life and improve overall health.

Thank You for Your donations through PayPal, regular mail or Bitcoin help keep us entirely free and fully independent. That way we are fully open to give you this sort of news. If you appreciate it, please share it with your friends and family members. Let me know what you think in the comment section below and of course, stay tuned for more.