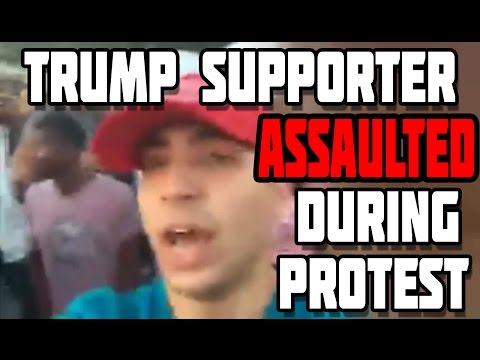 The war on free-speech continues as a Latino Trump Supporter was Physically Assaulted for Wearing a Make America Great Again Hat at El Cajon Protest.

In the video predominately self described Black Lives Matters Protesters relentlessly attack a conservative Feras Jabro who was openly showing his support for Donald Trump by wearing Trumps now Iconic “Make America Great Again” red hat through a Black Lives Matter protest. Counter protest are nothing new in the world of civil activism. The protesters angry about the recent police shooting of Alfred Olango chased the “Trump supporter while throwing bottles,” according to Fox News correspondent, Will Carr.

“I’m being assaulted just for the hat I’m wearing,” Feras Jabro  says in a separate YouTube video, in which he is wearing a red baseball cap with Donald Trump’s signature slogan.

This is more proof that the liberal Mainstream media has done a fantastic job in promoting their hate, as they claim they’re against “Hate and bigotry,” they take part in it more than any other group in the USA right now.

ter·ror·ism
?ter??riz?m/
noun
the use of violence and intimidation in the pursuit of political aims.