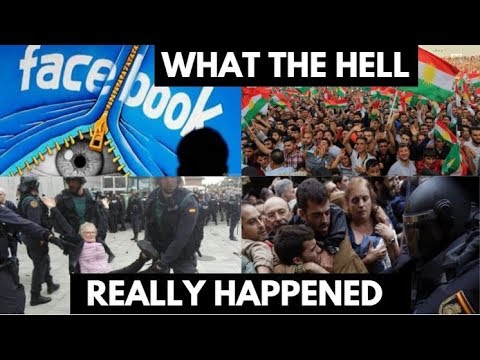 Welcome back beautiful and amazing human beings to the WeAreChange Sunday recap episode. We go over all the important news you should know about including the Catalan Independence vote. We don’t distract you with CIA propaganda about the “Rocketman” or people kneeling. This is a big distraction that the mainstream media pushes on you. 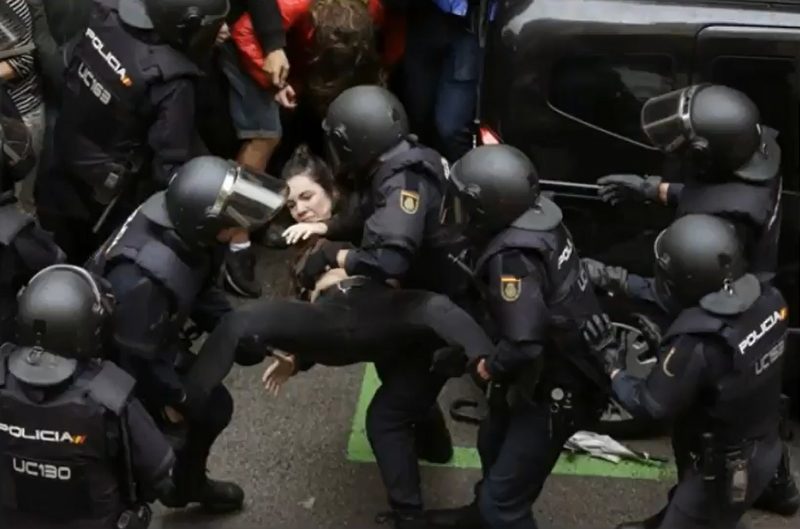 In this video I will be discussing what fascism looks like, a former UK Prime Minister committing the worst act possible, a story about police fighting other police officers and the war on drugs. Plus other things to make you critically think and inform you.

As you may know, I’ve been doing a lot of traveling lately, and unfortunately, I got sick. As a result, I just missed one of the biggest stories. That is the Catalan independence movement. In which police officers from the local Catalan and Barcelona police clashed with the national police force of Spain. These clashes took place during a vote for Catalan’s independence from the Spanish government.

It wasn’t just police officers clashing with other police but also with firefighters from the Catalan district. They got brutalized and beat by the National Spanish police who in large numbers swarmed the Catalan area to prevent the vote for independence from happening.

I have previously covered Spain’s protest movements including the “Indignados” which happened before Occupy Wall Street. I can tell you firsthand that the Spanish National Guard does not play around. They are one of the most difficult and brutal police departments in the world to deal with and I think everyone realizes that right now. 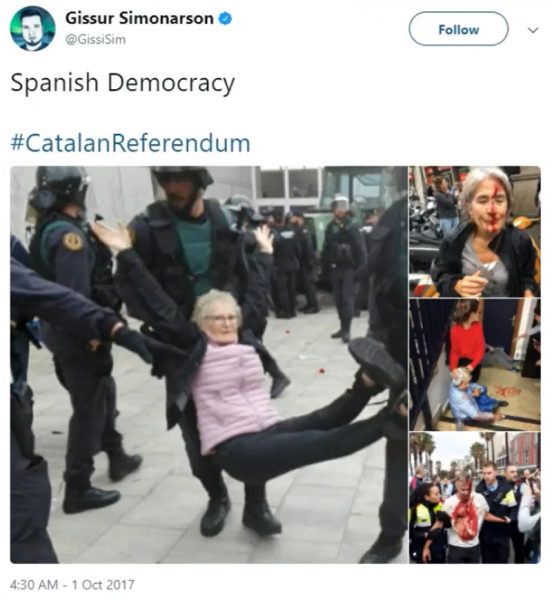 This government control was not done to protect the public from protests but direct action to prevent the Catalan Independence Referendum.

Masked men from the Spanish government and national police force came in and ripped away the ballot boxes and voting booths. They ripped them away from the people for wanting to cast their votes against the Spanish government. Leaving even the elderly beaten and bloodied on the streets of Barcelona. They even went after a man and his dog. 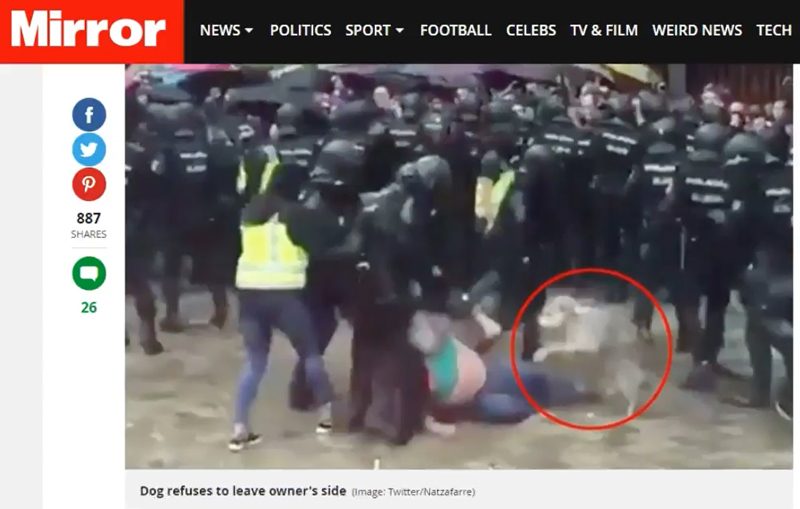 Shocking images of grandmothers with bloodied heads and masked men taking away people. Police are detaining hundreds using the pure brute force of government repression. As this government caused, chaos continues in Barcelona there are other groups singing fascists anthems and performing Nazi salutes on the streets of the Spanish Capital of Madrid. 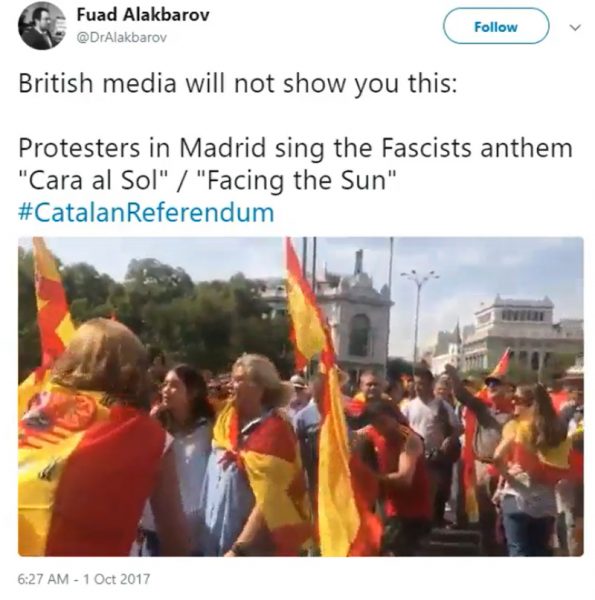 Google has lent their support to the Spanish government by censoring voting location applications. 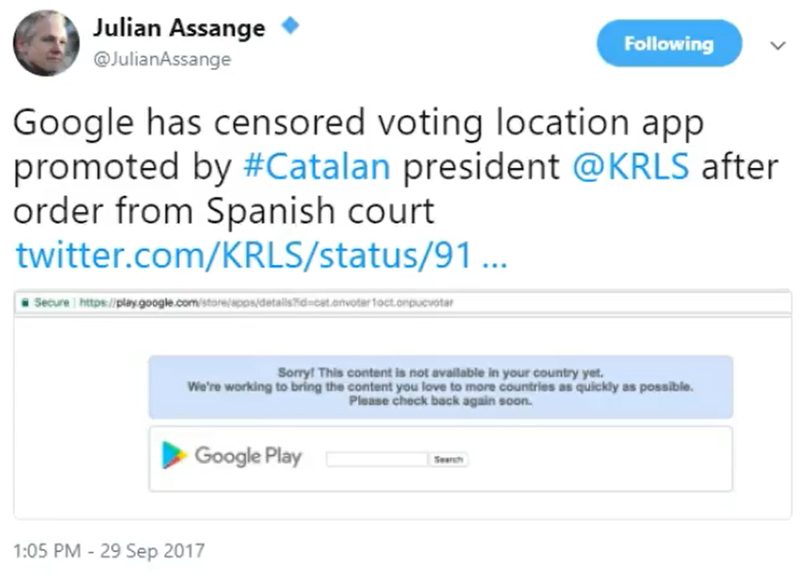 U.S. president Donald Trump and other world leaders have put their support behind the Spanish government. 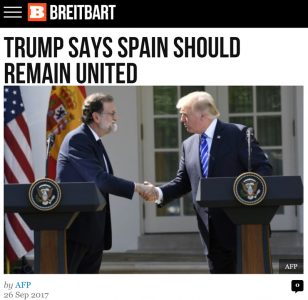 A government that not so long ago was an actual fascist regime. Tensions between the Spanish government and the Catalonia people have been ongoing for decades. Tensions have not been higher since the fall of Franco’s military dictatorship in the 1970s.

The main issues here are not only historical but economic. The Catalan government claim they pay nearly twelve billion dollars to the Spanish tax authorities each year. Money which they say does not go back to Catalonia.

The Spanish government claims that the numbers are more complicated and that there isn’t an official amount. They are also saying that the Catalan Independence vote is a violation of people’s voting rights and privacy. That the vote and referendum are “illegal.”

The more that you try to repress ideas the more popular they can become. The Catalan independence movement is now stronger than ever. I see growing international support for the Catalan people. This is likely only being the beginning of a conflict.

We will be keeping a close eye on this and hopefully, I won’t get sick next time.

The Kurdish people in the Middle East are also looking for independence. 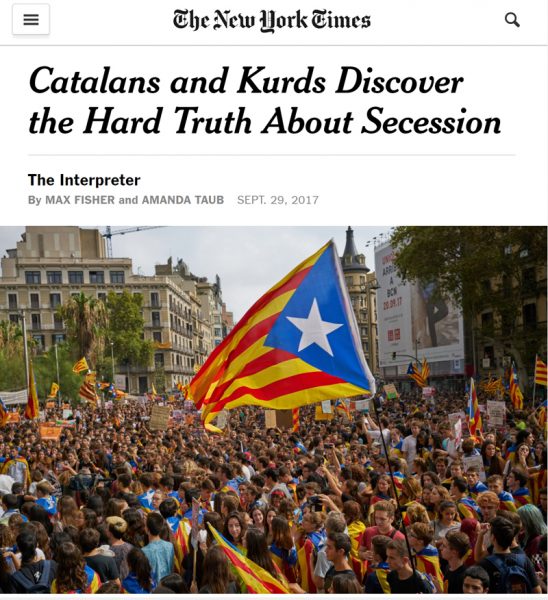 I think this is a critical story since there are several countries actively involved in the Kurdish independence movement. We do not hear much about it in the US mainstream media. Just a few days ago on September 25th, the Kurdistan region held a referendum on independence with a majority (92.7%) voting in favor of seceding from Iraq. This newly established state has gained support from many neoconservative House of Representatives members including John McCain. 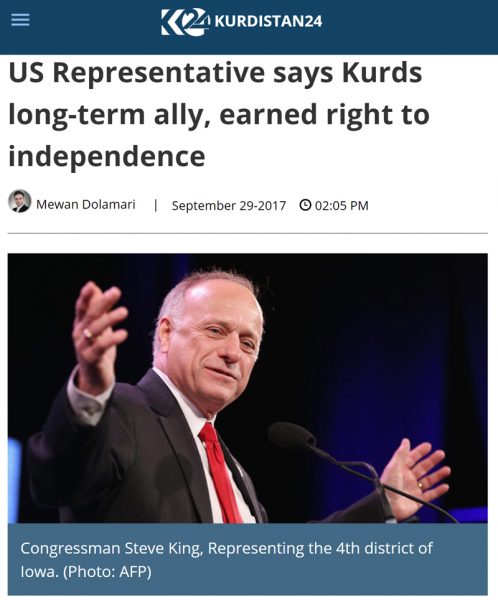 John McCain made a secret trip to Syria last week, and you know wherever he goes that something untoward is happening. Other Neoconservatives idealists like the Prime Minister of Israel president Benjamin Netanyahu have fully supported the Kurdish independence movement. If it happens would create a better geopolitical situation for the United States, Saudi Arabia, and Israel.

However, Iraq, Iran, and Turkey which have been at odds with those countries. That is why Israel supported the Kurdish independence movement. The president of Turkey claimed that Mossad supposedly interfered in their independence vote a few days ago. Israel denied this as usual. This is an important story to me because it could lead to another potential conflict in the Middle East. An area that is already riddled with conflict and sectarian violence.

Various religions that have helped make the Middle East the ruined place that it is today. Hezbollah leaders connected to the Iranian government are saying that this could lead to an internal war. This hasn’t happened so far, but the domestic implications are very grave.

Iraq does not want Kurdish independence because it would take away a very oil-rich area. 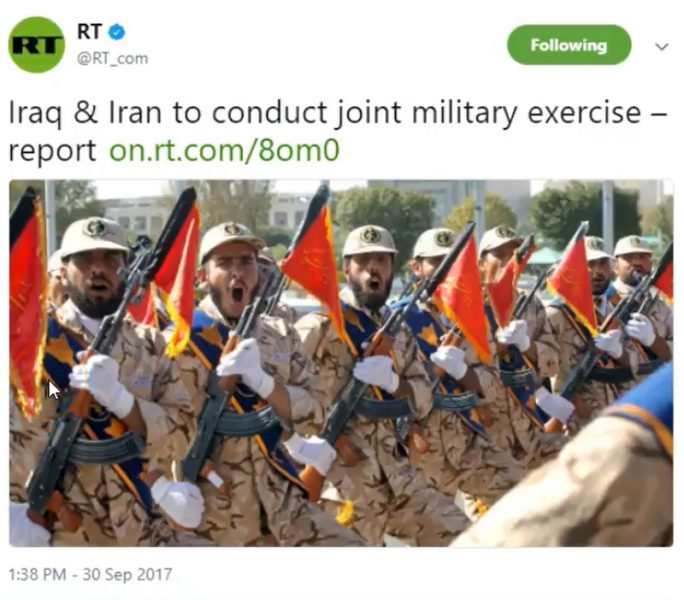 The Iraqi government has issued the Kurdish government an ultimatum ordering them to hand over their airports and control of the borders. If they don’t, they say they will issue an air embargo on the Kurdish region. This has sparked a closer alliance between Iraq and Iran which are will be conducting a joint military exercise. This is going to be a show of force against the Kurds. The Iraqi parliament authorized the Prime Minister of Iraq to deploy troops into the Kurdish state-controlled areas. We’re looking at a succession that could be far more violent than what has occurred in Spain.

Interestingly enough Partisan Girl who is very critical of the Kurds just had her Facebook account deleted.

There is also alleged video from ISIS members saying that they are forbidden to attack the Kurds inside of Syria and Iraq. This would make sense but hasn’t been confirmed.

What do you think about the Kurdish independence movement? Are you for or are you against it? I’m looking forward to your comments.

In more shocking and disturbing news today we are learning that former Prime Minister of the United Kingdom Sir Edward Richard George Heath is being investigated. According to a police report, he abused 42 children including boys as young as 11. An official investigation by the police discovered that the head of the United Kingdom was a pedophile. This should be shocking news that someone at such a high level of government could commit such atrocious, horrible acts and then never face justice for it. Ted Heath has already passed away, and he will never face any judicial system for the horrible crimes that he has committed. Lives that he has irrevocably damaged. 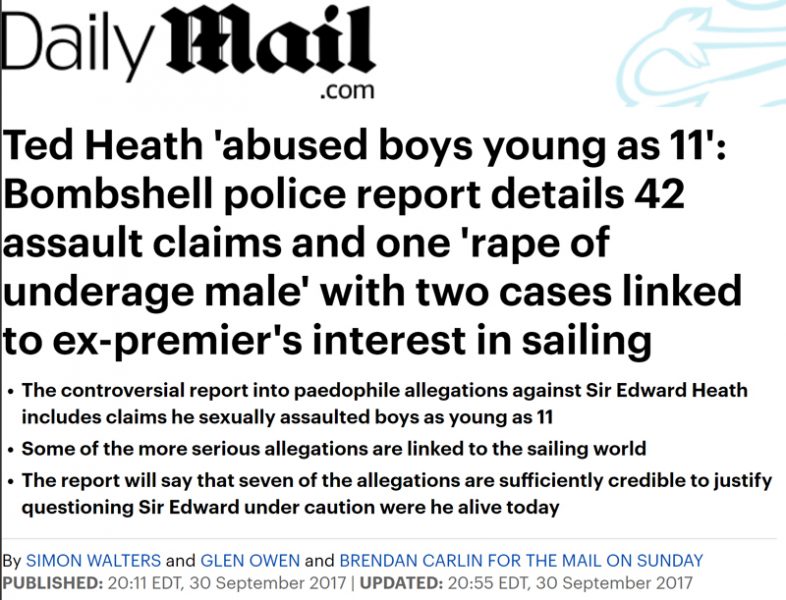 It should be shocking to everyone the numbers of pedophiles within governments. People like Anthony Weiner who was just sentenced to 21 months in prison after sexually courting a 15-year-old girl on Skype and Snapchat. The story becomes more disturbing when you learn about the various complicities involving the media and the entertainment industry. Including the BBC cover-up of the Jimmy Savile pedophile scandal. We are now seeing the New York Times statements in an op-ed entitled why they “Why I admire Anthony Weiner.” 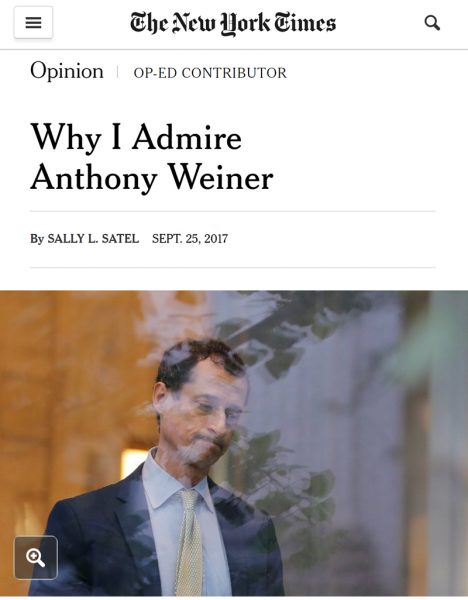 I am at a loss for words as happens so many times when doing this job. I still don’t get this. It is obvious that politicians should never be trusted. There are a lot of evil people only looking out for their best interests and often getting involved in really creepy dark magic occult stuff. This seems to happen regularly within the higher echelons of authority. Places where people appear to become addicted to power. Powers that they will do anything to keep it and expand.

We are learning that the Trump administration is now ordering Facebook to hand over private information on anti-Trump activists. The Department of Justice is demanding Facebook turn over the personal information on potentially six thousand of its users. Facebook will likely comply with this request. The federal government will have access to the personal data including private messages of nearly 6,000 users who simply liked the “Disrupt J20” page. 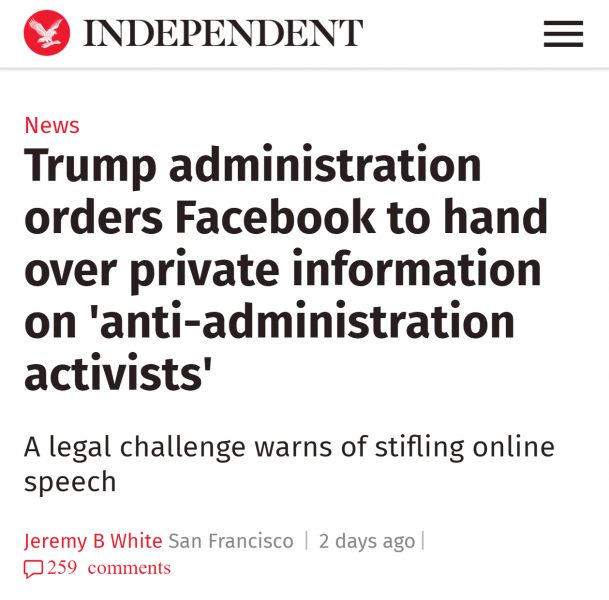 I don’t like any government authority, and I think we should all agree that this is an overstep of power. It’s crucial for Trump supporters to raise the alarms for this. If in the next election a Democrat comes in they will also have the same power and authority over you.

A report shows that the U.S. government has ruined the lives of 653242 people. 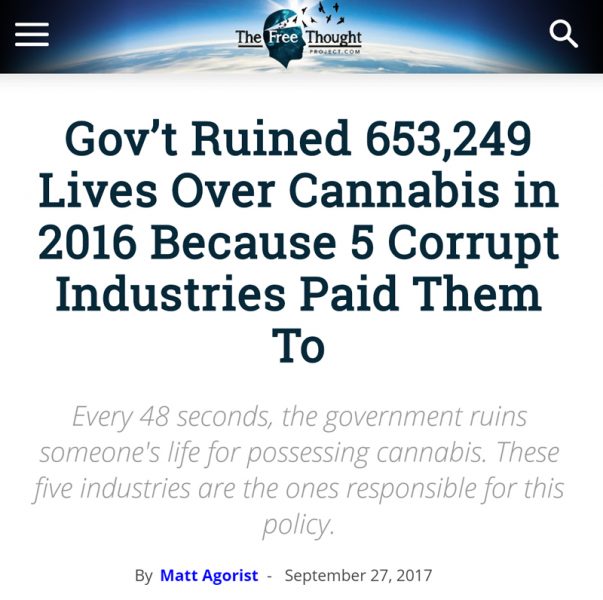 Marijuana is something that I don’t partake in, but I believe in the freedom of others to do as they wish. With cigarettes and alcohol being legal this prohibition looks as ridiculous as prohibition in the 1920’s. 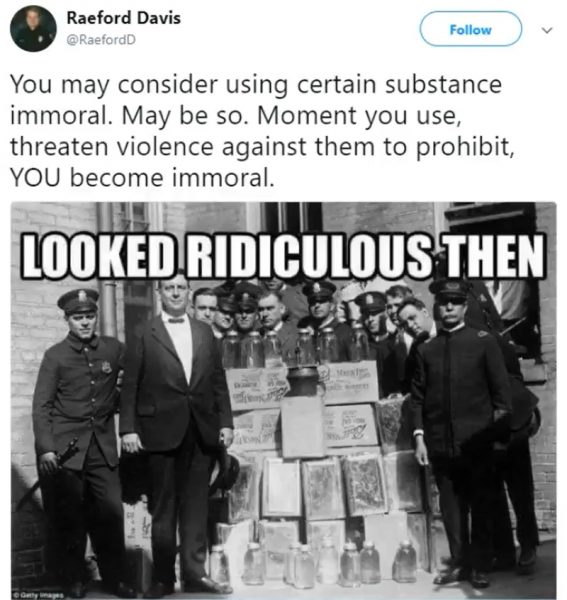 A prohibition that is being run by the police state and the prison industrial complex with help from the pharmaceutical industry. It needs to end.

People need to realize that just because “your” person of choice is in public office does not mean that you should support the expansion of their powers. Since the next government official will likely be against you and that same office will use those powers against you. State interests are likely never in your best interest.

US Senator Chris Murphy pointed out that we spend six hundred billion dollars a year on the military, but we can’t get more than 500 troops and 50 helicopters to Puerto Rico. That should make you think for a little bit about where those interests lay.

I finally have some good news. The European Parliament has banned Monsanto. The E.U. has restricted Parliamentary access to Monsanto after allegations surfaced that it unduly influenced studies into the safety of many commonly used pesticides. 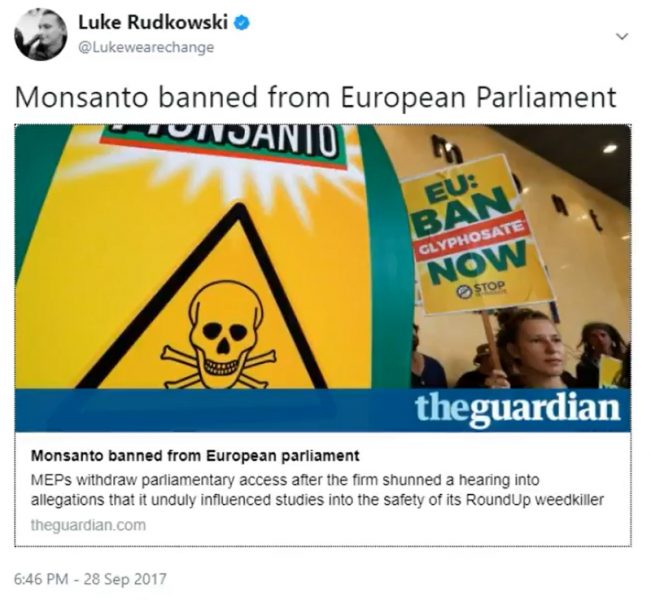 The Europeans did a good thing here since we know the power of Monsanto lobbyists and scientists. They have underhandedly allowed this mega-corporation to be one of the largest food suppliers of this world. Many of the American FDA directors were also former Monsanto executives. They won’t be able to buy government as they did previously.

That is the news for you today. Remember it is only ignorance that is allowing society to be the way it is right now. What will stop this ignorance is education. Empowering yourself and understanding what’s happening in this world. Changing your decisions that will make an impact.

That is what I believe deep down, and that’s why I do this every single day. Stay tuned, subscribe to my YouTube channel. If you want to see us grow and expand, please support us on wearechange.org/donate because unlike the whorestream media presstitutes we don’t have any corporations or governments dictating what we can say and do. We are supported by you and you alone. I love you guys. Thank you so much for allowing me to have this incredible opportunity. Stay tuned for more.