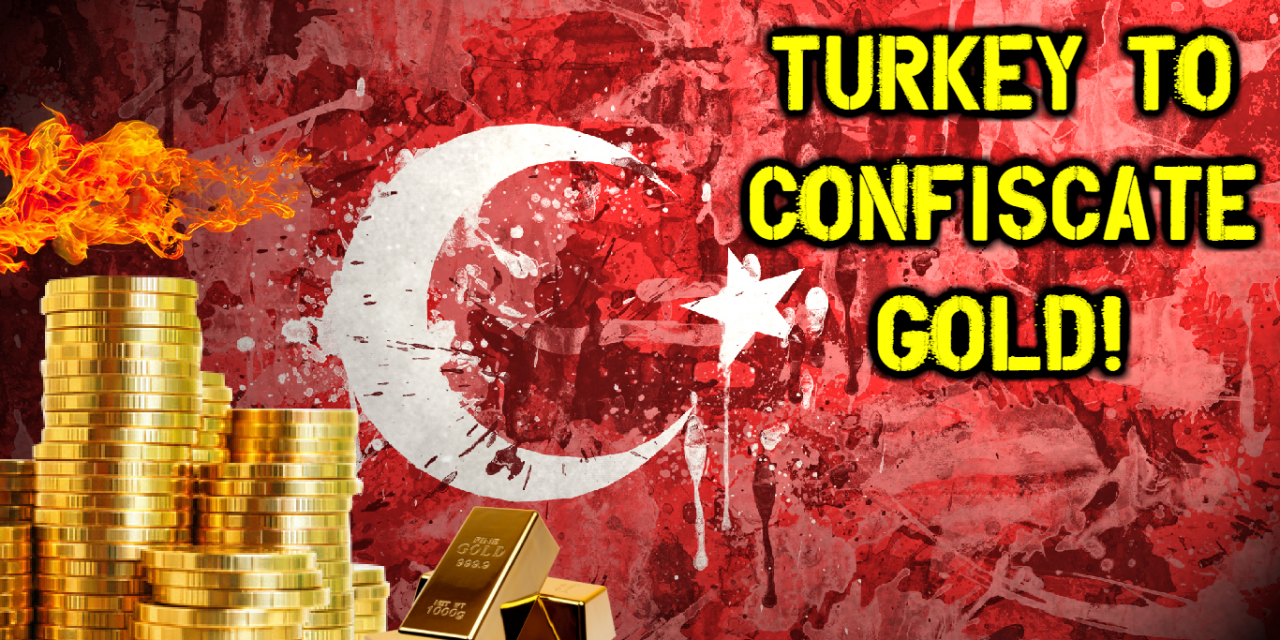 How would you feel if the government came to your door and insisted at gun point that you had to hand over your gold in return for paper? How would you feel if this promissory note they gave you didn’t actually promise you your gold back – and the government simply made risky investments with your gold leading them to lose the gold gambling with other countries and bankers while still printing out an insane amount of IOUs without the gold to back it up?

This may remind you of precisely what President FDR did in the early 1930s in order to fund the Exchange Stabilization Fund (a massive currency and commodity manipulator) and eventually the IMF.

Well, as it turns out, the Turkish government is repeating history!

In the above video, I talk with author and economic analyst John Sneisen about Turkish government’s recent push to confiscate its citizens gold and return it with paper IOUs. The plan is to create a centrally planned gold standard, but the problem is, central planning, even with sound money like gold creates inflation and debt. Not to mention the serious infringements on civil liberties the government is committing by confiscating individuals’ gold, basically, their private life insurance in the inevitable case of a global financial crisis.

On the surface the story doesn’t seem too bad, but it’s another sign of the clock ticking on the global financial system. Most likely, the Turkish government will simply make risky investments and trades with the gold and not be able to back up the IOUs they will print at a much higher pace with the promised gold. If a run on the bank happened, it would simply end with a burnt down bank with empty vaults. Just the way the vault was entered, it will be left.
While Erdogan does correctly call out the European Union, he’s a tyrant who works with the west to arm and fund “rebel groups”.
As the global order pushes for a centrally planned cashless society especially through the implementation of special drawing rights (SDRs), it’s important for us to call out central planning in general, and how important it is to have competing currencies rather than one selected, volatile, managed currency.

Currency manipulation allows the banks to push individuals collectively into vast sums of debt. Eventually, these people are in a bottomless pit of debt and the only way out of that pit is to beg the bankers and government to hand them a ladder and let them up. This means debt slaves become subservient out of necessity which is precisely the dream of a control freak. Especially a ravenous, obsessive pack of them.

This is why individuals must insure themselves and be responsible with their life and their knowledge of basic economics. This is why people should break free from state and bank control and sustain themselves with self responsibility, survival and sound money. People may laugh now, but they won’t be laughing when the inevitable global crisis arrives. Of course due to the level of manipulation in the markets and monetary system, one cannot put a date on the crash as fundamentals are off the table. However, the crash is indeed inevitable as all fiat currency eventually reverts to its intrinsic value of zero. Always has, always will. Considering we have nearly hit the thousandth year of this volatile, collectivist control mechanism going back to 1024AD in China, it’s about time we learn from out mistakes and the puppet strings of the global establishment.