Speaking at a tech conference in San Francisco on Wednesday, Twitter CEO Jack Dorsey warned that the US may be on the brink of their own Arab Spring style uprising. 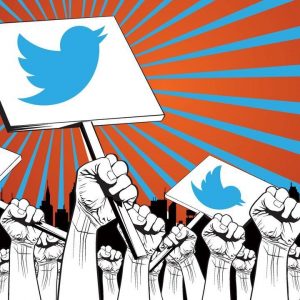 Dorsey explained that the level of political discourse, and grievances, currently taking place on Twitter in the US is similar to how it was used in the Middle East prior to the Arab Spring and the Green Revolution in Iran.

“A lot of the same patterns we’ve seen during the Iranian Green Revolution and the Arab Spring,” Dorsey said at the conference hosted by Goldman Sachs. “It was stunning to see how Twitter was being used to have a conversation about the government, with the government.”

Twitter played a crucial role in not only the reporting on Arab Spring, but also the lead up to it. In the week before Egyptian president Hosni Mubarak’s resignation, tweets regarding politics jumped dramatically from approximately 2,300 a day to 230,000 a day, in Egypt.

Dorsey explained that the first time he noticed a change in the way Americans were using Twitter was during the riots in Ferguson, beginning in 2014.

“As a culture in the U.S., we’ve focused on things that didn’t matter as much. Now, everything is brought into perspective, and Twitter is at center of the most important conversations,” he said.

While Twitter plays a massive role in political discourse in the nation, particularly with President Donald Trump using it as a daily megaphone to directly reach the public, the company seems to be unable to find a way to profit off of it.

“Last week, Twitter posted the slowest revenue growth since it went public four years ago, sending shares down more than 10 percent on fears that rivals Snapchat and Facebook were winning the war for advertising,” The Daily Mail reports. “Revenue from advertising fell from a year ago and a 4 percent year-on-year rise in users to 319 million fell short of Wall Street forecasts as well.”