Update(11:56ET): The White House is considering Russia’s Sunday attack on Ukraine’s base at Yavoriv, which lies a mere 10 to 15 miles from NATO member Poland’s border, a dangerous escalation aimed at the West, also given that only until last month US National Guardsmen were present there reportedly training Ukrainian troops.

US national security adviser Jake Sullivan warned upon news of the attack which killed an estimated 35 people that NATO stands ready to respond “with full force” if Russia attacks NATO territory. “If there is a military attack on NATO territory it would cause the invocation of Article 5, and we would bring the full force of the NATO alliance to bear in responding to it,” he said to CBS News. Russia fired an estimated 30 missiles at the base which lies a mere minutes by car from Poland’s border:

“All I will say is that if Russia attacks, fires upon, takes a shot at NATO territory, the NATO alliance would respond to that.”

Specifically he was invoking a scenario whereby member state Poland would suffer a hit, which also leaves open the dangerous possibility of a major Russia-West war erupting based on a possibly ‘errant’ or stray missile scenario.

Photos from the Yavoriv training area in Lviv that was targeted by Russian missiles today.https://t.co/PpSwtpgjqD pic.twitter.com/5NcWijHAlW

He also said the US was warning Russia directly against using chemical weapons, adding that if Vladimir Putin did deploy weapons of mass destruction, it would be a “shocking additional line” that he had crossed in international law.

The proximity of the site of the attack to Poland’s border: 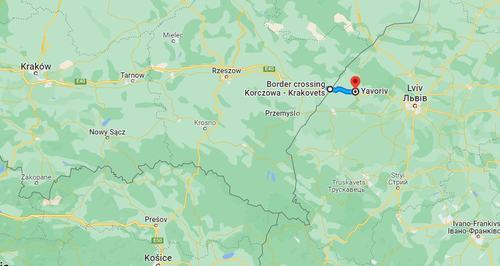 US and NATO have held trainings at the military base in Yavoriv, Ukraine for years. Today it was bombed by Russia pic.twitter.com/QmXOwMPWjg

Meanwhile, this is certainly not a time – at a moment the world is alarmed over a possible WW3 scenario erupting from this conflict – for America’s number two leader to be confused about where NATO territory is and isn’t…

So our precious @VP believes #Ukraine is in the #NATO? Tell her to come tf home. pic.twitter.com/riRu8esiRo

Starting by Thursday and Friday, there began to be an alarming uptick in Russia striking targets in Ukraine’s West near the border with Poland, in what we and others described a likely “message to NATO” warning against outside intervention from Western countries.

On Sunday there are fresh reports of more major attacks, this time coming a mere ten miles from the Polish border, following the heels of the Kremlin warning NATO that its military will strike any external arms shipments that are inbound.

The Wall Street Journal, citing Ukrainian sources, said 35 were killed at a military training center: “Eight missiles hit the facility at Yavoriv, a base where until last month the U.S. National Guard trained Ukrainian troops,” the report says. “Shortly after the strike, ambulances were seen rushing toward the base, and troops were seen leaving.”

“Footage on social media showed destroyed buildings and a parade ground strewn with debris, with smoke rising from the ruins,” WSJ continues. “The strike injured 134 people and destroyed and damaged some barracks, according to the governor’s office in Lviv.”

The fresh attack on Yavoriv is being taken also as a clear warning to Washington, again given it was a well-known site which previously housed US military trainers engaged in short-term missions to support Ukrainian national forces prior to the invasion began. Training was going on up until earlier in February.

Setting the stage for a potential major escalation with Western and NATO powers, the Kremlin warned on Saturday that the Russian military is prepared to target Western arms shipments that are continuing to pour into Ukraine. Russia’s Deputy FM Sergei Ryabkov said on state TV that Washington had been informed in the last days that Moscow will see weapons supply convoys entering Ukraine as “legitimate targets”.

“We warned the United States that the orchestrated pumping of weapons from a number of countries is not just a dangerous move, it is a move that turns these convoys into legitimate targets,” Ryabkov said in the remarks, which served as a severe warning to the West. 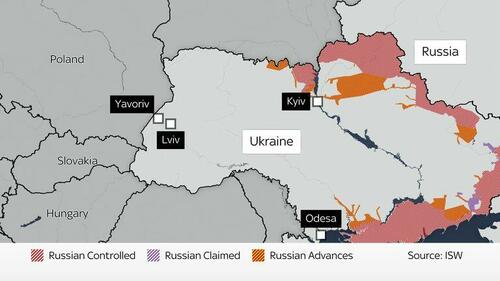 The Sunday action against a training facility so close to the Polish border comes as “Moscow has shown off its ability to bomb targets throughout the country even as its ground troops near Kyiv have faced setbacks” – the WSJ underscores of the attack.