While we saw as recently as Friday what happens when the market gets overly optimistic that a Ukraine ceasefire is imminent, only to get the rug pulled from underneath it just hours later with stocks initially spiking only to crater a few hours later… 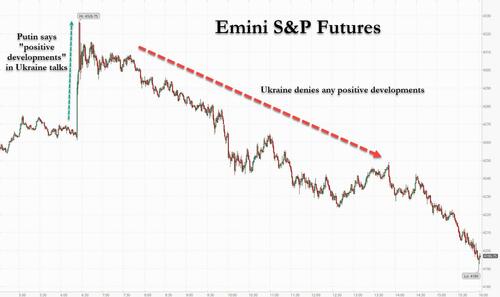 … on Sunday – day 18 of the Russia-Ukraine war – we are getting the same distinct case of optimistic deja vu, as delegates from both sides of the Ukraine peace talks sounded positive ahead of more negotiations in the next few days. It remains to be seen if this is the start of a peaceful resolution to the war or just another false dawn.

“We will not concede in principle on any positions. Russia now understands this. Russia is already beginning to talk constructively. I think that we will achieve some results literally in a matter of days,” he said in a video posted online.

To clarify. At the negotiations, the RF not putting ultimatums, but carefully listens to our proposals. ?? will not give up any of the positions. Our demands are – the end of the war and the withdrawal of RF troops. I see the understanding and there is a dialogue. pic.twitter.com/72ae9ZeOfn

At the same time, Leonid Slutsky, member of the Russian negotiating delegation and head of the State Duma Committee on International Affairs also said there had been significant progress and they hoped to soon arrive at a “joint position”, Sky News reports.

According to the state-owned RIA news agency said that when Slutski compared the state of talks now with those when they first started, there had been “substantial progress”.

“According to my personal expectations, this progress may grow in the coming days into a joint position of both delegations, into documents for signing,” Slutsky said. It was not clear what the scope of any such documents might be.

As Slutsky pointed out , the agreements between the parties will help reduce tensions and “save many people.”

Three rounds of talks between the two sides in Belarus, most recently last Monday, had focused mainly on humanitarian issues and led to the limited opening of some corridors for civilians to escape fighting. This comes a day after the French and German presidents, Emmanuel Macron and Olaf Scholz said Vladimir Putin did not show a willingness to end the war during a call on Saturday.

The peace process is also getting a fresh kick start after Bloomberg reported that the U.S. and China will hold the first high-level, in-person talks since Russia’s full invasion of Ukraine, as the Biden administration continues to try to enlist Beijing to exert influence on its neighbor to end the crisis.

National Security Adviser Jake Sullivan will meet in Rome on Monday with China’s top diplomat, Communist Party Politburo member Yang Jiechi, according to a person familiar with the details of the plan.

President Joe Biden’s top advisers have been working to increase pressure on China to enforce sanctions on Russia’s economy imposed by the U.S. and its European and Asian allies. So far, U.S. officials have said they haven’t seen evidence that Beijing has tried to circumvent them, although that just means that they haven’t looked hard enough.

In any case, if China does agree to mediate talks, it  would be seen as a significant development toward peace. Then again, since the Biden admin has little to gain from an accelerated return to normalcy ahead of the midterms – after all the inflationary impulse will be here to stay well into 2023 – especially if the president can no longer blame Putin for everything that is wrong in the US domestically, we expect that this glimmer of hope will be promptly dashed over the next 24-48 hours.