According to the regional newspaper The News & Observer, photographer Wes Snyder captures what appears to be a mysterious object in the night sky.

“The object was visible for just under 3 minutes total, so I doubt it’s a meteor, (or) shooting star as those typically only last a few seconds,” Snyder posted on YouTube.

Judging by the video, the object appears to have corners. Here’s the video in full.

“I spent a night at the Cape Hatteras Lighthouse shooting time-lapse photos to create an upcoming video. While I was looking through my footage, I realized there was something in the video that I could not explain,” he wrote on Facebook. “It’s much larger than your typical plane appears, and it’s moving way faster than clouds.” 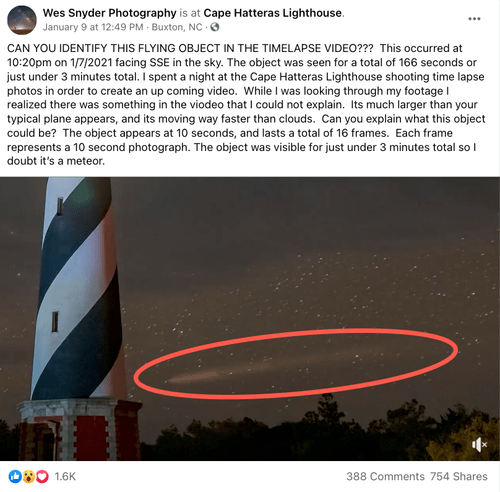 Snyder said the best explanation is that it may be “space junk or a satellite burning up in the atmosphere.”

“It’s not a meteor,unless somebody reported one crashing somewhere within the surrounding towns or counties, cuz it was way to close. Anybody with common sense knows that it cannot a shooting star. WavyTv 10 did a special a while back about the pilots at Norfolk Air Force Base and the unidentifiable things they have witnessed over the years. So I’m gonna say it’s Extraterrestrial. I bet that the airport on Hatteras Island would have some sort of record of it. So would NASA and the Air Force Base,” wrote Regan Wynne.

Someone else wrote, “I’d say the best bet would be a stage of the space x rocket.”

Another said, “Space station or a satellite fly by.”

Authorities have yet to identify what exactly flew by the Cape Hatteras Lighthouse.

But with the recent CIA dump of UFO files, it certainly makes you wonder if life beyond Earth actually does exist.