Ukrainian farmers have been stealing tanks and other Russian military equipment with their tractors. Videos have surfaced online in recent weeks, and the question many have asked is what happens with all the captured war machines?

It just so happens that the Ukrainian parliament (also known as Rada) passed a new measure rewarding anyone, even Russian soldiers, to turn over equipment to Ukraine for a reward.

“For a helicopter – 500 thousand dollars, a tank – 100 thousand, respectively. If, for example, someone is ready to come to us by plane – it’s a million dollars,” the first vice-speaker of the Ukrainian parliament Oleksandr Kornienko said in a statement Saturday.

Here’s a complete breakdown of Ukraine’s reward system for the voluntary transfer of Russian military equipment to the Ukrainian Armed Forces (all prices are in USD): 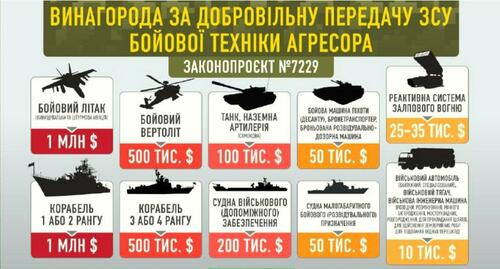 Kornienko said Russian troops would be motivated to hand over the weapons to “replenish their financial status” and their “misunderstanding of the meaning of why they are dying.” He added: “the reward tool will work.”

This is certainly an innovative way to buy weapons at a discount. Ukrainian farmers stand to make a killing.