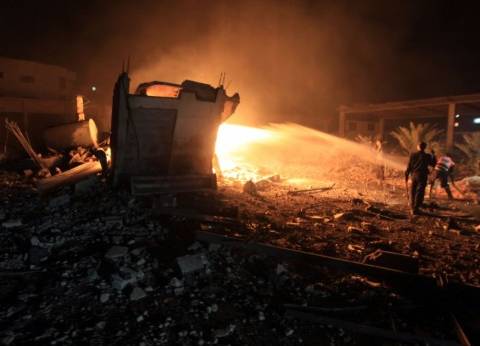 There are initial unconfirmed reports that at least twenty U.S. armored vehicles and an unknown number of troops are amassing in Jordan to invade Syria according to several prominent Syrian social media accounts. Since the Trump administration now reportedly has a policy of not informing the public about the number of troops in Iraq and Syria, it is difficult to confirm reports about the movement of troops in Syria.

Some US troops on the Jordanian borders with Syria are standing by with Jordanian special forces, the reasons unknown yet.

Massive explosion on the #Jordanian/#Syria-n border. US is beating it's chest. We are not afraid nor will waver. https://t.co/yLAT0R9xSf

Reports of US tanks & troops entering #Syria from northern #Jordan. This comes after a meeting between #Trump & Jordan's King Abdullah pic.twitter.com/6NHusASPss

UPDATE: The jets seen are Jordanian, and are monitoring after the #ISIS attack on an #FSA checkpoint near Rukkab Refugee Camp.

BREAKING: US armored vehicles entered #Syria from Jordan. Whether this is a routine illegal incursion or something bigger remains to be seen

According to the editor in chief Paul Antonopoulos of Al-Masdar a Syrian news agency the activity is normal and should not cause alarm.

Everyone, keep calm for now. The US often illegally enters #Syria from #Jordan. 20 Armored Vehicles is nothing…..

According to multiple reports, there were 400 troops sent into Syria in early March. These armored vehicles, then, should be expected to be used as support for these troops, and however many others are in the country.

I must highlight. I never said US vehicles entered, I was just calling for calm so we know what is happening. Still no reports they entered.

A massive explosion took place at the Jordanian border crossing in Dara’a tonight, as a car bomb was detonated at a local checkpoint near the Al-Rukban Refugee Camp according to the news agency.

At least 10 people were reportedly killed or wounded by the bombing according to local activist Syrian media Al-Masdar reported.

Intense clashes then broke out between the Free Syrian Army (FSA) and an unknown militant group that is suspected to be comprised of Islamic State (ISIL) members in southern Syria.

A reporter has alleged a soldier from Regiment 54 said that “his unit targeted a U.S. reconnaissance plane flying over their base in Al-Qamishli.”

A soldier from Regiment 54 is now saying his unit did in fact target a US reconnaissance plane flying over their base in Al-Qamishli.

If reports are true, this action comes after President Donald Trump met with King Abdullah.

(This Is A Developing Story Check Back For Updates)