Approximately half a dozen former health policymakers – including members of Biden’s transition team – have come forward to declare that the Biden administration’s Covid-19 policy has gone off the rails and needs an ‘urgent strategy reset.’

He calls it the “pandemic of the unvaccinated,” but that’s only confused boosted Americans home sick with the omicron variant.

And the administration hasn’t changed its guidance to urge high-filtration masks despite calls from the medical community, while recent isolation guidance has only added to the uncertainty. –NBC News

Indeed, current policy now seems to be a shoot-from-the-hip combination of bad kneejerk policy based on early pandemic response and deadlier strains (primarily affecting the elderly and those with multiple comorbidities, as CDC Director Rochelle Walensky recently admitted) – and new policy which doubles down on vaccination against a new strain despite its far more mild presentation and vaccine evasion.

Meanwhile, the administration’s last desperate argument for getting vaccinated ‘to avoid serious illness or death’ has been very clearly rendered moot by Omicron. 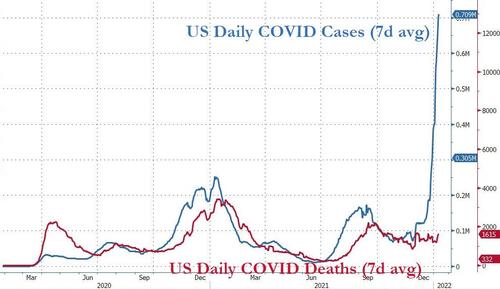 According to the former health policymakers, the Biden administration could ‘rapidly lose credibility with the public.’

“Biden was elected president, in large part, based on a message of ‘I’m competent, I’m capable, I will tell you the truth and I will get a handle on Covid in a way my predecessor could not and refused to do,” according to former Obama Health and Human Services secretary, Kathleen Sebelius.

“I do think it’s about competence and capability and telling the truth and using all of the tools that are at the president’s disposal,” she added.

Yes the media and the CDC waited until midterms under the Biden administration to acknowledge that vaccines don’t stop the spread, cloth masks don’t work, lockdowns harm children, and not all deaths with covid are deaths from covid — but the timing is a coincidence I assure you

You know it’s bad when this lady turns on Biden…

The CDC is facing a real crisis of trust. They can help restore trust by changing processes. Be transparent about how decisions are made—what’s driven by science vs practicalities. Also, begin w draft guidelines & allow stakeholder input. It’s not too late but a reset is needed. pic.twitter.com/ShXK255Wou

She told NBC News: “In terms of the communication and the trust in the CDC, it feels like we have gone backwards.”

Two years of conditioning people to avoid Covid like the plague has now resulted in mass disruptions throughout the entire global economy. So when the hyper-virulent Omicron strain seemingly appeared out of nowhere (*cough*) at just the right moment to beat back Delta, the response has been to hunker for dear life despite the Omicron experience being akin to a moderately bad cold for most people (and for others, they don’t even know they’ve had it).

the rapid spread of the variant has created a level of disruption in many Americans’ lives not seen since the early days of the pandemic. Staffing shortages have forced schools and businesses to close and have led to absences in police and fire departments with large numbers of sick first-responders. Airlines have canceled thousands of flights because of staffing shortages, transit systems have shut down bus and subway routes, and the surge in cases has once again crippled the cruise industry.

The demand for testing has overwhelmed the country’s capacity in places that are hardest hit, creating long lines and delaying results for days.

At-home tests are still in short supply, and the administration was widely criticized last month for what appeared to be confusing recommendations for those infected as cases soared. –NBC News

According to the health experts, the Biden admin recommends preparing Americans to simply accept Covid as part of life, while trying to keep people out of the hospital by promoting vaccinations (heaven forbid they tell people to lose weight and eat healthy).

“There’s agreement that the messaging has to be better and that it would be important to be simpler for people and more targeted towards what people need and action guided,” said Ezekiel Emanuel, a key member of Biden’s transition team and a former health policy adviser to the Obama administration (and the brother of Rahm Emanuel and the real life “Ari” from Entourage).

“I think we just need a clear message so people know what the ‘to do’ is.”

In yet another example of empty promises, Biden committed to sending 500 million free at-home Covid tests to Americans (and now he’s making insurance companies pay for it) – yet it will take months for them to be able to procure and distribute that many tests. On Monday, the administration announced that insurance companies and group health plans would be responsible for the cost beginning Jan. 15.

“There has to be an admission at the federal level [about] what is not going well now and frankly, we have a testing mess,” said Sebelius. “While I think the president stepped up in the beginning to purchase the test kits and get them to people, even mail them to people, we’re late to this game for a whole variety of reasons. The United States has not done well on testing since March of 2020. That’s a problem and I think it needs to be said out loud that it’s a problem because that’s what a lot of people are experiencing every day.”

On the political front, Biden could be better off acknowledging the virus is here to stay, despite his repeated promises as a candidate that he would “shut down the virus,” said Paul Maslin, a Democratic pollster. -NBC News

“Is Covid ever going to be the great success Biden or his people or any Democrats had hoped it would be? The answer’s no,” said Maslin. “He’s lost the opportunity of making it a great success.”