VIDEO: LUKE RUDKOWSKI- LIVE AT MAY DAY PROTEST IN PARIS

Luke Rudkowski is live on the ground in Paris, France, covering the May Day protest. The atmosphere is very tense and getting out of hand.

There has been more than one protest in France recently; people have been taking to the street to march against Marine Le Pen and her party the National Front. Six days ago Marine Le Pen announced she is temporarily stepping down as leader of the Front National to concentrate on her presidential bid. Ms Le Pen, who wants to pull France out of the European Union, is one of the top contenders in France’s election.

The first round of the 2017 French presidential election was held on 23 April 2017. As no candidate won a majority, a run-off election between the top two candidates, Emmanuel Macron of En Marche! and Marine Le Pen, will be held on May 7th 2017.

French protesters do not tolerate being filmed! Projectiles can be heard in the background as well as a loud explosion which causes Luke’s camera to fall to the ground. The words “Get back, get back!” can be heard.

Me and @Lauren_Southern had our cameras knocked out of hands today in Paris a number of times, these protestors really don't like the press pic.twitter.com/DqoEN8CSdR

Lauren Southern is also reporting from Paris today and tweeted out this photo of property that had been set on fire.

18:47 – Luke says “Welcome to Paris! There’s this one guy over there on the ground getting arrested. The protesters saw that and that’s when they swarmed in to try to help the guy who was on the ground, who was being arrested. As you can see, riot cops are in full gear today, they are not playing around!”

Still image from Luke’s video of the mortar exploding near him as he reports! 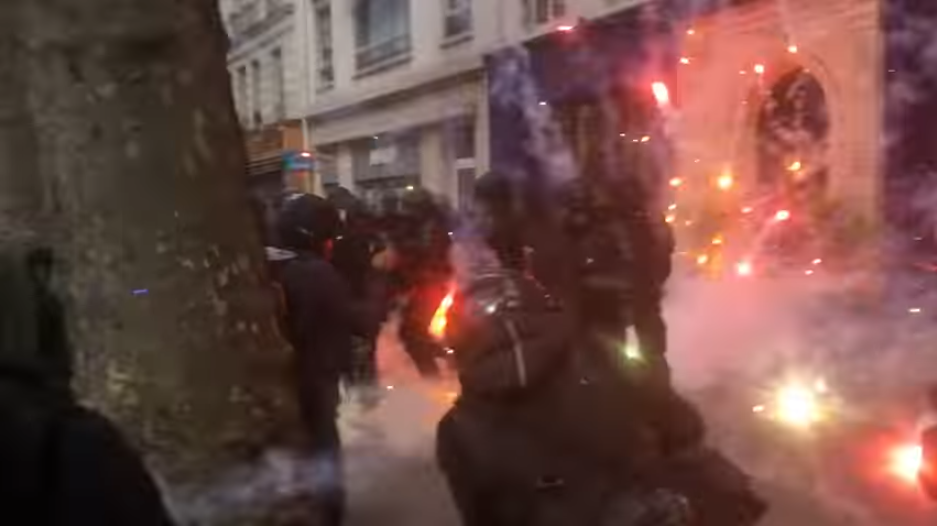 These are just 2 screenshots from the videos I uploaded today on https://t.co/zMzdwLXpMj from May Day in Paris pic.twitter.com/uE1UTEesTF

Protests have been violent in the last few months in France. An example here from February:

?????? #France: Things that system media do not show you. Brutal violence against police officers in #Paris at the weekend. pic.twitter.com/sDKBKCTNeg

This page is live and will updated throughout the day so stay tuned to We Are Change for more developments as they happen!

If you liked today’s broadcast, please consider donating to us. We have a whole team of writers behind this operation, not just Luke.  YouTube and Google Adsense are both severely hindering our ability to keep this operation going. We won’t be able to continue to bring you broadcasts like this if things keep up. You can donate here on the website or on our patreon. Thank you and remember We Are Change.