“They’re Experimenting On Us”: Why So Many Black New Yorkers “Don’t Trust The Government With Their Health”

Many Americans who haven’t been paying close attention to the vaccine rollout could be forgiven for believing that those who are refusing the COVID vaccines are mostly uneducated (and, dare we say, ignorant) whites, often supporters of former President Trump. But while vaccination rates are, generally speaking, higher in a handful of big blue states, these numbers belie some important truths. As we reported earlier this week, one study showed that Americans with undergraduate and graduate degrees are intensely skeptical of the vaccine.

Additionally, minorities, particularly black and Hispanic Americans, are broadly skeptical of the vaccine, a fact that we have been reporting on for some time.

To try and explain this away, progressives have dismissed this hesitancy as the inevitable legacy of historic abuses whereby black Americans were experimented on and mistreated by the US governent (the now-infamous Tuskeegee Experiment is one such example).

As the data below show, blacks – particularly younger to middle-aged blacks in the 18-44 range have rates of skepticism that are unmatched by any other ethnic group except for Native Americans. 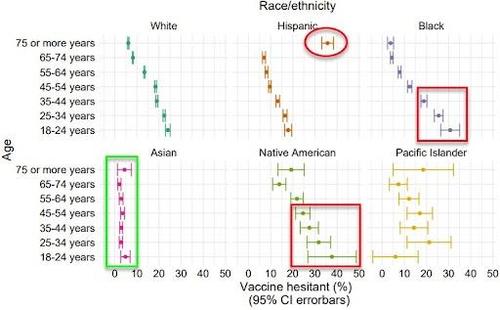 Does make one wonder about vaccine mandates in liberal states…

But instead of relying on ‘experts’ and the conventional wisdom, the NYT decided to send a few reporters out into Brooklyn, Queens and the Bronx to talk to “authentic” black voices and find out straight from them: why is only 28% of NYC’s black population in the 18-44 age range vaccinated?

Well, after interviews with “dozens of Black New Yorkers”, the NYT determined that hesitancy among Black New Yorkers is rooted in a litany of reasons, most of which boil down to this: “during these uncertain times they could not trust the government with their health.”

Ironically, since the virus hit working-class minority neighborhoods the hardest during the first wave, many in these communities believe the worst is over – so there’s no real need to be vaccinated.

The fact that the virus hit Black neighborhoods disproportionately during the first wave made many extra wary of getting vaccinated: They feel that they have survived the worst and that the health authorities had failed to help them then.

Many – particularly the younger subjects – also said that their experience as “Black men and women” informs their “distrust”. In other words: why should they worry about getting sick when they could be killed by the police just for walking out the door.

In interviews, Black men and women said that much of their distrust of the coronavirus vaccine was shaped by their own experiences with discrimination or their identity as Black Americans.

“I’m supposed to worry about getting sick when I go outside, versus getting killed by a cop or something like that?” said Jayson Clemons, 41, the construction site safety manager from Queens. After years of trying to be careful not to give the police a reason to stop him — avoiding cars with window tint or rims, and making sure when commuting that his attire clearly marked him as a construction worker — he said he refused to be preoccupied by Covid-19.

One woman believes doctors’ dismissal of her “stomach problems” was rooted in “hyper racism”.

Some Black women described the need they felt to conduct their own research — and ask around — before deciding if the coronavirus vaccine was safe.

“It takes a little bit of hyper-vigilance when you’re a woman of color,” said Jazmine Shavuo-Goodwin, 31, who believes she encountered medical racism when doctors were dismissive of her severe stomach problems. “There’s a lot of homework you have to do, because your doctors may not truly listen to you, to your full complaint, before they’ve already diagnosed you.”

Several of the NYT’s sources claimed the discovery of deadly side effects related to the J&J, AstraZeneca and other vaccines helped inflame the skepticism that many felt.

But in April, the federal government ordered a brief suspension of the Johnson & Johnson vaccine after it was linked to blood clots in the brains of several women.

“It reaffirmed my hesitance, it reaffirmed everything,” Ms. Shavuo-Goodwin, the graduate student and clinic manager, said. “It just shows Black lives don’t matter. You can test that on us just like you tested syphilis on us.”

This fear was echoed in interview after interview, from the Bronx to South Brooklyn, as many Black New Yorkers said the Johnson & Johnson suspension left them more anxious that the vaccines were unsafe, insufficiently tested and steered to Black neighborhoods. That fear has been slow to dissipate, even as much of the rest of the country got vaccinated.

Ultimately, some say they will likely get vaccinated now that the mayor is making it illegal to walk into a restaurant or a gym mask-less without being vaccinated.

But ultimately, many also said they would get vaccinated if forced to do so.

“If it’s going to be mandatory to work, I’ll have no choice,” said Kaleshia Sostre, a 27-year-old from Red Hook, Brooklyn, who teaches parenting classes to young mothers.

In Canarsie, Brooklyn, a 21-year-old college student, Justin Mercado, said Mayor Bill de Blasio’s recent announcement that dining in a restaurant would require proof of vaccination got his attention. He is now likely to get vaccinated.

But it’s not just about work:

“I want to go on a date sometime and enjoy life as much as I can before this strain shuts us back down,” Mr. Mercado said.

For better or worse, many skeptics decided to do their own research before deciding whether to get the jab.

“I’m out of compliance,” said Ms. Shavuo-Goodwin, who is Black and lives in the South Bronx.

“I have done heaps of research looking for things that would make me confident and comfortable getting the vaccine, but honestly I haven’t.”