WTH Did The Corporatocracy Hide From You Last Week? 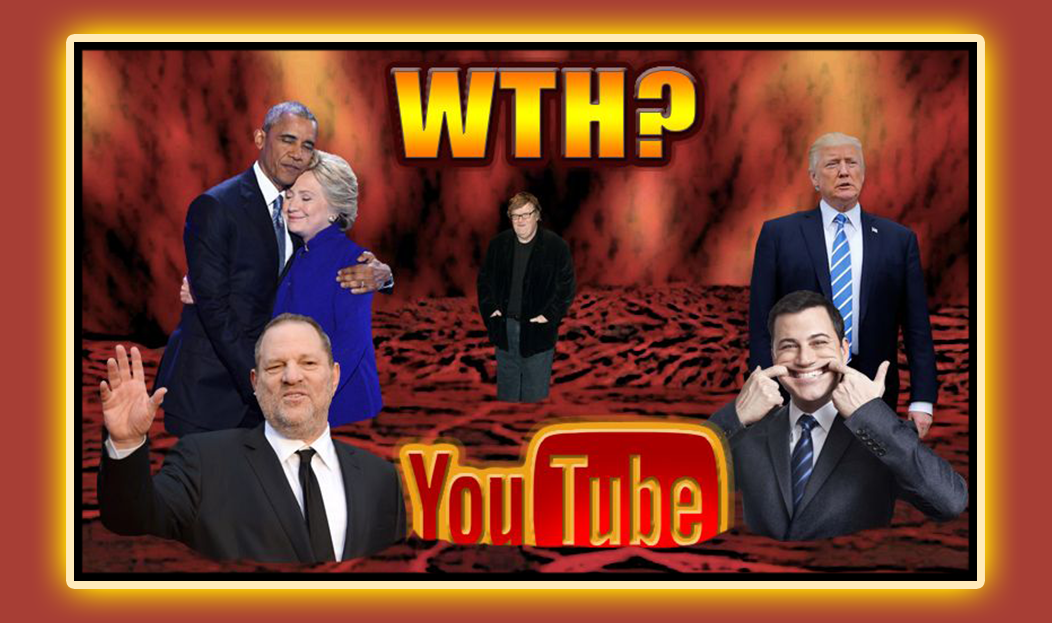 Welcome back beautiful and amazing, spiritually inclined, in the know human beings. Welcome to the WeAreChange Sunday recap, where we give you all the important news that happened this week. News that you should know about but the full truth behind it is probably being denied to you in some way by the US mainstream media corporatocracy.

Today is October 8th, 2017 and in this video, we are going to be talking about how YouTube is destroying the dreams of hard-working, independent people in exchange for more corporatocracy. We discuss a major politically connected media mogul that violates people sexually and more news about the war machine. Sorry, excuse me, I meant US foreign policy in Syria and North Korea. We’re also going to get into the Catalan Independence Day, which is supposed to happen tomorrow.

Two days ago I made a video discussing YouTube’s changes they are doing to their algorithms. Changes that are designed to prevent people from watching videos about supposed conspiracy theories regarding the Las Vegas shooting. That is precisely what is happening as even Philip DeFranco one of the most prominent YouTubers tweeted “Dear YouTube, Your response is bullshit. It’s not true. People are tired of this. Be better.” 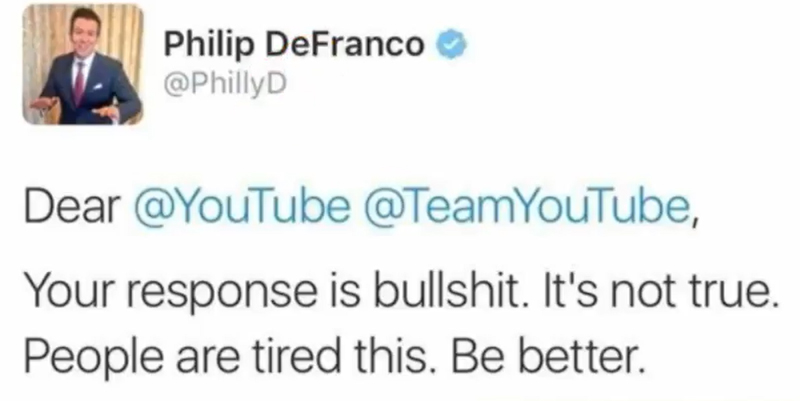 This tweet was in response to another YouTuber who made a video specifically to raise Adsense money for the victims of the shooting. His video was promptly demonetized by YouTube. YouTube responded saying “We love what you’re doing to help, but no matter the intent, our policy is not to run ads on videos about tragedies.” This is an outright lie as Jimmy Kimmel’s ABC conglomerate news organization has videos of him talking about the mass shooting in Las Vegas and it is still monetized. Even popular, toe the line YouTubers who are not part of the corporate conglomerate are being affected. Everyone should understand unless you’re living under a rock that YouTube has now replaced the “You” with the Ministry of Truth. All brought to you by the mega-corporations. They’re going even further with their censorship by removing private playlists that people made. Entirely deleting them when they are a list of lost Vegas shooting videos that question the event. We’ve also been hit by this as the last four videos I did have all been demonetized. I know this sucks it needs to be called out so that will something change. You can expect more finagling of our independent media organization on this platform. This is why we have been moving to Bitchute and DTube. 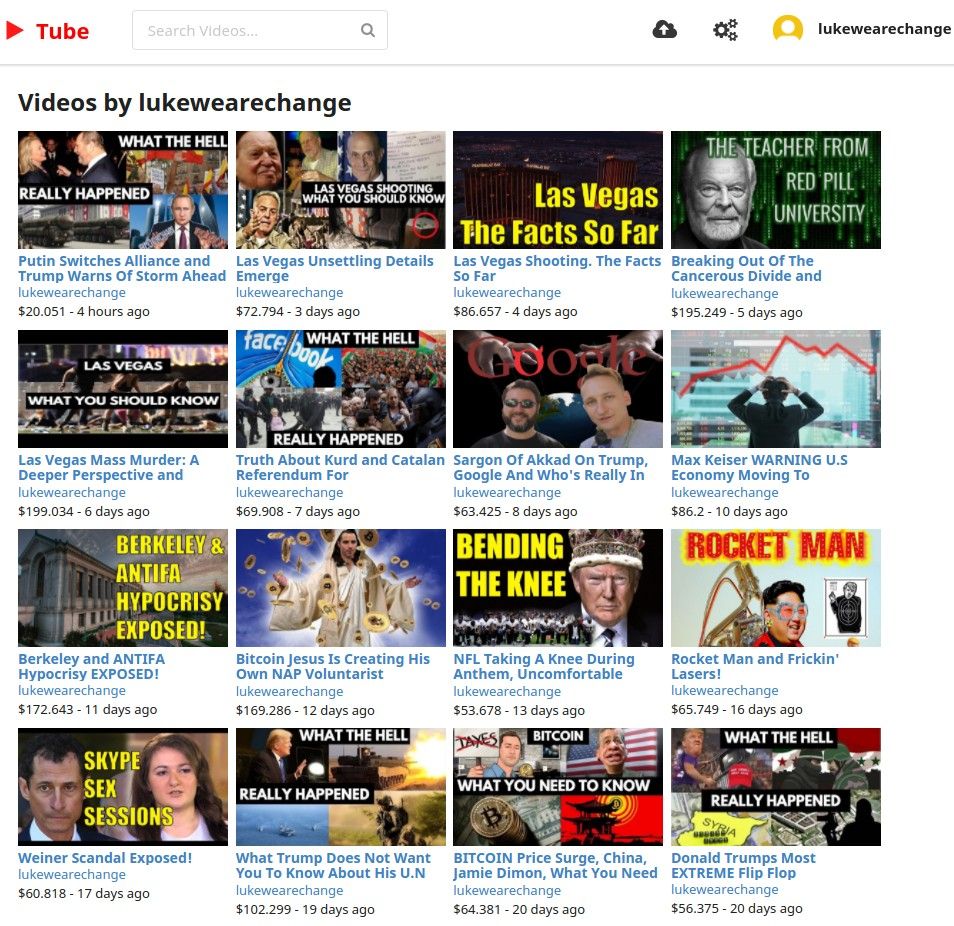 We need to rely on you the viewer through https://wearechange.org/donateto keep us independently running either through PayPal, snail mail, or Bitcoin. Honestly, if it weren’t for random people being generous and deciding to give us five dollars a month this independent media organization would not exist. You guys are more critical than ever as we try to navigate and continue to do our job as best as we can through the minefield of censorship brought on by the mainstream media corporate overlords.

In other mass media big money shocking horrible corporate news, we are learning about Harvey Weinstein. He is a major media mogul who is well politically connected. He is putting the Obamas and Clintons in a tough spot. This week we learned that Harvey who is one of Hollywood’s most prominent producers and executives has sexually harassed abused and controlled women for the past three decades. Due to his vast wealth and power, he was able to keep this a secret for over 30 years with non-disclosure agreements and contracts. He would pay off his victims. All to cover up the horrible things he did. 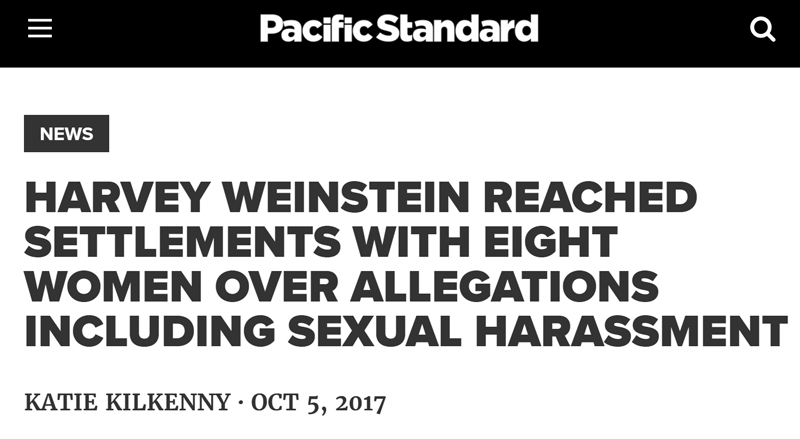 This was a person who not only lived next door to Hillary Clinton, but she used this man, his connections and even his house for private fundraisers. Fundraisers with A-list Hollywood celebrities. This is a man that visited Obama in the White House over 13 times. 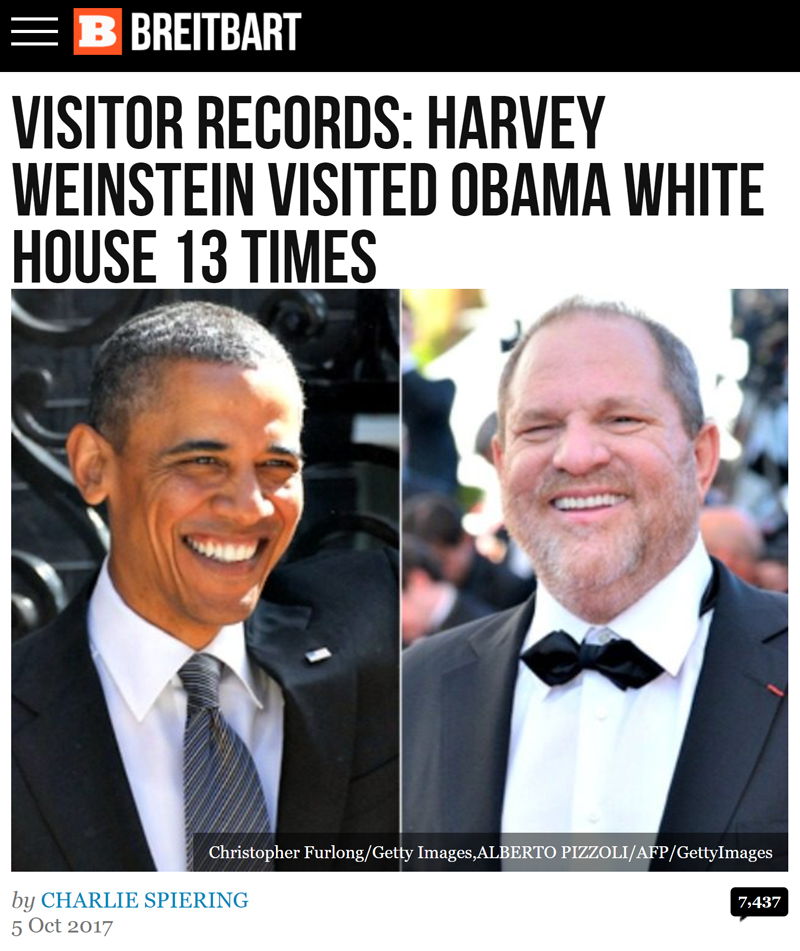 Michelle Obama publicly declared him as a wonderful human being and Obama’s daughter even personally worked for this monster. Mr. Weinstein has hired a very powerful legal team to stop the New York Times from releasing this information to the public. This prompted the New York Times to ask for the release of the NDA’s, the legal binding document that prevents his victims from speaking out against him in a court of law. This man is so powerful we’re not even finding out the full extent of his criminal behavior.

There are however disturbing details coming out like the fact that he once trapped a woman in the hallway of a restaurant that was closed to the public. He masturbated in front of her until he ejaculated. Sadly a lot of the victims are fearful of the power that Weinstein wields in media and have remained silent. This guy is a monster. The case gets even worse as we’re finding out that he wrote up ads to protect other media figures who were sexual predators and also called for their release. He has responded with a letter against these “accusations” in which this man proved he has no semblance of reality by plugging his movie. A movie that he’s going to be making against Donald Trump which was supposed to include Michael Moore. He is trying to shift the blame to the NRA saying that he’s going to give them his full attention. He says he will do his best to make sure that the head of the NRA will “enjoy his retirement party.” He went on to pretend to quote Jay-Z for some reason. 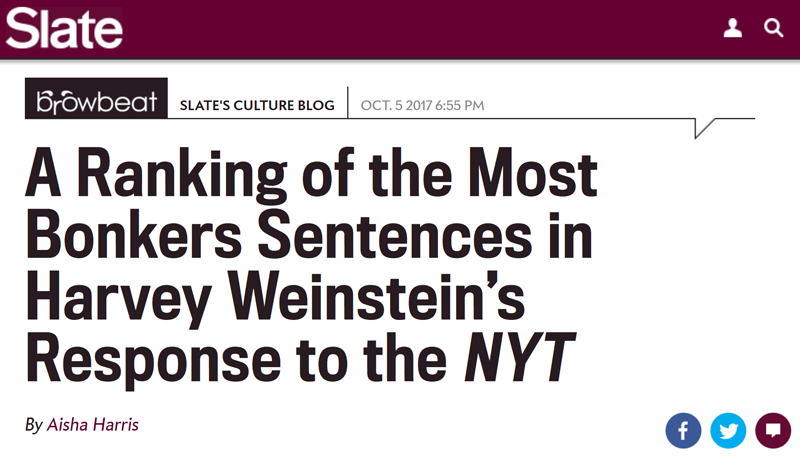 If there’s anything we could learn from this case, it would be understanding just how much these people can do without being arrested. All because of their connections and money. If we had a fair justice system, they would, of course, focus on the elite criminality in our society. The more powerful an individual becomes, the more likelihood there is for abuse.

Moving forward in more abuse of power news; we have US President Donald Trump who days ago along with the top brass of the US military behind him gave us these ominous comments:

Trump: “Maybe it’s the calm before the storm. We have the worlds great military people in this room.”
…
Reporter: “What storm Mr. President?”
Trump: “You’ll find out.”

Donald Trump has been tight-lipped after making those comments. People are speculating it could be in regards to the Iran nuclear deal in which a decision is coming soon. Other people are thinking it’s a hint at war with North Korea. Donald Trump took to his Twitter yesterday and said “Sorry, but only one thing will work!” after talking about the failed diplomatic relations between the U.S. and North Korea.

When asked recently 1746 random Americans were polled and most can’t even find North Korea on the world map. 40% of Americans support the unilateral bombing of North Korea while 36% of Americans can’t find it. I can’t speak for everyone, but I don’t think additional entanglements overseas “will make America great again” or “put America first.” Let me know what you think in the comments.

This weeks news gets worse as we’re just finding out that a fourth US soldier was just killed in Africa, in the country of Niger after another deadly ambush on US troops. Which makes me ask the question, why the hell are US troops fighting in Niger? This is a serious question, “What is the “official” reason that they are in Niger?” If you would like a video about this with more in-depth research, let me know in the comments. In other putting our troops into harm’s way for who knows what news; we found out four days ago that the U.S. is going to be sending more than 3,000 US troops to Afghanistan. Apparently to continue the same mission that was started by George W. Bush 16 years ago which has failed over and over and over again. 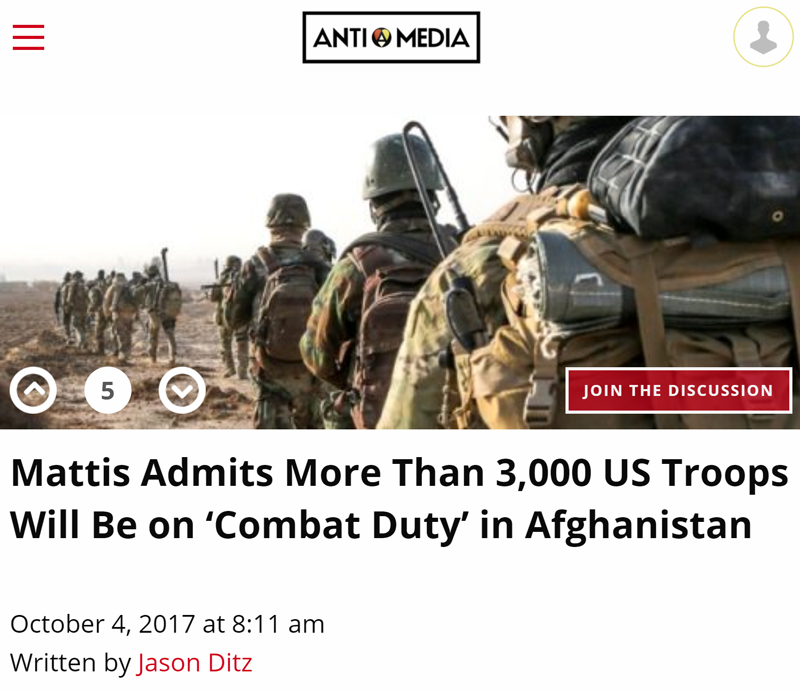 Even though we’ve had a significant military presence in Afghanistan somehow, they have managed to greatly expand the world’s production of opium while indebting this country and causing the loss of service men and women of this country.

I was telling you that more war was coming, that this was going to happen and I got flack for calling it out. Other people choose to believe “other alternative media” sources. They were siding with Trump believing that it’s a drawdown. In reality, it’s not.

This week in spread more democracy and freedom all over the world; the US State Department has just approved a fifteen billion dollar sale of advanced THAAD missile defense systems to Saudi Arabia. 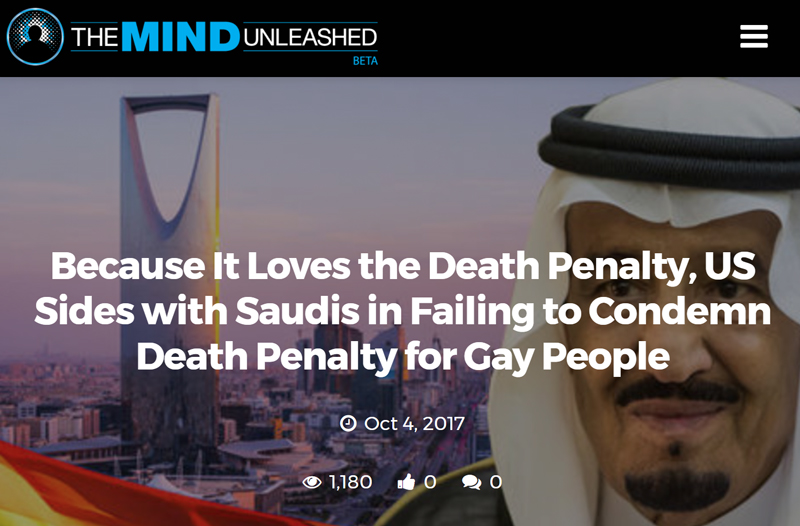 What else do you need to know about U.S. foreign policy other than that we are selling the most advanced military technology to a despotic country? A country that also financed and supported the rise of al-Nusra, ISIS, Al-Qaeda and other radical Islamic terrorist groups all over the world.

We also found out that a majority of ISIS are surrendering in mass right now in Iraq. Over a thousand fighters have turned themselves into the authorities, and they will face repercussions for their horrible actions. That’s just my personal opinion as Russia has been supporting and backing many countries around the world who are making geopolitical, economic moves against the United States. I might be wrong but if I am let me know in the comments section.

In further confusing news around the world, we have an unusual situation developing in Barcelona. After the recent vote took place for independence by the Catalan people there was widespread violence from the Spanish police against voters. People are now asking the question what’s going to happen after they voted for independence. Four days ago Catalan leaders said that after the vote they would declare independence from Spain.

In the wake of the independence vote, the Spanish Constitutional Court ordered the suspension of the Catalan Parliament on Monday. The purpose of this is to prevent the declaration of independence. 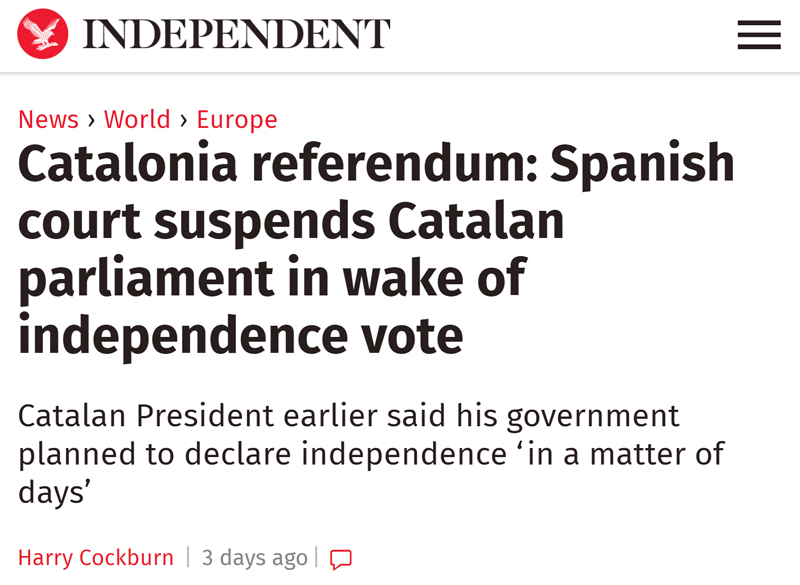 European press agencies are saying that Spanish commandos have been deployed in Catalan and are ready to seize key infrastructure if Catalonia declares independence. As I report this, there are protests inside of Barcelona with people calling for Catalan to stay with Spain with some protest members openly performing the fascist salute. Ultimately the situation is still very muddled and tense. We will be following it closely right here. That is the news for this week. Sorry, I wish I could be more optimistic, but that’s what’s what’s happening around the world. The truth is not always pleasant, but I would prefer to be awake than asleep. If you enjoyed this program, please share it with your friends and family members. Don’t forget to support us on https://wearechange.org/donate. If you don’t, no one else will. Thank you again so much. I love you guys.