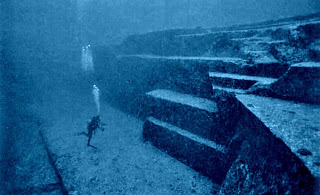 The underwater monument at Yonaguni, Japan is one of the clearest pieces of evidence of an advanced civilization at a time when mainstream archaeology says there was no advanced societies on Earth.

Of all the famous monuments in Japan, perhaps none is more perplexing than Yonaguni, an underwater rock formation that lies off the coast of the Ryuku Islands. It was discovered in 1987 by a group of divers who were there to observe Hammerhead sharks, and it immediately sparked a huge amount of debate in the scientific community: is the monument a natural formation, or is it

man-made?Scientists have long argued that millennia of strong currents and erosion have carved the formations out of the ocean floor, and they point to the fact that the monument is all one piece of solid rock as proof that it was not assembled by a builder. Others, though, point to the many straight edges, square corners and 90-degree angles of the formation as proof that it’s artificial. They often cite one formation in particular, a section of rock that resembles a crude carving of a human face, as evidence. If they are right, then an even more interesting mystery presents itself: the monument had to have been built when it was last above sea-level… over 10,000 years ago!

“With exceptionally clear sub-surface clarity, and a 100 foot visibility a common factor, allowed for thorough photographic documentation, both still photography and video. These images provided the basis of japan’s leading headlines for more than a year. Yet, not a word about the Okinawa discovery reached the US public, until the magazine, “Ancient American” broke the news last spring. Since that scoop, only the CNN network televised a report about Japan’s underwater city. Nothing about it has been mentioned in any of the nation’s other archaeology publications, not even in any of our daily newspapers. One would imagine that such a mind-boggling find would be the most exciting piece of news an archaeologist could possibly hope to learn. Even so, outside of the “Ancient American” and CNN’s single report, the pall of silence covering all the facts about Okinawa’s structures screens them from view more effectively then their location at the bottom of the sea. Why? How can this appalling neglect persist in the face of a discovery of such unparalleled magnitude? At the risk  of accusations of paranoia, one might conclude that a real conspiracy of managed information dominates America’s well-springs of public knowledge.” –  Said Frank Joseph with “Ancient American Magazine”