5 Stories You Missed in 2016 While Everyone Mourned Dead Celebrities 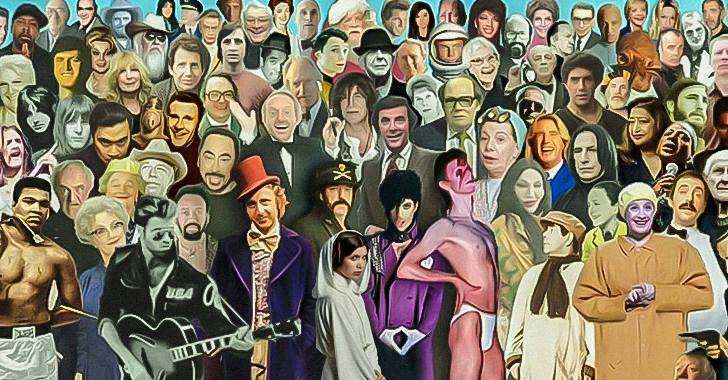 First of all, let me confess that I shed some tears when David Bowie died. I know all 20+ of his albums by heart, and it felt like a piece of my childhood had disappeared.

A few years ago, when Philip Seymour Hoffman died, I also cried. It’s a strange emotional symbiosis that occurs when you mourn for a deceased celebrity, and the point of this article is not to cast aspersions.

However, 2016 has basically become known as the year a bunch of celebrities died, so there’s no better time to assess the phenomenon (and make sure it doesn’t distract us from other issues).

Over Christmas weekend, millions of people mourned the loss of George Michael and Carrie Fisher. They were advocates for gay rights and mental illness, respectively, and the nation reeled from the passing of two beloved iconic figures.

Earlier this year, music legend Prince passed away, devastating tens of millions of fans for whom the musician represented everything from their adolescence in the 1980s to political statements of gender-bending. The list of celebrities who died in 2016 is extensive and, for some, unnerving.

The deaths of celebrities are usually followed by a cathartic release of collective emotion, a shared sense of loss. This kind of ritualistic public funeral pyre has become more heated with the rise of social media. It’s not necessarily unhealthy or shallow.

However, when the topic of celebrity deaths becomes one of the biggest news stories of the year, we reach a dangerous impasse of cognitive dissonance.

The past year’s fascination with celebrity deaths may speak to displaced and deep-seated feelings of loss, helplessness, and anger. Frustrated by our inability to control global affairs — or even the nuances of our own supposed representative democracy — we seem to need to grasp hold of instances of collective loss in the realm of popular culture.

Consumer culture and news media disenfranchisement have done such a comprehensive job of dehumanizing and alienating us from community and selfhood that celebrity deaths are the closest we get to embracing our own mortality and the precariousness of the human race. It’s much easier to post a meme about the death of a pop culture icon than to have a nuanced discussion on climatic genocide or the Syrian refugee crisis.

The point of this article is not to suggest there’s something psychologically wrong with mourning the loss of a beloved celebrity. However, it’s important to remember that when we allow a single person’s death to dominate multiple news cycles, major world events continue to affect thousands — or even millions — of people.

We should be at least equally upset, if not more so, by the following issues that evaded the pop culture radar beam:

This may be one of the most important news stories of the year, and its passage flew completely under the radar. Why? Because the government squeezed it into an NDAA omnibus bill over Christmas weekend. The resulting Countering Disinformation and Propaganda Act is Orwellian to the point that it would be hilarious if it weren’t terrifying. The government simply changed the name ‘The Ministry of Truth’ to Global Engagement Center, which will be an international hub for disseminating “fact-based narratives” and suppressing alternative media. Zerohedge explains:

In non-Newspeak language, the Act will allow the government to exert influence over any media outlet it labels “propaganda.” While it’s impossible this early on to say whether or not this will severely damage the 1st Amendment, given their preoccupation with “fake news,” it’s hard to imagine the government won’t use the legislation for draconian purposes. The law calls for substantial spending to facilitate counter-propaganda in order to ensure the government’s approved “fact-based narratives” (whatever that means) dominate news cycles and overwhelm counter-narratives proffered by alternative media outlets.

This almost ensures that journalists who question the status quo and aren’t beholden to paychecks from multinational corporations will face an uphill battle in covering government corruption and disseminating leaks and reports online.

The United States Has Declared War on the Homeless

Let’s be clear, the war on the homeless began a long time ago when neoliberal trade agreements and bipartisan economic legislation dumped millions of people into the streets without any recourse or path to recovery. They have since doubled down and further criminalized homelessness, embedding spikes under overpasses, removing blankets from people sleeping on the street, breaking down and destroying tents encamped on public property, and even engaging in physical violence against homeless people.

To read more about how our country is punishing the most vulnerable among us, both locally and at the federal level, read more here.

As reported by Anti-Media:

“The staggering figure comes even as the federal government has stepped up its efforts to combat opiate addiction, which have apparently failed to curb the health crisis brought on largely by pharmaceutical companies, the FDA, and overzealous doctors.”

The surge also coincides with efforts by the DEA to crack down on a medicinal plant called kratom, which is used by patients trying to ween themselves off of painkillers. It is also used by people who seek to alleviate physical pain and by people suffering from depression, anxiety, and variety of other mental illnesses.

With the medicinal benefits of marijuana already in the crosshairs of both federal and state government in a decades-long War on Drugs that has incarcerated hundreds of thousands of people — ruining lives and tearing families apart in the process — merely for using and selling an innocuous herb that has countless medicinal benefits, it appears nothing short of fascistic.

Meanwhile, as the government continues to crackdown on healthy alternatives to opioid painkillers, patients continue to overdose and die while Big Pharma lines its pockets.

Amid the multitude of celebrity deaths and other pop culture distractions that are given disproportionate attention, this year also saw more horrifying military strikes by the United States and U.S.-led coalitions in Syria.

Meanwhile, the United States, maneuvering in its proxy war with Russia, continues to dump money and weapons into the hands of rebel groups who seed chaos and sectarian violence. Read more about the confluence of factors causing the historic humanitarian crisis in Syria.

One of the most important stories of the year — possibly of the decade — received virtually no attention from the mainstream media for the duration of its development. The efforts by the government to dismantle a peaceful blockade by the Lakota Sioux — who along with a coalition of other indigenous tribes and activist groups are opposed to the $3.8 billion Dakota Access Pipeline — resulted in terrible injuries.

Our government showed its true colors in siding with the Dakota Access LLC over indigenous people who sought only to protect their ancestral lands. Militarized police converged to expose who our government truly answers to: corporations.

Noticeably missing was the mainstream media.

This article (Top 5 Stories You Missed in 2016 While Everyone Mourned Dead Celebrities) is free and open source. You have permission to republish this article under a Creative Commons license with attribution to Jake Anderson and theAntiMedia.org. Anti-Media Radio airs weeknights at 11pm Eastern/8pm Pacific. If you spot a typo, email edits@theantimedia.org.