Chemtrail or Contrail: 50 Shades of Spray 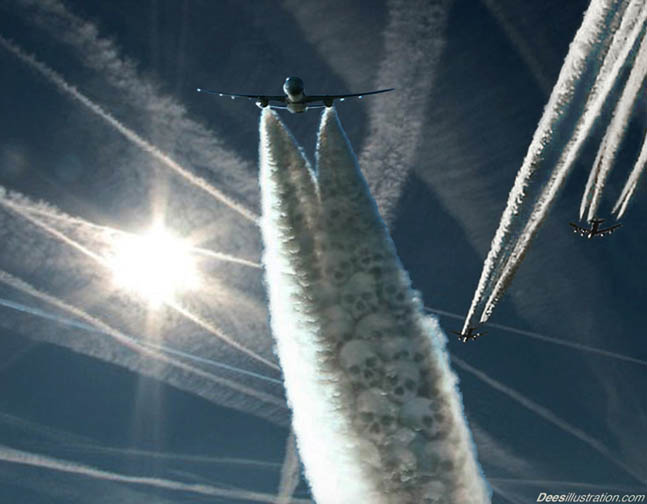 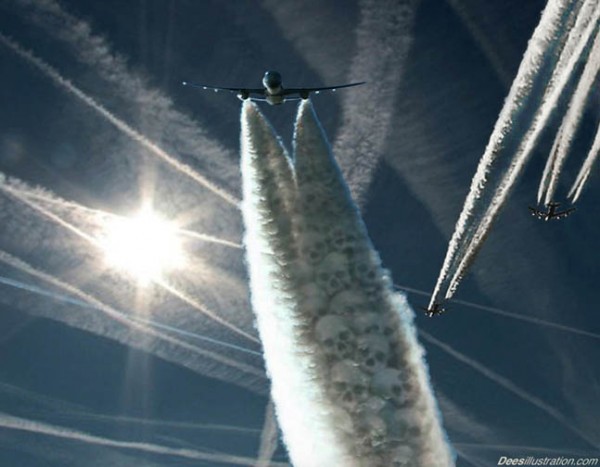 Image by David Dees at ddees.com

The United States, at the height of the Vietnam war, engaged in Operation Popeye using a method called ‘cloud seeding’ to weaponize the weather. Military aircraft dropped silver iodide into the clouds above the Ho Chi Ming Trail, understanding it would extend the seasonal monsoon rains and soften the earth.

The United States military and others from around the world take this topic very seriously. The United States Air Force has a research paper compiled called Weather as a Force Multiplier: Owning the Weather in 2025 where they make their goals quite clear. One goal being, “Any military who would possess the power to own the weather would have a cutting edge over other forces.”

Former Secretary of Defense William Cohen in 1997 stated, “weather weapons,” which can set off earthquakes, hurricanes, and more through electro-magnetic waves already exist, and are a threat to national security.

Hundreds of different research organizations and scientists have proposed that spraying aerosols into the atmosphere via commercial and military aircraft can stave off global warming which is under more fire by skeptics. This aerosol combines a mix of the plane’s jet-fuel, as well as sulfur and heavy aluminum, which would reflect the sun’s rays causing a ‘haze’ or dimming of the atmosphere. Since the 1990’s the atmosphere’s been noted as becoming “dim” or affected by ‘global dimming‘.

President Obama’s science czar, John P. Holdren, is open to using geoengineering aka ‘chem-trails’ as a solution for climate change. The Council on Foreign Relation’s documents for geoengineering projects also mirrors Holdren’s. On February 20th, 2010 climate change scientist David Keith, an advocate for the use of geoengineering was quoted at the American Association for the Advancement of Science meeting in San Diego. His opinion on the subject, Keith stated,

“And by the way, it’s not really a moral hazard it’s more like free riding on our grandkids.”

Aerosol spraying technology is not a new topic, as hundreds of patents just for spraying aerosols via aircraft date all the way back to the year 1917.

It appears that this method of blanketing the Earth with chemicals has been taken beyond the scientific research realm and into practical use. The IPCC found during their tests of aerosols in the atmosphere, it caused negative and undesired affects. National Geographic ran an article on February 8th, 2013 about why, “stratospheric aerosol injection” or SAI, “will not work forever” in terms of reversing global warming.

On October 2nd, 2001 Congressman Dennis Kucinich, of Ohio introduced bill H. R. 2977. The bill outlined a ban on space-based weapons and ‘exotic weapons’. Some examples are: energy weapons, frequency weapons, and also ‘chem-trails’. In 2009 the House of Commons in the UK coordinated a report on geoengineering. Within the report, the main initiative was to ‘regulate’ it. On November 26th, 2013 the Congressional Research Service states in their document Geoengineering: Governance and Technology Policy that,

“One possible governmental response to geoengineering activities is to continue the status quo.”

Many credible people have spoken out against the alleged geoengineering program. Some of these people include: former Premier of British Columbia Bill Vander Zalm, Kristen Meghan former member of USAF who witnessed the program operating from the bases she worked at, former FBI chief Ted Gunderson, and Swedish politician Pernilla Hagberg. Even the German national news reported on the German Airforce when they were spraying the population.

Many of these whistle-blowers claim radioactive isotopes, as well as heavy aluminum and sulfur, are being sprayed on the planet globally. Some say it is for depopulation; some say it is for weather control, others say both. Heavy aluminum and sulfur are known to be nuero-toxins. Could this be an explanation for the skyrocketing cases of nuerodegenerative disease? The United States government states in US Code Title 50, Chapter 32 subsection 1520a that the Secretary of Defense can conduct ‘experiments’ for ‘research’ on the population – under consent.

Whatever your stance is on ‘chem-trails’ or geoengineering, the most important thing is you are well informed on the subject. If you disagree with this information, set it down and walk away. If this troubles you, then take action. Organizing with other like-minds to create events, write your local representative about this issue, or use any lawful and moral vehicle to demonstrate your stance on the subject.