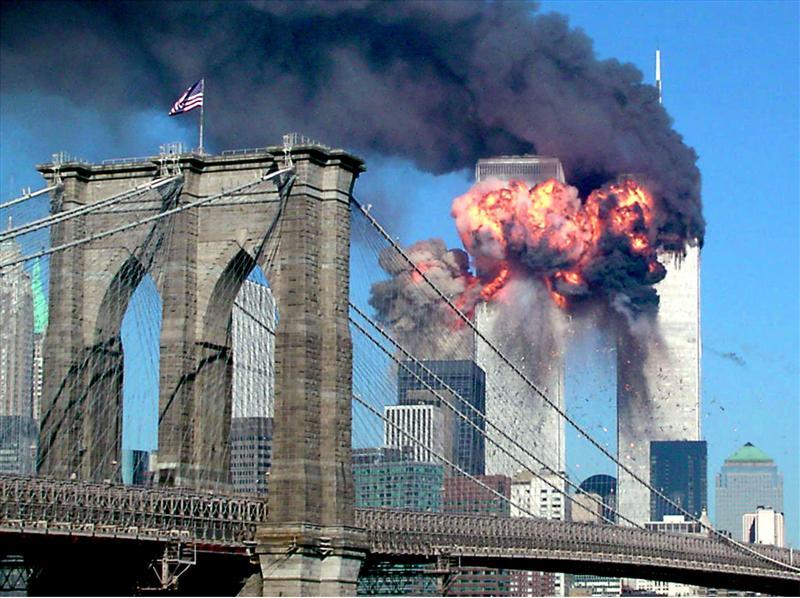 9/11 Mastermind’s Letter to Obama: Here’s Why We Attacked America

When Barack Obama was still in office, Khalid Shaikh Mohammed, one of the perpetrators of the 9/11 terror attacks, penned a letter to him. Though a judge recently ruled that letter could be sent to the White House before the outgoing president left office, the contents were to be withheld from the public until a month later — until after President Trump had assumed power.

This week, the Miami Herald obtained and published the contents of the 18-page letter, originally written in 2015 and titled “LETTER FROM THE CAPTIVE MUJAHID KHALID SHAIKH MOHAMMAD TO THE HEAD OF THE SNAKE, BARACK OBAMA, THE PRESIDENT OF THE UNITED STATES OF AMERICA, THE COUNTRY OF OPPRESSION AND TYRANNY.” It contains the Kuwait-born Pakistani terrorist’s insights into why 9/11 occurred, as well as surprisingly accurate assessments of American politics.

One of the main reasons for 9/11, according to Mohammed, is one terrorists have referenced before: American foreign policy. His explanation is rooted both in history and in current affairs.

“The American people were misled by the Johnson administration and the Pentagon into waging a war in Vietnam that cost 58,000 U.S. lives and millions of Vietnamese lives and ultimately led to a humiliating defeat,” he writes, correctly referencing Johnson’s false flag attack in the Gulf of Tonkin, which the Democratic president used to push the U.S. into a prolonged, messy, and ultimately failed war.

Mohammed also focused on U.S. foreign policy in the Middle East and the Muslim world specifically, providing a long list of reasons why the “U.S. reaped what it sowed on 9/11.” One of those grievances was the U.S. government and CIA’s scheme to back and support  “the Indonesian dictator Suharto when his army-led massacres slaughtered hundreds of thousands of landless farmers,” though his examples span the globe.

He cites America’s notorious desire for oil, referencing when the U.S. built “military bases in the Arabian Peninsula in Tabuk, Dhahran, Bahrain, Kuwait, Oman, and U.A.E – which is prohibited by Sharia laws – to secure a non-stop flood of oil to [their] country at the cheapest price.” He argues this was “to support the dictatorial rule of monarchial families and oppressive, corrupt, dynastic regimes and looting the wealth of the Muslim Ummah population; and to accomplish [U.S.] military objectives there.”

He references the CIA’s 1953 coup in Iran — conducted in conjunction with their British intelligence counterparts — to overthrow the country’s democratically elected leader and empower the “Shah of Iran and Safak, the brutal Iranian intelligence agency, for 40 years.”

Discussing Iraq in the 1990s, he references “when Anglo-Saxon crusaders imposed sanctions against the Iraqi people in a manner of collective punishment that resulted in the death of half a million civilians.” He later addresses former U.N. ambassador Madeleine Albright’s claim that the deaths of half a million children were “worth it.”

Mohammed also points out hypocrisies in American foreign policy, such as the American officials’ ties to Syrian President Bashar al-Assad before they wanted to oust him. He also points out that before invading Iraq, the U.S. “supported Saddam Hussein during the Iran-Iraq War, even when he was using poison mustard gas against the Kurds…”

Mohammed discusses at length the centuries of Western attacks on Muslims and their countries, also noting the way Western countries broke up formerly Ottoman nations in the early 20th century, dividing them up and claiming control in the region.

He circles back to indict the whole of American foreign policy, noting the U.S. has escaped prosecution for their “brutal and savage massacres against the American Indian and [their] crimes in Vietnam, Korea, Tokyo, Hiroshima, Nagasaki, Dresden, and Latin America; and for [their] support for the Chinese Dictator, Chiang Kai-Shek, and Mexico’s dictator, Santa Ana.”

“You can keep your military bases in Japan, Germany, Italy, and elsewhere,” he writes, “but Muslim land will never accept infidels army bases in their land.” He credits Allah with helping them fight back against Western aggression, frequently weaving in religious sentiments as justification for further violence.

Though Mohammed focuses largely on U.S. imperialism, one of his main grievances is the U.S. government’s support for Israel throughout the decades. He argues America reaped what it sowed on 9/11 in part because of America’s backing of Israel “in the political arena, when you blocked resolutions in the United Nations Security Council more than 45 times to protect repeated Israeli crimes.” Mohammed cites the U.S.’ support for Israel’s invasions of Lebanon throughout the years, ultimately arguing that jihadists fight for all oppressed Muslims. He claims they represent Palestinians and others who have been crushed by Western influence and invasion (of course, it is impossible to prove all victimized Muslims support terrorism as recourse, making this claim rather grandiose).

He discusses Obama’s ongoing efforts to continue providing weaponry to Israel even as the former president openly questioned Israeli settlements. “While your children may play safely in the White House backyard, the entire world is watching your weapons kill Palestinian children at play on the Gaza beach during Holy Month of Ramadan or studying in their classrooms.”

Mohammed criticizes American politicians’ repeated claims that Israel “has a right to defend itself.”

“Why can’t you or any American president before you say that the Palestinians have a right to defend themselves against Israeli crimes?” he wonders. “The answer is very clear but you can’t say it because your lords will be very angry.” Indeed, Israel wields significant influence over American policy.

The notion that American politicians are beholden to higher powers is echoed throughout the letter, but not just with regard to Israel’s influence through lobbying organization AIPAC (American Israel Public Affairs Committee). With surprising accuracy, Mohammed details corporate influence throughout government. Early in the letter, he points out that politicians must serve their donors, whether they are in the healthcare industry, the prison industry, or “Blackwater, Halliburton, or any other arms industry of weapons firm.” He says the latter industry requires politicians “to push the DoD and U.S. soldiers into more wars…”

He condemns American capitalism and the farce of democracy throughout the letter, referring to politicians as mercenaries working for their financiers. He asserts that “[i]n the end, this will lead the rich to grow richer and the poor to grow poorer. The country will sink into debt and finally the nation will die.”

Mohammed also singles out Obama, citing his drone strikes, which killed countless innocent civilians and children. He condemns Obama’s assassination of American citizen Anwar al-Awlaki without trial — followed by the killing of his 16-year-old son — as well as the president’s establishment of indefinite detention and his failure to close Guantanamo, where Mohammed has been imprisoned for years.

He calls out Western media, as well. “Don’t let Fox, CNN, BBC, or American and pro-Israeli channels cover your eyes because they never show the truth, their main task is brainwashing,” he argues. “They are experts at lying and distorting the facts to achieve their masters’ ends.”

(Instead, he praises Al-Jazeera, which is, in fact, a news agency originally funded by the oil-rich Qatari government, an ally of the United States.)

Since 9/11, the political establishment’s narrative has asserted Islamic terrorists target the United States because they hate us for our freedom, because their religion is violent, and because they are hellbent on destroying anyone who disagrees with their ideology. While it’s indisputable that anyone who would seek to kill 3,000 civilians is a cold-blooded murderer, his explanation has been echoed by terrorists before; the Charlie Hebdo shooters, the Boston Marathon bombers, and the Orlando night club shooter all referenced violent, imperialistic American policy as reasons for their attacks.

“If your government and public won’t tolerate 9/11, then how can you ask Muslims to tolerate your 60 years of crimes in Palestine, Lebanon, the Arabian Peninsula and the whole Muslim World?”

As former congressman and longtime non-interventionist Dr. Ron Paul warned in 1998 — long before 9/11:

“Far too often, the bombing of declared (or concocted) enemies, whether it’s the North Vietnamese, the Iraqis, the Libyans, the Sudanese, the Albanians, or the Afghans, produces precisely the opposite effect to what is sought. It kills innocent people, creates more hatred toward America, unifies and stimulates the growth of the extremist Islamic movement and makes them more determined than ever to strike back with their weapon of choice – terror.”

This article (9/11 Mastermind’s Letter to Obama: Here’s Why We Attacked America) is free and open source. You have permission to republish this article under aCreative Commons license with attribution to Carey Wedler and theAntiMedia.org.Anti-Media Radio airs weeknights at 11 pm Eastern/8 pm Pacific. If you spot a typo, please email the error and name of the article to edits@theantimedia.org.