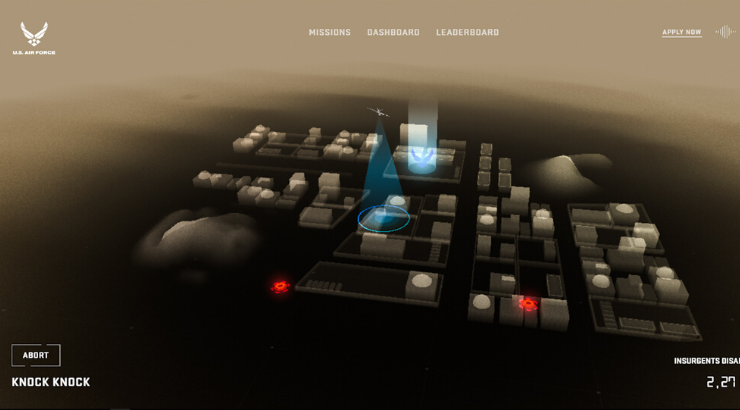 The United States Air Force has a new recruitment tool: a realistic drone operator video game you can play on its website. Called the Airman Challenge, it features 16 missions to complete, interspersed with facts and recruitment information about how to become a drone operator yourself.

In its latest attempts to market active service to young people, players move through missions escorting U.S. vehicles through countries like Iraq and Afghanistan, serving up death from above to all those designated “insurgents” by the game. Players earn medals and achievements for most effectively destroying moving targets. All the while there is a prominent “apply now” button on screen if players would like to enlist and conduct real drone strikes all over the Middle East.

The game has failed to win over David Swanson, director of the anti-war movement World Beyond War, and the author of War is a Lie.

“It is truly disgusting, immoral, and arguably illegal in that it is recruitment or pre-recruitment of underage children to participate in murder. It is part of the normalization of murder that we have been living through,” he told MintPress News.

Tom Secker, a journalist and researcher into the influence of the military on popular culture was similarly unimpressed by the latest U.S.A.F. recruitment strategy, telling us,

The drone game struck me as sick and demented… On the other hand, many drone pilots have described how piloting drones and killing random brown people is a lot like playing a video game, because you’re sat in a bunker in Nevada pushing buttons, detached from the consequences.  So I guess it accurately reflects the miserable, traumatised, serial killing life of a drone pilot, we can’t accuse it of inaccuracy per se.”

Despite the fact that they are rarely, if ever in any physical danger, the military has considerable difficulty recruiting and retaining drone pilots. Nearly a quarter of Air Force staff who can fly the machines leave the service every year. A lack of respect, fatigue and mental anguish are the primary reasons cited. Stephen Lewis, a sensor operator between 2005 and 2010 said what he did “weighs on your conscience. It weighs on your soul. It weighs on your heart,” claiming that the post traumatic stress disorder he suffers from as a consequence of killing so many people has made it impossible for him to have relationships with other humans.

“People think it is a video game. But in a video game you have checkpoints, you have restart points. When you fire that missile there’s no restart,” he said. “The less they can get you to think of what you’re shooting at as human the easier it becomes to you to just follow through with these shots when they come down,” said Michael Haas, another former U.S.A.F. sensor operator. The Airman Challenge game follows this path, using red dots on the screen to represent enemies, sanitizing the violence recruits will be meting out. 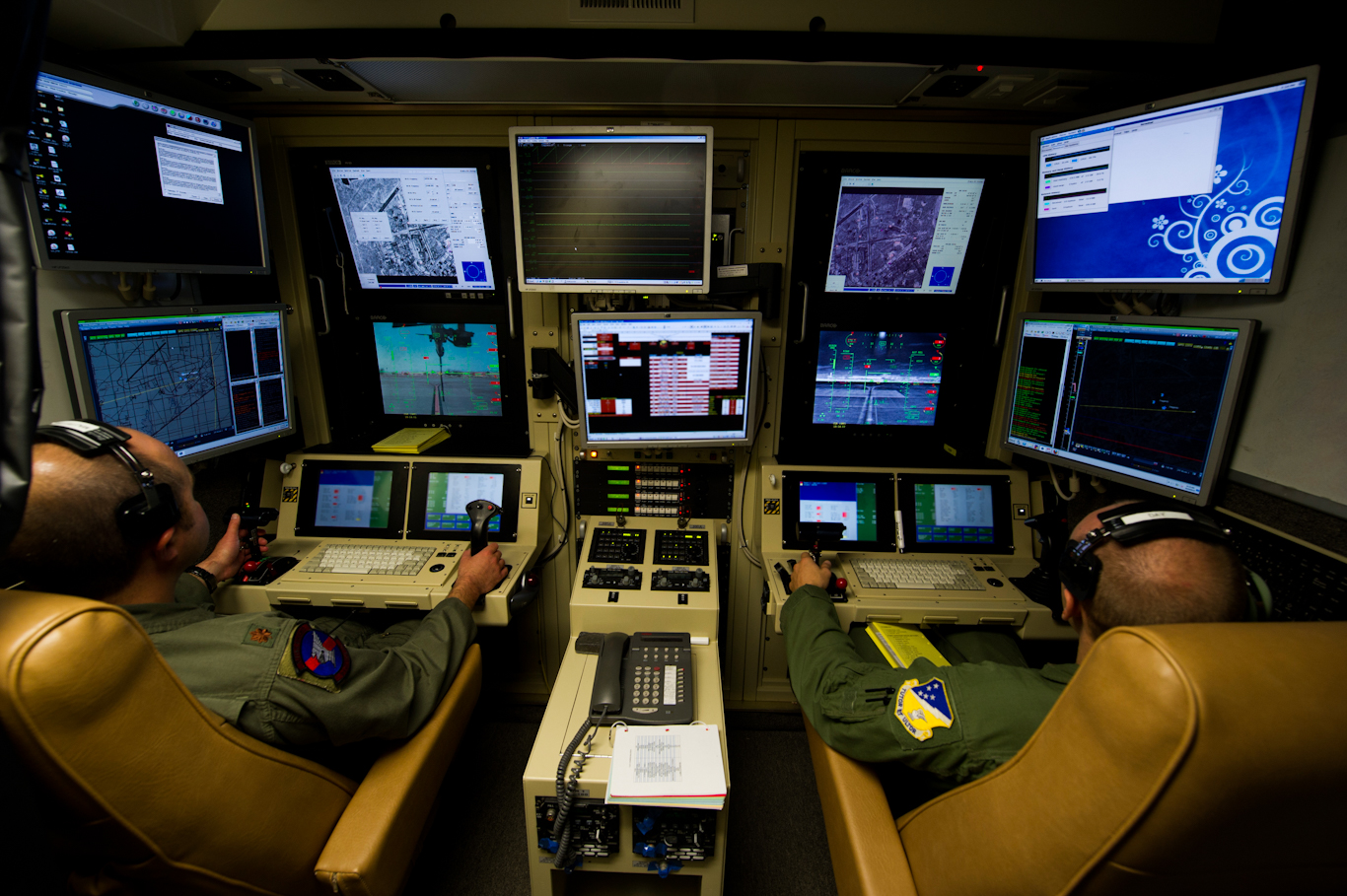 “We were very callous about any real collateral damage. Whenever that possibility came up most of the time it was a guilt by association or sometimes we didn’t even consider other people that were on screen,” Haas said, noting that he and his peers used terms like “fun sized terrorist” to describe children, employing euphemisms like “cutting the grass before it grows too long,” as justifications for their extermination. The constant violence, even from afar, takes a heavy toll on many drone operators, who complain of constant nightmares and having to drink themselves into a stupor every night to avoid them.

Others, with different personalities, revel in the bloodshed. Prince Harry, for example, was a helicopter gunner in Afghanistan and described firing missiles as a “joy.” “I’m one of those people who loves playing PlayStation and Xbox, so with my thumbs I like to think I’m probably quite useful,” he said. “If there’s people trying to do bad stuff to our guys, then we’ll take them out of the game.”

Drone bombing is a relatively new technology. Barack Obama came into office promising to end President Bush’s reckless aggression, even being awarded the Nobel Peace Prize in 2009. While he slashed the number of American troops on the ground in Iraq and Afghanistan, he also greatly expanded U.S. wars in the form of drone bombings, ordering ten times as many as Bush. In his last year in office, the U.S. dropped at least 26,000 bombs – around one every twenty minutes on average. When he left office, the U.S. was bombing seven countries simultaneously: Afghanistan, Iraq, Syria, Libya, Yemen, Somalia and Pakistan.

Up to 90 percent of reported drone casualties were “collateral damage,” i.e. innocent bystanders. Swanson is deeply concerned about the way in which the practice has become normalized: “If murder is acceptable as long as a military does it, anything else is acceptable,” he says, “We will reverse this trend, or we will perish.”

History did not exactly repeat itself with the election of Donald Trump in 2016, but it did rhyme. Trump came to power having made multiple statements perceived as anti-war, strongly criticizing Obama and the Democrats’ handling of the situation in the Middle East. Egged on even by so-called “resistance” media, Trump immediately expanded drone bombings, increasing the number of strikes by 432 percent in his first year in office. The president also used a drone attack to kill Iranian general and statesman Qassem Soleimani earlier this month.

Killing in the Game of

In 2018, the armed forces fell well short of their recruitment targets, despite offering a package of benefits very attractive to working-class Americans. As a result, it totally revamped its recruitment strategy, moving away from television and investing in micro-targeted online ads in an attempt to reach young people, particularly men below the age of thirty, who make up the bulk of the armed forces. One branding exercise was to create an Army e-sports team entering video game competitions under the military brand. As the gaming website, Kotaku wrote, “Positioning the Army as a game-friendly environment and institution is crucial, or even necessary, to reach the people the Army wants to reach.” The Army surpassed its recruitment goal for 2019.

Although the Airman Challenge game is a new attempt at recruitment, the armed forces have a long history being involved in the video game market, and the entertainment industry more generally. Secker’s work has uncovered the depths of collaboration between the military and the entertainment industry. Through Freedom of Information requests, he was able to find that the Department of Defense reviews, edits and writes hundreds of TV and movie scripts every year, subsidizing the entertainment world with free content and equipment in exchange for positive portrayals. “At this point, it’s difficult to effectively summarise the US military’s influence on the industry, because it’s so varied and all-encompassing,” he said.

“The US Army spends tens of millions a year on the Institute for Creative Technologies, who develop advanced tech for the film and gaming industries, as well as in-house training games for the Army and – on occasion – the CIA. The Department Of Defense has supported a number of major game franchises (Call of Duty, Tom Clancy games, usually first or third-person shooters). Military-supported games are subject to the same rules of narrative and character as movies and TV, so they can be rejected or modified if they contain elements the Department Of Defense deems controversial.”

The video games industry is massive, with hyper-realistic first person shooters like Call of Duty being among the most popular genres. Call of Duty: WWII, for example, sold $500 million worth of copies in its opening weekend alone, more money generated than blockbuster movies “Thor: Ragnarok” and “Wonder Woman” combined. Many people spend hours a day playing. Captain Brian Stanley, a military recruiter in California said, “Kids know more about the army than we do… Between the weapons, vehicles, and tactics, and a lot of that knowledge comes from video games.”

Young people, therefore, spend huge amounts of time effectively being propagandized by the military. In Call of Duty Ghosts, for instance, you play as a U.S. soldier fighting against a red-beret wearing anti-American Venezuelan dictator, clearly based on President Hugo Chavez, while in Call of Duty 4, you follow the U.S. Army in Iraq, shooting hundreds of Arabs as you go. There’s even a mission where you operate a drone, which is distinctly similar to the Airman Challenge. U.S. forces even control drones with Xbox controllers, blurring the lines between war games and war games even further.

Although the military industrial complex is keen to advertise opportunities for pilots, they go to great lengths to hide the reality of what happens to the victims of airstrikes. The most famous of these is likely the “Collateral Murder” video, leaked by Chelsea Manning to Wikileaks co-founder Julian Assange. The video, which made worldwide news, laid bare the callousness towards civilian lives Haas described, where Air Force pilots laugh at shooting dead at least 12 unarmed civilians, including two Reuters journalists. While those commanders ultimately in charge of military operations in the Middle East appear on television constantly, trying to sanitize their actions, Manning and Assange remain in prison for helping to expose the public to an alternative depiction of violence. Manning has spent the majority of the last decade incarcerated, while Assange awaits possible extradition to the United States in a London prison.

The Airman Challenge video game, for Secker, is merely “the latest in a long line of insidious and disturbing recruitment efforts by the US military.” “If they feel they have to do this just to recruit a few hundred thousand people to their cause, maybe their cause isn’t worth it,” he said.