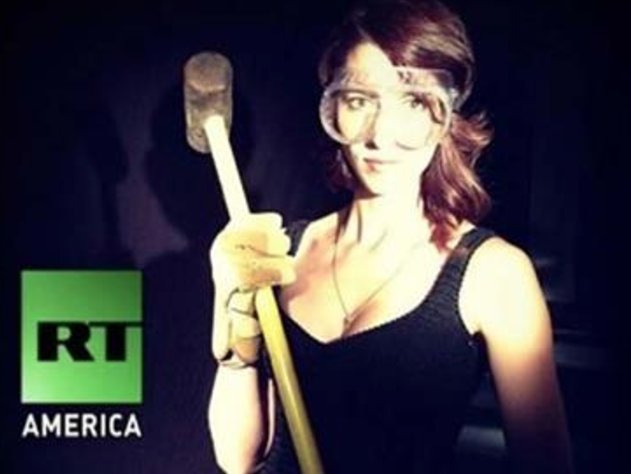 After she was named as a reason Hillary Clinton lost the election, the Free Thought Project interviewed Abby Martin to set the record straight.

Jay Syrmopoulos, of The Free Thought Project, interviewed investigative reporter Abby Martin, the former host of the RT show Breaking the Set, which was featured in the fatally flawed DNI report on Russian interference in the U.S. presidential election, and asked her a few questions about the widely panned intelligence report, fake news and more.

The “Declassified Intelligence Community Assessment of Russian Activities and Intentions in Recent US Elections” report, which amounted to nothing more than a speculative assessment, contained no actual evidence of Russian hacking, and was a clear attempt at propping up a dubious political agenda.

The report provided no conclusive evidence to support the oft-made claims of “Russia hacking the election,” and instead devoted a large section of the report to speculative claims about Russian motives and criticism of the Russian television station RT.

In particular, the report explicitly blamed the RT program, Breaking the Set, for undermining Americans’ confidence in US electoral processes. One major problem: the program wasn’t even on the air during the current presidential election cycle.

TFTP: With the publication of the anti-Trump dossier that was clearly unverified propaganda meant to intentionally undermine Trump, but published by Buzzfeed anyway, making it into the intelligence report on Russian election interference — on top of the already fallacious narrative about Breaking the Set influencing the election, despite not being on the air at that time — do you feel that that US intelligence community as a whole is politicized beyond the point of operating as fully functional intelligence agencies that provide non-politicized, untainted, intelligence to President Trump or are we off into uncharted territory in terms of the intel apparatus attempting to largely dictate public policy with highly politicized intelligence to the administration? Any other thoughts about the extremely speculative DNI report into “Russian election interference?”

Abby Martin: The Buzzfeed dossier was one of the most outrageous things printed during this entire election season. You’d better have substantial evidence in order to print a claim as crazy as Trump is compromised because Russia has Golden Shower sex tapes of him. Buzzfeed knew the report was likely fake, and published it anyway, telling people to ‘make up’ their own mind. This is a reprehensible way to conduct journalism, and Buzzfeed is no better than the ‘fake news’ it denounces.

The long awaited DNI report allegedly proving Russia’s role in US elections is audaciously baseless. Almost half of it was dedicated to bashing RT and the network’s coverage of valid issues like Wall Street and fracking. Half of the US population is living paycheck to paycheck, and there is mass suffering across the country. Simply covering inequality, protests and exploiting the devastating hypocrisy on behalf of the US Empire when it comes to human rights does not ‘undermine democracy’––in fact, it strengthens it. In order to have any sort of functioning self-governance, a citizenry needs to have unfettered access to a variety of opinions and information that impacts them.

The scariest part about the report is that it was essentially calling coverage of activist issues, environmentalism and third parties a danger to the US. It also singled out my former RT show Breaking the Set, which has been off the air for two years, as some sort of Kremlin entry point to subvert the US government by fomenting “radical discontent.”

In any reasonable world, with a true and honest fourth estate, such a report would be laughed out of the room. Unfortunately, many in the corporate press have vehemently defended the report, desperate to latch on to vestige of power that they will invariably lose now that the Clinton dynasty is crushed. It’s embarrassing that partisan journalists and Hillary lackeys all of the sudden are defending the same apparatus that got us into Vietnam, Iraq and other deadly wars on purposefully false intelligence.

I don’t think we’ve seen this much internal conflict inside the intelligence community since the the 1960s, where there was a series of high profile political assassinations and aggressive covert operations being carried out at home and abroad. The existing power structure has lined up against Trump, because of his unpredictability to puppet their agenda, and could go to some extreme lengths to correct and reassert itself.

Russia was just declared as the number one “national security threat” to America by politicians vying to escalate their new Cold War and desperate to de-legitimize Trump’s presidency, putting US-Russia relations at potentially its most dangerous moment. People must fight against this belligerent push for war.

TFTP: There is a large entrenched corporate oligarchy that has deep roots within the U.S. governmental bureaucracy, which is largely being brought to bear against Trump, a perceived outsider to the levers of powers, mainly as a means of delegitimizing his presidency and usurping his stated intention of rapprochement with Russia — what, or whom, do you see as the main drivers and interest groups coalescing behind this soft coup of sorts?

Abby Martin: The US is undoubtedly an oligarchy, to which Trump is no outsider. The cabinet he’s putting together is one of the richest gaggle of billionaires in history to be ruling over us peons––from mercenary Erik Prince’s sister Betsy DeVos, to Exxon Mobil’s CEO Rex Tillerson. There are just differing factions within the capitalist class, from neocons to neoliberals, that see Trump as a derailment to their plans and ‘common interests’ in Syria, Russia and beyond.

I think the establishment is mainly concerned about Trump because they know he will be a magnet for mass protests at home, and could bring the country to the brink of revolt like it was near the end of the Bush administration, before Obama’s hypnotic platitudes put everyone back to sleep.

It would be a mistake to assume Trump is going to defy a ruling class he is ultimately a part of when it comes to the Empire’s global chessboard. Already, he has stacked his cabinet with tons of anti-Muslim war-mongers who are itching to fuck with Iran, one of the world’s greatest tinderboxes. Trump’s ego could lead him anywhere in the world he feels would make him more popular among his base.

TFTP: There was a clear trickled down agenda enacted after a major post-election meeting of progressive elites with the Democratic Alliance, co-founded by Soros in 2005, with Media Matters then issuing a press release, and like clockwork numerous publications such as the Washington Post began running articles about “fake news.” Subsequently, President Obama even publicly claimed “fake news” a threat to our democracy during a speech in Berlin. In turn, Mark Zuckerberg announced a fact-checking regime, laughably using Politifact, Snopes and ABC news to fact-check and flag disputed stories — which would then result in disputed stories being given a lower algorithm ranking, thus not as often appearing in people’s newsfeeds. In essence, this is a way for the corporate oligarchy to attempt to regain control of the public informational narrative.

The corporate mainstream narrative of “fake news” had a creeping, but clear, drive to delegitimize alternative media outlets, such as us here at The Free Though Project, likely due to our reporting on U.S. hegemony/imperialism and topics like the contents of WikiLeaks’ releases of the DNC and Podesta emails during the election – while the mainstream media largely refused to do so.

Do you perceive the aforementioned events as separate and distinct from one another, or do you see a larger agenda being set into motion by a collusion of the power-elite regarding these attempts at regaining control over the informational gates of society?

Abby Martin: Those who hitched their wagons to Hillary want to blame the loss on everything and everyone but themselves. So of course “fake news” is a perfect target. But the attack on so-called “fake news” is really nothing more than an attack on non-corporate media. The neo-McCarthyist list propagated by Washington Post and elsewhere conflated several hard hitting legitimate news sites with random blogs to try to discredit alternative media as illegitimate.

It’s ridiculous to see the same media outlets that have been pushing disastrous economic and political policies for decades suddenly outraged about “fake news.” I don’t think anyone is buying it, either. The extreme distrust in corporate media outlets being at an all time low is why Trump did so well––their clear agenda against him just made people trust him more. Unfortunately, Trump as president means
Brietbart and Infowars are now de facto state media, publications that promote false narratives demonizing Muslims, immigrants and leftists instead of the power elite.

TFTP: Also, I was curious if there was a heavy Russian state influence on reporting at RT in terms of how much censorship or suppression was there, and how much leeway journalists were provided in how they reported on events relating to Russia vs other global events?

Abby Martin: I worked for RT for three years, and although it was obvious who the network’s financier was, I was still able to pave a level of editorial freedom essentially unheard of at any other major media outlet. I was able to denounce Putin, as well as my own network’s coverage, and still maintain the prime time show for the next year. Despite the disagreements I had with management, I was never deterred from speaking my opinions on my show, and if I ever was I would have immediately quit. My personal experience at RT totally undermines the mainstream narrative that RT is nothing more than a Kremlin mouthpiece.

This article (Activist Abby Martin Exposes Fake News And The Oligarchy Behind It) by Jay Syrmopoulos is free and open source. You have permission to republish this article under a Creative Commons license with attribution to the author and The Free Thought Project.