Afghan Poppy Cultivation at ‘All-Time High’ Despite $7.6 Billion Spent by US to Combat Growth of the Plant 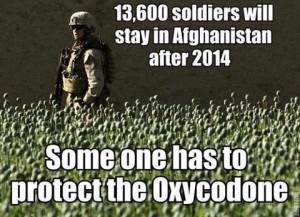 Cultivation of the illegal poppy plant in Afghanistan has reached an “all time high” following a $7.6 billion counternarcotics campaign paid for by the United States, according to government oversight investigators.

Despite the spending to combat growth of the poppy plant, which is used to make drugs such as opium and heroin, cultivation has reached an “all time high,” especially in places once declared “poppy free,” according to new report by the Special Inspector General for Afghanistan Reconstruction (SIGAR).

“After a decade of reconstruction and over $7 billion in counternarcotics efforts, poppy cultivation levels are at an all-time high,” SIGAR concluded in its report released Wednesday.

The findings have caused concern about the effectiveness of the United States’ efforts to stymie poppy production, SIGAR concluded.

Levels of poppy farming have not been this high since 2007, according to SIGAR.

And “with deteriorating security in many parts of rural Afghanistan and low levels of eradication of poppy fields, further increases in cultivation are likely in 2014,” SIGAR informed the Defense and Justice Departments in a recent alert.

Afghanistan has experienced a 50 percent increase in poppy-related proceeds from 2012 to 2013 as a result of the farming boon, according to the report.

“Despite the significant financial expenditure, opium poppy cultivation has far exceeded previous records,” according to SIGAR.

The boost in production of the popular drug is primarily the result of new deep-well technology that has allowed the Afghans to turn large portions of the once inhabitable desert into fertile land.

“Due to relatively high opium prices and the rise of an inexpensive, skilled, and mobile labor force, much of this newly-arable land is dedicated to opium cultivation,” the report states. “Poppy-growing provinces that were once declared ‘poppy free’ have seen a resurgence in cultivation.”

Areas once “considered a model for successful counterinsurgency and counternarcotics efforts” have seen poppy production grow fourfold between 2012 and 2013, according to SIGAR.

Profits garnered from the production of opium and other poppy-derived drugs have increased from $2 billion in 2012 to $3 billion in 2013, the report found.

Questions are now being raised about the effectiveness of the United States’ counternarcotics strategy in Afghanistan.

“In past years, surges in opium poppy cultivation have been met by a coordinated response from the U.S. government and coalition partners, which has led to a temporary decline in levels of opium production,” according to SIGAR. “However, the recent record-high level of poppy cultivation calls into question the long-term effectiveness and sustainability of those prior efforts.”

The U.S. Embassy in Kabul admitted defeat in the drug arena when approached by the watchdog for comment on its report.

The U.S. Embassy in Kabul, speaking on behalf of the State Department and USAID, “acknowledged the significance of the poppy cultivation issue in Afghanistan,” according to SIGAR.

It “also acknowledged that, after more than a decade of taxpayer-funded counternarcotics programs in Afghanistan, U.S. government efforts to build Afghan government counternarcotics capability were still ‘in progress,’” according to their comments recounted in SIGAR’s report.

However, the embassy also maintained that some of its counternarcotics efforts “are yielding results.”

“There is no silver bullet to eliminate drug cultivation or production in Afghanistan or to address the epidemic of substance abuse disorder that plagues too many Afghans,” the embassy wrote in a statement to SIGAR.

As the drug problem grows worse, SIGAR is recommending that the DoD and other agencies reassess their game plan.

“I strongly suggest that your departments consider the trends in opium cultivation and the effectiveness of past counternarcotics efforts when planning future initiatives,” SIGAR wrote.