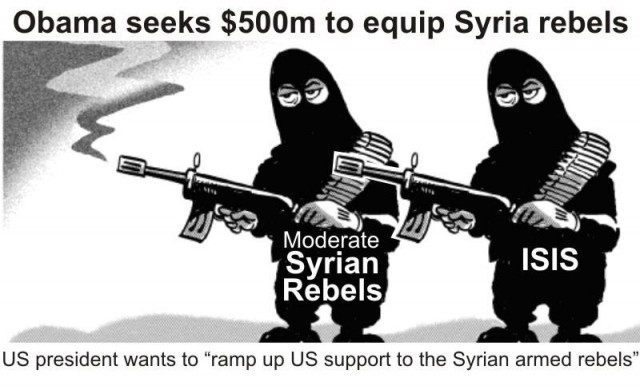 Like the patently false “the surge worked!” meme that came before it, the idea that President Obama erred in resisting calls to arm the Syrian rebels is fast-becoming a crucial pillar of D.C. conventional wisdom. And just like the way the pro-surge argument ignores the policy’s stated goals — to pacify Iraq and give its sectarian leaders a chance to forge a lasting political peace — so, too, does the knock on Obama for not arming the rebels ignore the fact that throwing American guns into the abyss of the Syrian civil war would’ve done little to alter its outcome.

According to the New York Times, via this fascinating and potentially historic Wednesday report which cites talks with “current and former American government officials,” there is a CIA report looking at the past 45 years of U.S. attempts to use covert arms to influence foreign fighters. And if you’re someone who’s gung-ho about secretly sending American weapons abroad, the agency’s conclusions are not pretty. “The still-classified review … concluded that many past attempts by the agency to arm foreign forces covertly had a minimal impact on the long-term outcome of a conflict,” the Times reports. When it was done without the guidance of U.S. forces on the ground, as was and is the case in Syria, the outcome was even worse.

Ironically, the one instance the CIA found where sending covert arms had a measure impact is the very same one many opponents of arming the Syrian rebels pointed to — the war in Afghanistan between the mujahideen and the Soviet Union. And even this example, according to the agency, is less than meets the eye. For one, the mujahideen succeeded without U.S. guidance due in large part to Pakistani intelligence agents filling the gap. For another, some of the fighters the CIA armed in the ’80s would end up devoting their new skills and experience to another militant group. It calls itself al Qaeda.

Considering the CIA report is still technically a secret and the Times report is less than a week old, it wouldn’t be right to use this news as a cudgel to bash those activists and pundits who see the rise of ISIS as vindication. They were and are still wrong, of course; but they had no more evidence to go off of than you or me or most anyone else. But when it comes to former Obama administration officials — like former CIA chief and Defense Secretary Leon Panetta, or former Secretary of State Hillary Clinton — the story is very different. These folks were on the inside when President Obama commissioned and received the report; they may well have been in the Situation Room, where, according to the Times, the findings were first presented.

Yet in spite of evidence to the contrary from the CIA itself, Panetta, Clinton and god only knows how many anonymous defense sources have insisted on criticizing Obama for being reluctant to do something he had good reason to believe wouldn’t work. That would be bad enough; but if we remember that the president ultimately buckled and signed-off on arming the rebels anyway (in 2013 and this year, too) the chutzpah of his former teammates is galling. I expect neoconservatives and unreconstructed Bush supporters to reject the reality-based community when its conclusions don’t turn out how they’d like. What’s far more irksome — and much more enervating — is when supposedly sober and clear-minded Democratic leaders do it for them.