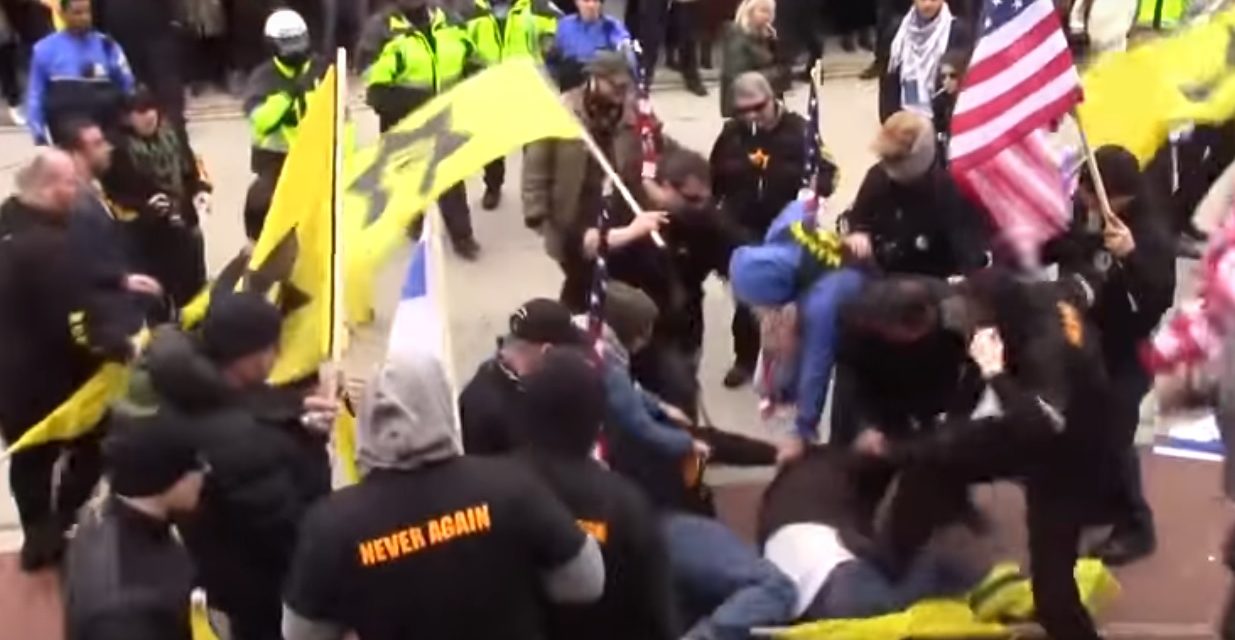 Two alleged members of the extremist Jewish Defense League have been charged with attacking protesters at last weekend’s AIPAC conference in Washington, D.C.

The attacks mark the group’s most violent public incident in years.

Two alleged members of the Jewish Defense League face charges of assault and hate crimes after a vicious attack on a Palestinian-American man attending a protest against the policy conference of the American Israel Public Affairs Committee, or AIPAC, last Sunday.

“I saw this white pole coming straight towards my eye,” Nayfeh said in this report from Mondoweiss. “I fell down on the ground and I felt people hitting me and kicking me. And then the police got me [out]. It was all so fast.”

Nayfeh told Mondoweiss he had not planned to participate in the protest and that he was there to say goodbye to his daughter Danya, a Georgetown law student who wanted to attend the protest.

Both men are allegedly members of the JDL, a far-right Zionist group founded by New York’s Rabbi Meir Kahane in 1968. Kahane later moved to Israel and founded the Kach party, an extremist movement that was ultimately banned for its racist ideology, as well as listed as a terrorist group, by the Israeli government.

While small numbers of counter-protesters occasionally gather with JDL flags near Palestinian demonstrations, the organization’s activities have declined significantly since the 2001 arrest of its chairman and Kahane’s replacement, Irv Rubin, on federal bomb and conspiracy charges.

In previous decades, the JDL was implicated in dozens of explosions and other domestic attacks, including the 1985 murder of Alex Odeh, a regional director of the American-Arab Anti-Discrimination Committee, in a mail bombing of his Santa Ana, California office.

Its resurgence, and alleged attacks on Nayfeh and others in Washington, D.C., have led some to worry that there will be a return of the violent extremism that marked past decades of U.S. Zionism. 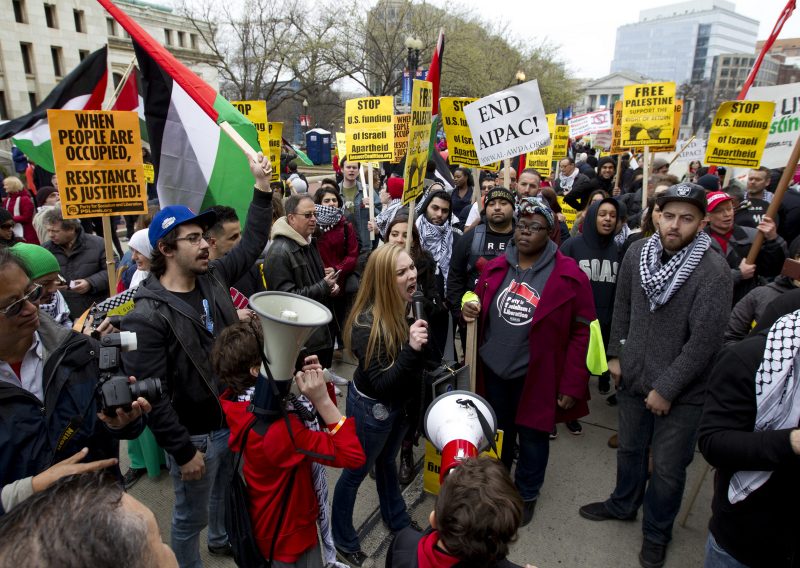 While the violence attributed to its members may have seized headlines, the JDL’s presence in support of AIPAC was dwarfed by others gathered to oppose the pro-Israel group.

AIPAC, the flagship organization of the Zionist movement in the U.S., is widely considered one of the most powerful lobbies in Washington, D.C., with its annual policy conferences regularly drawing elected officials and political candidates from across the political spectrum.

In recent years, some have questioned the extent of the group’s influence on U.S. foreign policy, especially after the defeats of its drives for airstrikes against the Syrian government in 2013 and against an international nuclear agreement with Iran in 2015.

As politicians, conference attendees and Israeli delegates schmoozed inside the Walter E. Washington Convention Center, multiple groups of protesters gathered outside it.

A largely Palestinian group, mobilized by the Cleveland and Midwest chapters of Al-Awda: The Palestine Right to Return Coalition and the ANSWER Coalition, rallied outside the White House before marching toward the center. A large group of young Jewish people, part of the IfNotNot campaign, protested outside the center’s entrance, with some of them chaining themselves together to block its doors.

In a statement given after the demonstration, IfNotKnow said protester Ben Doernberg was also attacked by a JDL member with a flagpole, resulting in a concussion.

“Numerous other protesters were attacked, verbally harassed and physically intimidated during the protest,” the group said.

But despite the JDL’s alleged violence, protesters said they believe their message of opposition to AIPAC and U.S. support for Israel won the day.

“The diversity is clear and people of all walks of life came to support a Palestinian march and rally to end AIPAC,” Abbas Hamideh of Al-Awda, whose marchers later merged with the IfNotNow protesters outside the convention center, told MintPress News. 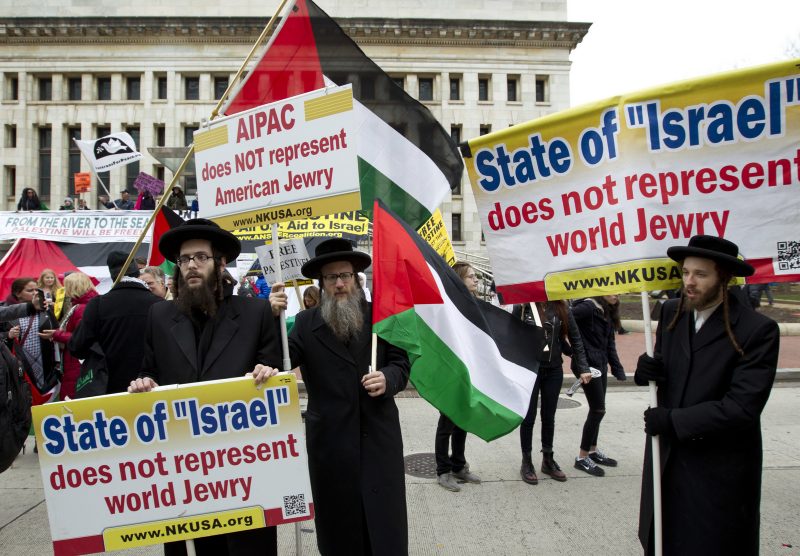 Rabbi Dovid Feldman, center, along with others protest outside of the Washington Convention Center where the 2017 AIPAC Policy Conference is taking, during a rally in Washington, Sunday, March 26, 2017. (AP Photo/Jose Luis Magana)

Growing protests, particularly from within the Jewish community, show the contradictions facing AIPAC and the dearth of options it has left to pursue.

As Israel’s politics lurch grotesquely to the right, Prime Minister Benjamin Netanyahu faces growing pressure from extremist elements within his governing coalition to increase the construction of West Bank settlements and other measures against Palestinians.

AIPAC officially supports the policies of each Israeli government, whatever they may be, but finds it increasingly hard to market Israel’s ongoing control, displacement and massacres of Palestinians to potential supporters, particularly young Jewish people. And with the Donald Trump administration far to the right of both U.S. public opinion and the international consensus on Palestine, any window of opportunity it affords Israel’s extremist government is likely to snap shut in the near future.

“I personally do not think anything has changed with Trump administration other than being more out in the open, unlike the Democrats,” Hamideh said. “More and more Americans are waking up about our U.S. foreign policy, and AIPAC is obviously a huge part of it.”

Trump’s actual policies have done Israel and its domestic supporters few favors beyond those afforded by recent administration, but his vocal, if unreliable, enthusiasm for ultra-Zionist policies has emboldened Israeli extremists and amplified the demands they’re making of Netanyahu.

A probable reversion to the status quo would leave future Israeli governments and their supporters in AIPAC holding the bag for any steps taken now.

Meanwhile, Palestinians and supporters are using the increasingly unpopular president’s vocal Zionism as a window of opportunity for themselves, turning his public embrace of pro-Israel policies against AIPAC and other politicians hoping to appeal to moderate constituencies.

And while many of these efforts are local, focusing on campuses, organizations and communities across the U.S., participants say that national mobilizations, like those against AIPAC, are playing an increasingly important part in building a sustainable movement.

“I think this rally is a step forward towards the liberation of the indigenous people of Palestine,” Ayman Nijim, a Palestinian from the Gaza Strip currently living in Boston, told MintPress.

This article first appeared on MintPressNews.com and was authored by Joe Catron.