HOW AMERICA’S POLICE BECAME AN ARMY: THE 1033 PROGRAM 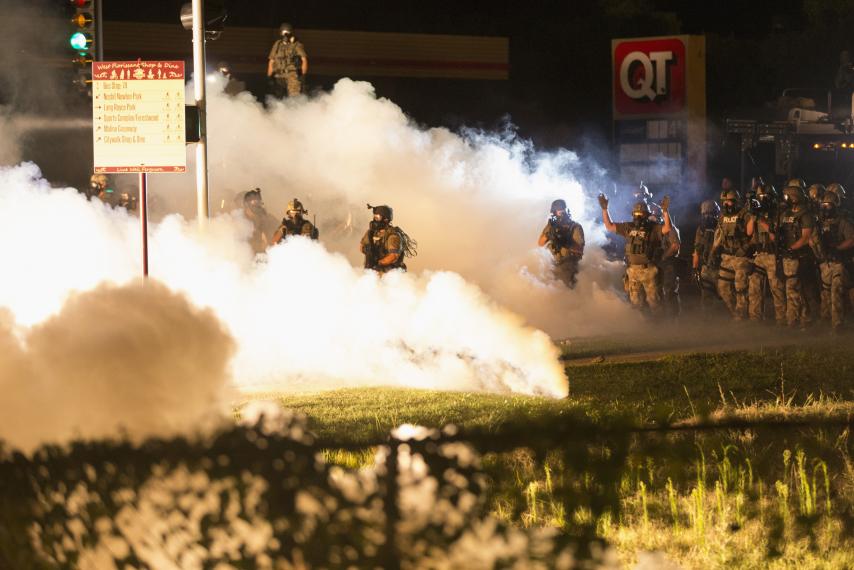 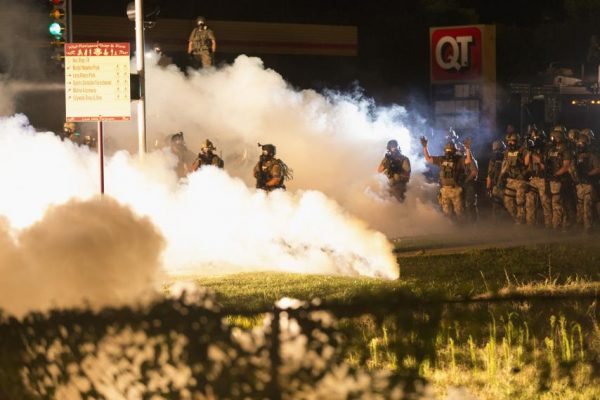 Riot police clear a street with smoke bombs while clashing with demonstrators in Ferguson, Missouri August 13, 2014.

As many have noted, Ferguson, Missouri, currently looks like a war zone. And its police—kitted out with Marine-issue camouflage and military-grade body armor, toting short-barreled assault rifles, and rolling around in armored vehicles—are indistinguishable from soldiers.

America has been quietly arming its police for battle since the early 1990s.

Faced with a bloated military and what it perceived as a worsening drug crisis, the 101st Congress in 1990 enacted the National Defense Authorization Act. Section 1208 of the NDAA allowed the Secretary of Defense to “transfer to Federal and State agencies personal property of the Department of Defense, including small arms and ammunition, that the Secretary determines is— (A) suitable for use by such agencies in counter-drug activities; and (B) excess to the needs of the Department of Defense.” It was called the 1208 Program. In 1996, Congress replaced Section 1208 with Section 1033.

The idea was that if the U.S. wanted its police to act like drug warriors, it should equip them like warriors, which it has—to the tune of around $4.3 billion in equipment, according to a report by the American Civil Liberties Union. The St. Louis County Police Department’s annual budget is around $160 million. By providing law enforcement agencies with surplus military equipment free of charge, the NDAA encourages police to employ military weapons and military tactics.

1033 procurements are not matters of public record. And the Defense Logistics Agency (DLA), which coordinates distribution of military surplus, refuses to reveal the names of agencies requesting “tactical” items, like assault rifles and MRAPs — for security reasons, a spokesperson for DLA told Newsweek via email. One can only trace “tactical” items as far the county of the requesting agency. In the case of Ferguson, that means St. Louis County.

St. Louis County law enforcement agencies have, through the 1033 Program, acquired the following “tactical” equipment, according to Mike O’Connell, Communications Director for the Missouri Department of Public Safety:

Despite the fact that police in Ferguson have been photographed with a matte black vehicle which appears to be a “Bearcat” MRAP, O’Connell told Newsweek that no St. Louis County law enforcement agencies have acquired any MRAPs through the 1033 program.

If the vehicle in the above Reuters photo is indeed an MRAP and not one of the nine “utility trucks” acquired by St. Louis County law enforcement, O’Connell said he does not know where it came from.

Given the proliferation of military weapons and military training among America’s police departments, the use of military force and military tactics is not surprising. When your only tool is a hammer, after all, every problem looks like a nail.

Our DoD program rep was curious why no weapons showed up in her search yesterday. She searched a different way this morning and it showed that twelve 5.56 millimeter rifles and six .45 caliber pistols went to St. Louis County law enforcement agencies between Aug. 2, 2010 and Feb. 13, 2013. This was erroneously omitted from the report I sent you last night. She’s double checked again this morning and is confident this was the only omission.

Sorry for the oversight.