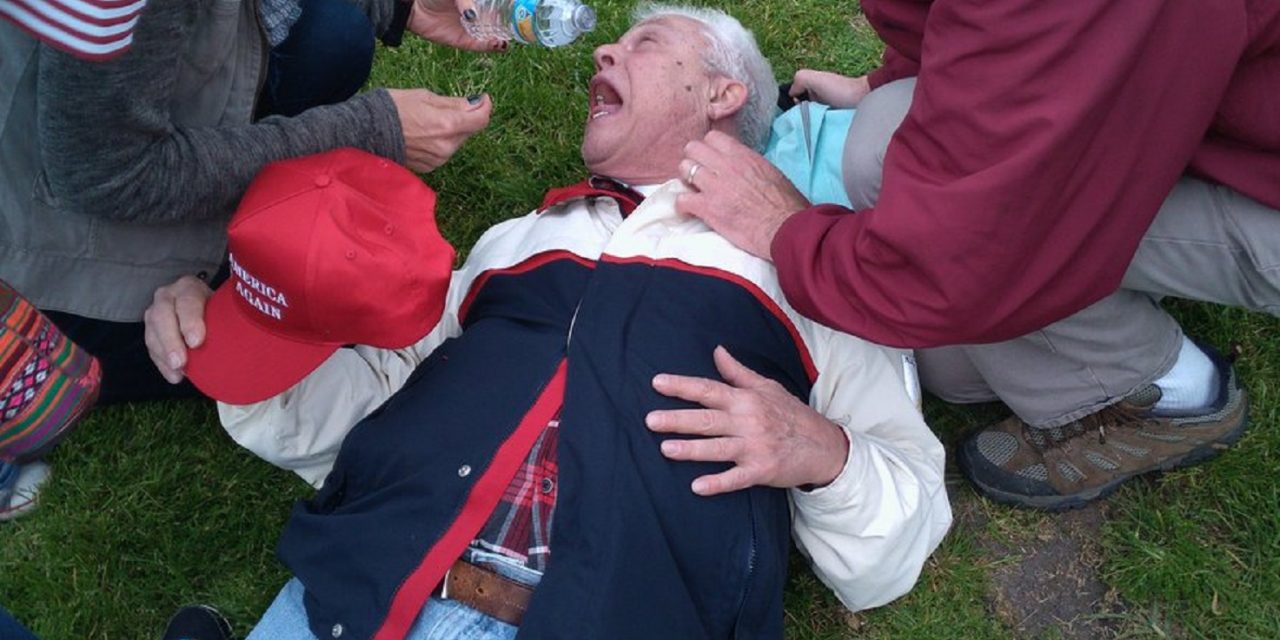 "Get out of here, you little POS," someone yelled at a ~ 12-year-old Trump supporter who is here with her dad. She flipped them the finger.

The “March 4 Trump” movement staged peaceful rallies across the nation on Saturday, most of which ran smoothly. Unfortunately, protesters descended upon the rally in Berkeley, bringing chaos and taking a stand against the freedom of speech.

The protest was reportedly organized by militant leftist group By Any Means Necessary (BAMN), who also claimed involvement in the riot in the city last month, boasting that they were one of the “organizers of Berkeley’s shutdown of white neo-fascist Milo Yiannopoulos.” In 2005, the group was identified by the FBI as “thought to be involved in terrorist activities.”

Before violence erupted, the two groups stood facing each other, shouting dueling chants of “No fascist USA” and “Build the wall.”

Shortly after the event began at 2 p.m. local time, skirmishes broke out between those marching for Trump and the radical aggressors. An elderly man was also pepper sprayed, presumably for daring to wear a “Make America Great Again” cap.

Here we go again. Not the first fight that's broken out at the #trump rally in #Berkeley. pic.twitter.com/ZPW6QbI5S1

Within an hour of the event beginning, the situation had escalated dramatically, with reports that black bloc had taken over. The Associated Press reports that people in the crowd were also throwing smoke bombs.

Fighting is spreading to the streets in Berkeley. This isn't a Trump rally anymore. It's the anarchists. pic.twitter.com/cFIu7akCSX

Normal Americans HATE the violent left as they burn another flag at #Berkeley…
pic.twitter.com/YIlbF6qszP

Police did not immediately intervene, and as protesters burned an American flag they informed a woman that they were not allowed to put out the fire, San Francisco Chronicle reporter Lizzie Johnson posted on Twitter.

"Can you put the fire out?" a woman asked. "Sorry we cannot," an officer responded. #Berkeley

These protestors clearly aren't athletes. Eggs are hitting everyone but their target, this random guy advocating for the homeless. pic.twitter.com/vUGonug6bk

Around 3:15 p.m., police began moving in and making arrests.

BPD spokesperson Office Byron White confirmed that the department is filming the protest and will be seeking to identify anarchists who were not immediately arrested at the scene.

Melee in #Berkeley: #Trump supporters and #protestors fighting in the streets of #Berkeley today. pic.twitter.com/J2dUWHTFLq

One woman reportedly went to the rally prepared — allegedly pepper spraying protesters, and pulling out a Tazer.

At least one person was taken to the hospital with a head wound and another had several teeth knocked out, it remains unclear which side the injured were on.

Johnson was reportedly warned that she would be killed if she stayed at the scene, doing her job. She also reported that the leftists were throwing eggs at police and the press.

A woman is cooking eggs on a burning #Trump baseball cap. I really, really would not encourage eating those. #Berkeley

OK, now they're throwing the eggs at police and reporters. Police still not reacting. #Berkeley

By 6 p.m., there were at least 10 arrests — including five for battery, four for assault, and one for resisting arrest. Police also confiscated bats, metal pipes, bricks, and an illegal dagger, Johnson reported.

Two more arrests in Berkeley — around 8 have now been made. "Please read me my rights," girl says. #Berkeley pic.twitter.com/S58asG4JPJ

Liberal political commentators did not only refuse to denounce the violence, they cheered it on.

Apparently there was some type of Alt-Right #March4Trump in #Berkeley and a few white supremacists got that work #HeNeedSomeMilk pic.twitter.com/Ek1cyGgpQt

Last month, black-clad rioters violently shut down a Milo Yiannopolous speaking event at the University of California at Berkeley by throwing a firebomb, violently attacking event attendees, looting a Starbucks, and vandalizing the area.

The group, wearing ski masks and all-black attire from head to toe, launched fireworks and molotov cocktails at police, caused an estimated $100,000 in damage to the MLK Student Union, and toppled a mobile light structure, setting its generator on fire. The city estimates that the rioters caused between $400,000 and $500,000 in damage to the area outside the university.

Black bloc is a common tactic used by far-left anarchists to make it difficult to identify violent protesters for prosecution, by making themselves indistinguishable from one another. While the tactic has been used in various parts of the world for decades, the first recorded use of black bloc tactics in the United States was at the Pentagon in 1988, during a protest calling for the US to stop supporting right-wing death squads in El Salvador. Since then, it has been a common movement at protests across the nation, picking up steam after the Occupy Wall Street protests swept across the country.

This situation is ongoing and we will continue to provide updates as the evening progresses.