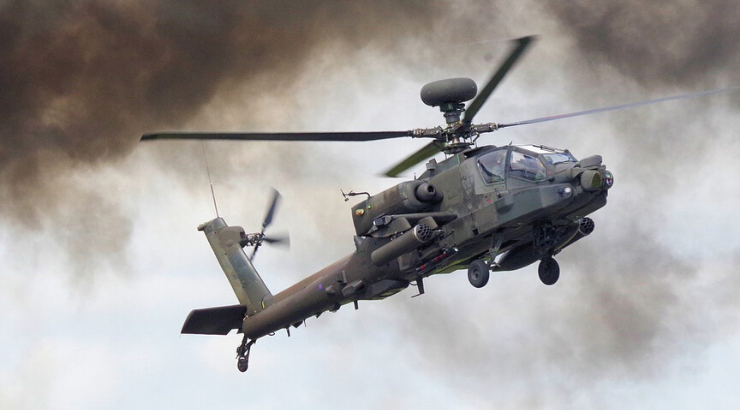 Dramatic footage over the US embassy in Baghdad as enraged protesters continue to encircle the compound with US Marines still inside, and reportedly with more Marines on the way from nearby Kuwait:

VIDEO: AH-64 Apaches protect @USEmbBaghdad. ?“We have taken appropriate force protection actions to ensure the safety of American citizens…and to ensure our right of self-defense. We are sending additional forces to support our personnel at the Embassy.”~@EsperDoD ???? pic.twitter.com/amABHBAOcL

The Pentagon announced that a pair of AH-64s Apache helicopters would be used to attempt to disrupt and disperse protests.  The US coalition in Iraq spokesman released video of low flying Apaches making aggressive maneuvers and releasing flares on the crowds below.

“We have taken appropriate force protection actions to ensure the safety of American citizens… and to ensure our right of self-defense. We are sending additional forces to support our personnel at the Embassy,” Col. Myles B. Caggins said in an official statement.

This was hours after the Pentagon announced the US will send additional troops to Baghdad specifically to protect the US Embassy in Iraq. According to the statements this is to include about 100 Marines sent from nearby Kuwait. According to one defense official cited by Bloomberg, the Marines will likely fly to the embassy area in V-22 Ospreys.

But the tactics don’t appear to be working given the mob has set the embassy compound walls on fire, including the main gate and security pass through reception area.

US Embassy in Baghdad now.
Main gate and reception on fire. Hezbollah flags raised on the wall. #Iraq #Iran pic.twitter.com/A9oOdnBnaK

Crucially, in a stunning image sure to send shockwaves through the US administration, multiple Kataib Hezbollah flags have now been erected along the walls of the US embassy.

The Apaches will likely continue encircling the area through the night as things look to get worse before they get better.

From Shock and Awe to Tweet and Flare in 17 long years https://t.co/PP7t6vO0Cu

A view from among the protests on the ground as Apaches swoop overhead:

All of this portends that the potential for even greater escalation and confrontation is in the air as Trump continues to call on Iranian proxies to leave Iraq.