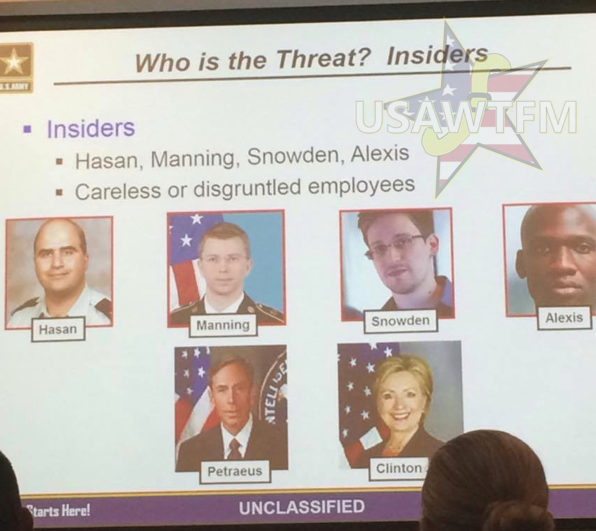 A slide used during an Army training presentation lists Hillary Clinton as an “insider threat” alongside whistleblowers and mass shooters. 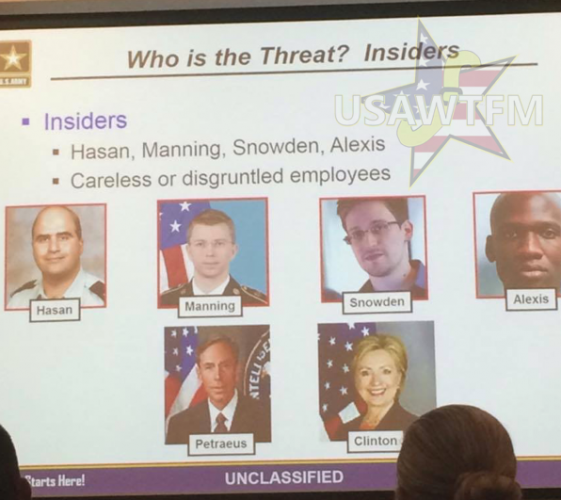 The slide is titled, “Who is the threat? Insiders,” and listed Hasan, Manning, Snowden, and Alexis together under a bullet point. The next bullet point was titled, “Careless or disgruntled employees” and featured Petraeus and Clinton.

It was posted to a Facebook page called “U.S. Army W.T.F! Moments,” on Sunday, and the Army verified its authenticity to the Washington Examiner. They noted that the slide was developed 18 months ago and was used to teach best practices for maintaining operational security, but stated that it is no longer in use.

“As is common with Army training requirements, the local unit was given latitude to develop their own training products to accomplish the overall training objective. This particular presentation had not been reviewed or approved by the unit’s leadership, and does not reflect the position of the Army,” Maj. Thomas Campbell, a U.S. Army Training and Doctrine Command spokesman told the Examiner.

Clinton’s judgement and character has long been in question since it was revealed that she was using an unsecure private server for classified communications during her tenure at the State Department — putting national security at risk and avoiding open records laws.

On Monday, it was revealed that the FBI has found an additional 14,900 email messages that Clinton never turned over to the government. She had previously claimed that she had turned over all of her work related electronic communications.

As the scandals continue to add up, whether this slide was a joke or not, it doesn’t appear that everyone in the Army is prepared to trust or respect Clinton if she becomes their new Commander in Chief, rightfully.