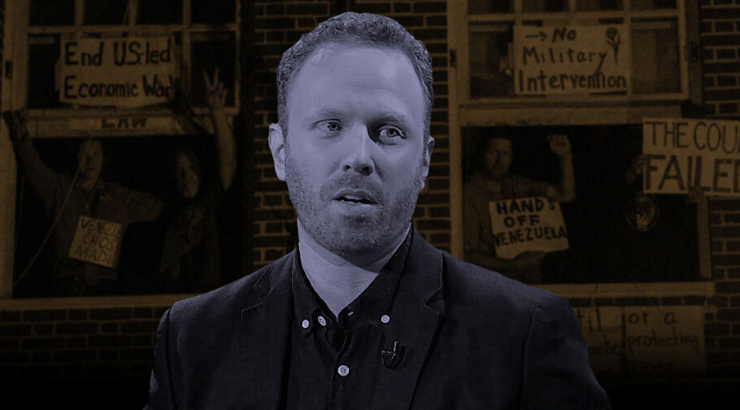 Max Blumenthal, the editor of independent media outlet The Grayzone, was secretly arrested on October 25 in a “SWAT-style” morning raid on his Washington D.C. home. He was held in D.C. Central Detention Facility for two days incommunicado, without the ability to communicate to the outside world, having been refused a phone call. He claims to have been shackled by his hands and ankles for some time and kept in a series of cages and cells. Blumenthal was arrested on a five-month-old assault charge stemming from an incident that took place during the D.C. Venezuelan Embassy siege.

A Venezuelan opposition supporter, Naylet Pacheco, claims that Blumenthal kicked her in the stomach several times during a conflict between the embassy protectors and supporters of opposition leader Juan Guaído, who proclaimed himself President of Venezuela in January. At the time of the incident, The Grayzone was publishing a series of investigative reports and news updates that contradicted the Trump administration’s narrative, noting how much of the supposedly grassroots uprising, was, in fact, funded by Washington and exposing the corruption and violent tactics of opposition members. The warrant for the charge had initially been rejected. It was, however, revived later without Blumenthal’s knowledge.

“If the government had at least told me I had a warrant I could have voluntarily surrendered and appeared at my own arrangement. I have nothing to fear because I’m completely innocent of this bogus charge,” he said. “Instead, the federal government essentially enlisted the DC police to SWAT me, ensuring that I would be subjected to an early morning raid and then languish in prison for days without even the ability to call an attorney.”

A War on Dissent

When asked for comment, political comedian and TV show host Lee Camp told MintPress News that this was the latest example of the government trying to silence dissenting opinion and controlling the media:

“This is the continued descent into a fascist state. When the US government is arresting journalists in dramatic fashion clearly because their reporting is threatening to the power elite, then what else can one call it?”

Corporate media largely applauded U.S.-backed regime change efforts in Venezuela, refusing to even call them a “coup” and instead preferring to frame them as a people’s “uprising,” taking the same line as the Trump administration that they claim to “resist.” Many of those same media outlets have also begun to partner with the government in a stated effort to fight fake news. The primary consequence of which has been to undermine and reduce the reach of alternative media, a vital counterweight to the corporate message. In response to a call to arms in the Washington Post, algorithm changes to Facebook, Google, YouTube, Bing, and others have led to independent news sites being de-ranked, disincentivized, and sometimes, deleted.

Despite his ordeal, Blumenthal has still been treated better than others who ran afoul of the U.S. government. Chelsea Manning is still held in prison, Edward Snowden is in exile, while Julian Assange, whose condition in solitary confinement is deteriorating, faces a highly uncertain future. On Assange, mainstream media largely applauded his April arrest, describing it as a “long overdue” (Washington Post) and “satisfying” (Saturday Night Live) detention of an “anti-American” (National Review) “narcissistic” (Washington Post) “Internet Troll” with an “outsized view of his own importance” (the Times) leaving his “voluntary confinement” (the Daily Beast) to finally “face justice” (Daily Mail) for his “indisputable crime” (New York Times).

The Trump administration refused to recognize the results of the January 2019 elections that awarded Nicolás Maduro another term in office. Instead, it announced its support for self-appointed President Juan Guaído as the rightful head of Venezuela. This, despite the fact that Guaído has never stood for the office and that over 80 percent of the country didn’t even know who he was. Following Guaído’s self-declaration of his presidency, the Trump administration demanded that all Venezuelan diplomats leave the United States, so those in Venezuela’s Washington D.C. embassy formally invited peace activists to enter and protect the integrity of the building.

Just as Guaído attempted to take the presidential palace in a coup attempt in April, supporters of the far-right anti-President tried to storm the Venezuelan embassy in D.C., an event closely covered by The Grayzone, and by MintPress News’ Alex Rubenstein, who was amongst those invited to protect the building. Rubenstein detailed how the attackers attempted siege and intimidation tactics to the embassy protectors out and enjoyed the tacit support of the local security services, who refused to protect the embassy’s territorial integrity, a serious diplomatic violation.

The dramatic story of a SWAT team bursting into a dissident journalist’s home, bundling him into a car and holding him incommunicado for days appears not to have interested either corporate media or professional press freedom groups like Reporters Without Borders or the Committee to Protect Journalists. When pushed for comment, the US Press Freedom Tracker excluded this case on a technicality, stating:

We are aware of Blumenthal's arrest and based on the information available it does not meet the threshold for categorization on our site because he was not in the course of reporting when it happened.

There has been exactly zero mainstream coverage or commentary of the government’s arrest of a prominent critic, meaning that for those relying on corporate media to inform and shape their worldview, the event did not happen. This is all the more remarkable considering Max Blumenthal is an award-winning, New York Times bestselling author, comes from a well-connected family of elite former White House insiders (his father was a senior aide to President Clinton), and boasts a huge following on social media.

The silence from the mainstream press contrasts the considerable attention that the event has received in alternative media and the outpouring of support from independent journalists. His colleagues at The Grayzone immediately came to his defense; Aaron Maté stated:

.@MaxBlumenthal was just arrested on a ridiculous charge stemming from delivering food to besieged activists in Venezuela's DC embassy *FIVE* months ago. Max has done incredible work exposing US-backed coup in Venezuela & this is a bid to intimidate him. https://t.co/1YdK3SyiTl

Meanwhile, Anya Parmpil (another embassy protector) noted that she was assaulted in broad daylight by Guaído supporters and in front of the secret services, who did nothing to protect her.

Meanwhile right-wing Venezuelans grabbed my body, pulled my hair, & threw water on me when I tried to question their leader @carlosvecchio

Cops looked on as putschists attacked me in broad daylight. No one involved was ever charged w assault ?https://t.co/wuMkJ8tvML

Many saw the action as part of a wider government campaign aimed at silencing dissenting opinions. “The establishment has declared war on anti-imperialist journalists,” declared Kerry-Anne Mendoza, Editor-in-Chief of The Canary, “There should be global outrage.” Middle East specialist Jonathan Cook agreed, claiming it was “the latest example of the growing crackdown on independent journalism.” Electronic Intifada’s Ali Abunimah offered his support to Blumenthal, decrying the U.S. government’s “clear retaliation and intimidation” tactics.

The shocking raid and arrest of @MaxBlumenthal on a false charge is clear retaliation and intimidation for the essential and truthful reporting he and @GrayzoneProject are doing. Full solidarity. https://t.co/eaj58a8BMU

Others criticized the mainstream press’ reaction to the arrest of a prominent critic of the U.S. government. Mark Ames, the founder of the Moscow-based outlet the eXile, noted that Max Blumenthal’s treatment reminded him of “the worst of Russia”, except for the fact when opposition journalists like Ivan Golunov were arrested, even the Putin-friendly press decried it. Meanwhile, journalist and filmmaker Abby Martin offered a thought experiment, tweeting:

Max was arrested on a total fabrication concocted by the Venezuelan opposition to punish him for exposing them. Cops continue to do the bidding of rightwing provocateurs––If this happened in Venezuela to a critical journalist, they would be crying about Maduro's authoritarianism. https://t.co/cWFqNW4UA4

In fact, a similar event did happen in Venezuela; earlier this year freelance American journalist Cody Weddle was detained and deported by Venezuelan authorities. The incident made worldwide headlines, for example, in the New York Times, Washington Post, USA Today, Reuters and the Guardian, and drew immediate condemnation from Reporters Without Borders, Human Rights Watch and the Committee to Protect Journalists, highlighting the selective outrage of the corporate press and the human rights industry.

A History of Violence

Blumenthal is uncompromising in his position regarding the accusation: “This charge is a 100 percent false, fabricated, bogus, untrue, and malicious lie,” he declared. “It is clearly part of a campaign of political persecution designed to silence me and The Grayzone for our factual journalism exposing the deceptions, corruption and violence of the far-right Venezuelan opposition.”

Far from the wholesome image they enjoy in much of the press, the Venezuelan opposition has a long and exceptionally violent history of attacking political opponents, including journalists. Their many campaigns to oust President Maduro from power have included beheading innocent passers-by and roasting Afro-Venezuelans alive in the street in an attempt to terrorize the population into surrender.

After reporting on this violence in 2017, journalists Abby Martin and Mike Prysner were the subject of a viral fake news campaign that claimed they were informants gathering information on the opposition for the secret police. They received dozens of death threats as part of a campaign in Venezuela to find and lynch them. The two escaped unharmed but others were not so lucky. TeleSur’s Adriana Sivori was shot in the back by the same opposition movement while wearing a bulletproof vest and helmet marked “press.” Meanwhile, journalists for the Globovisión network were covered with gasoline by far-right protestors who attempted to set them on fire. This “warm welcome” is extended to those in the press who the U.S.-backed opposition feel will not present them as positively as corporate media does.

These incidents were not mentioned, let alone condemned, by human rights or press freedom groups, indicating, as does the Blumenthal arrest, that some consider the right to free speech as dependent on who is doing the talking and what they are saying.

Filmmaker Dan Cohen described Blumenthal’s treatment as a “blatant attempt to stifle and suppress” The Grayzone’s reporting on the U.S.’ attempts to overthrow the Venezuelan government, adding, “Everyone who cares about press freedom in the US should speak out against this.”

Judging by their silence, very few in the mainstream media do.