Article: Henry Kissinger Advises Trump To Act Like A Madman 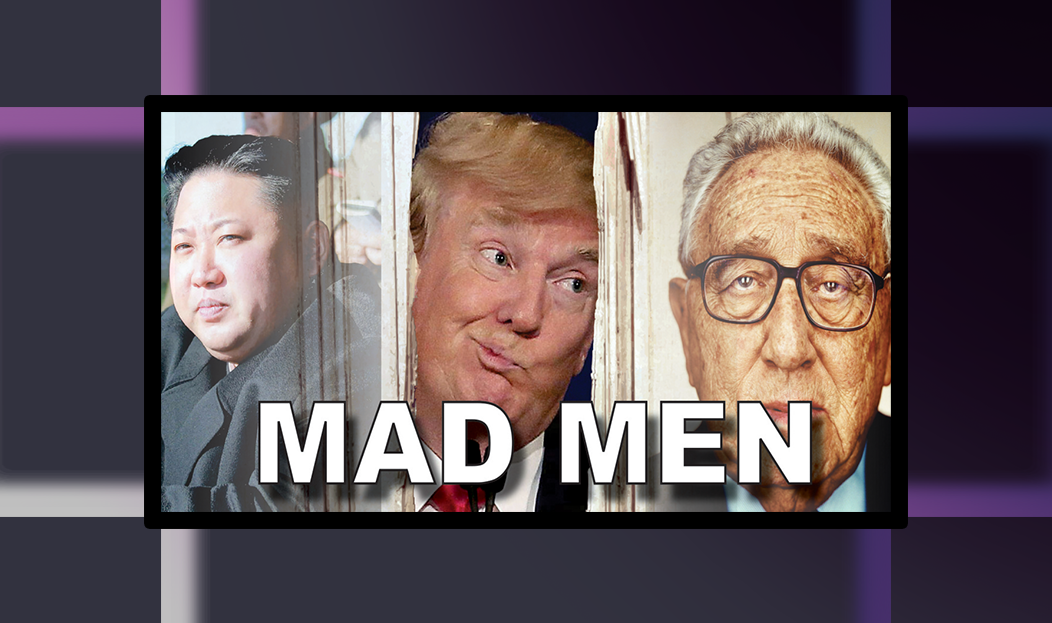 Welcome back beautiful and amazing human beings. You are today’s date because you’re 10 out of 10. Sorry, I couldn’t help myself, apologies in advance. Okay let’s just get into the reality crushing, cold hard facts about the world today. The world that the few and powerful don’t want you to understand.

In this semi-regular WeAreChange news broadcast we will discuss how the chief globalist, mass murderer in the White House, has been telling Donald Trump what he should be doing. A follow-up on the media mogul, sexual abusing monster and the authorities changing the official narrative of what happened during the Las Vegas shooting. I wonder why it’s hard to trust authorities who keep changing their story so many times and of course a very important update about the USA liberty act in Congress.

Let’s start off with the most important story of the day, and that’s the globalist kingpin himself, Henry Kissinger. Who just met with Donald Trump saying a new constructive and peaceful world order is possible. Henry Kissinger is a mass murderer that is advising Trump on North Korea and China. There are two reasons we should worry about Kissinger. First he is 93 years old, and he’s continuing to play the most important role when it comes to American foreign policy, and second, he’s an outright criminal who is wanted for mass murder in several different countries all around the world. 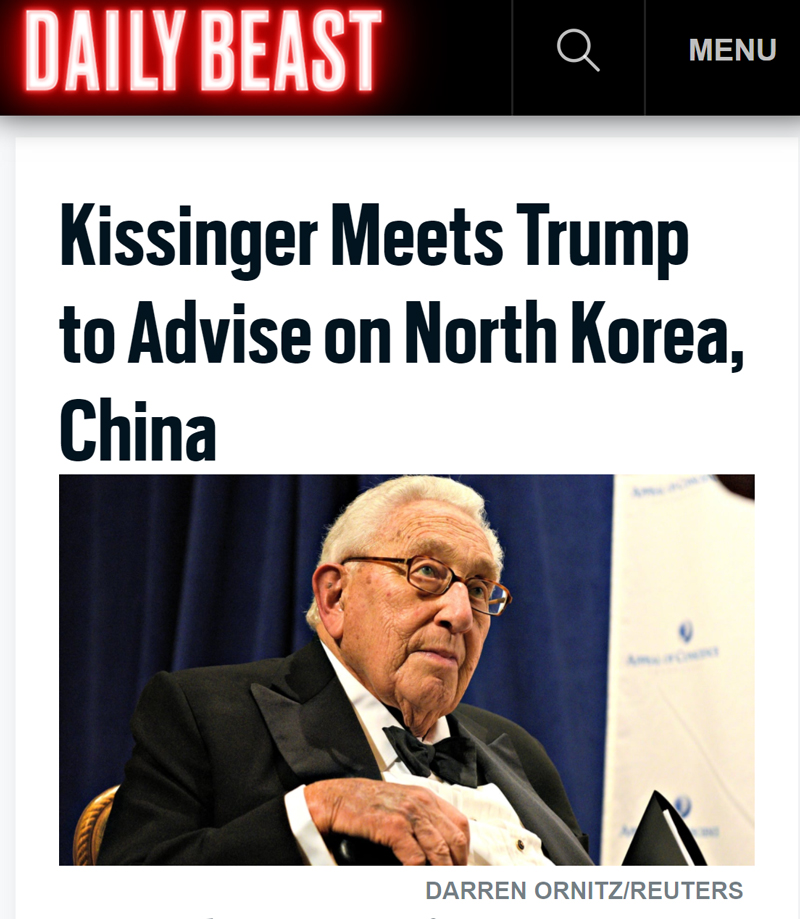 Kissinger is a megalomaniac who has proven through his actions in the US government that he is indifferent to the deaths of untold numbers of civilians. Civilians that were casualties to his actions over the last fifty years. Kissinger purposefully hindered the US effort to end the mass killings in Argentina, and millions of people died in Vietnam after Kissinger prolonged that war. He betrayed the peace treaty in exchange for a political power play. I could keep going on and on about his crimes throughout history that would take several hours to make into one single video. Probably not even mentioning the crimes he committed in Vietnam, Cambodia, and how his fingerprints surround the birth of American militarism. 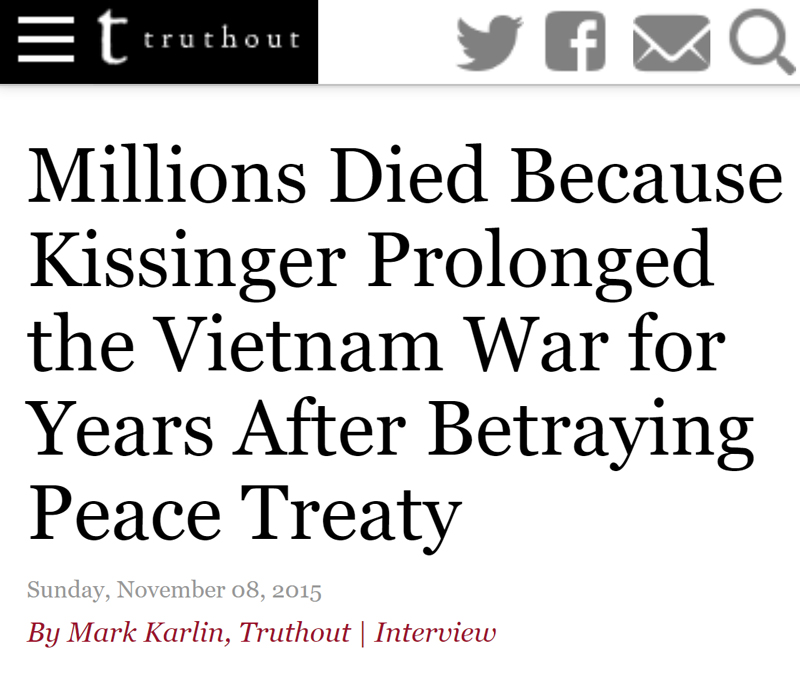 Since Donald Trump is asking Henry Kissinger what to do with North Korea, should we be hopeful about a new constructive, peaceful world order? If you look at the crucial foreign policy decisions, Donald Trump has made they come directly out of Henry Kissinger. Kissinger is insisting on the importance of unpredictability even irrationality in diplomacy. This is called the madman theory; it didn’t work for US President Richard Nixon when Henry Kissinger was advising him. It’s a theory that you’re supposed to scare your opponent into concession by cultivating an image of recklessness. 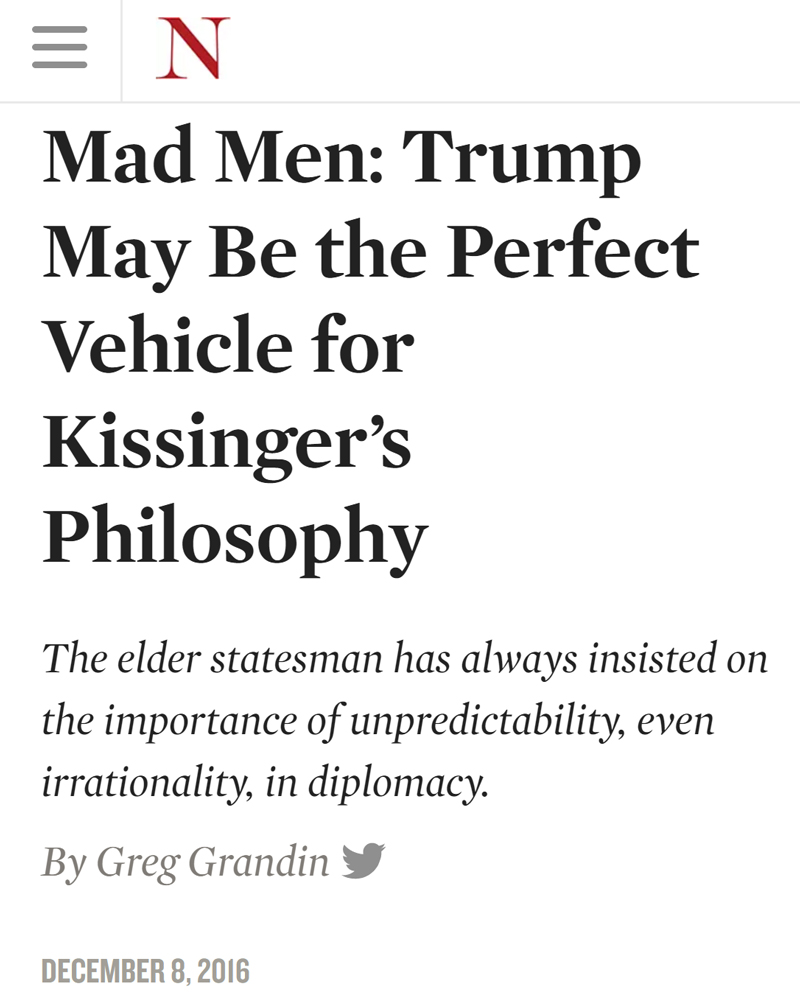 I don’t know about you, but when you have the most massive military in the world when you spend seventy percent of the world’s military spending on just one country alone, I don’t think you have room to become reckless.

Henry Kissinger is the same person who advised Richard Nixon to use the threat of nuclear warfare for diplomacy openly. Do what I say, or I’m going to kill you is not diplomacy at all. This is very undiplomatic especially with an unstable and unpredictable North Korea and also an emboldened China that doesn’t want a war. 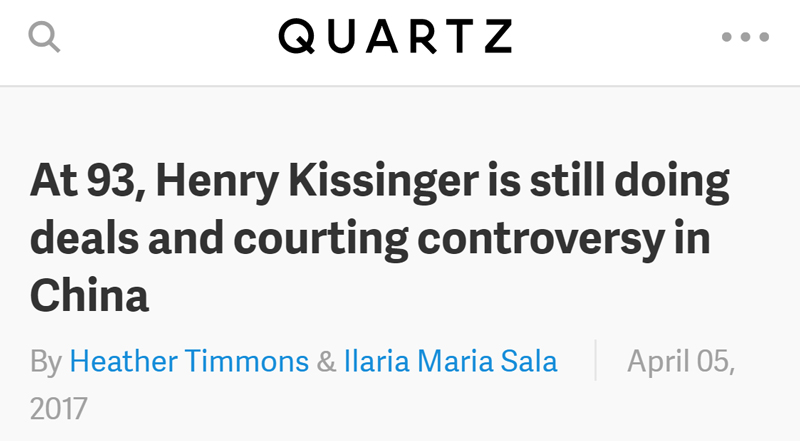 I remember discussing with this audience before Donald Trump was elected, I pointed out that the relationship between Trump and Kissinger is exceptionally troublesome and that it won’t make America first. I received a lot of negative responses about it at the time, am I wrong? Do you guys not see a problem with this? Please let me know. In unrelated news about mad men protected oligarchs we have shocking revelations about the media mogul Harvey Weinstein. 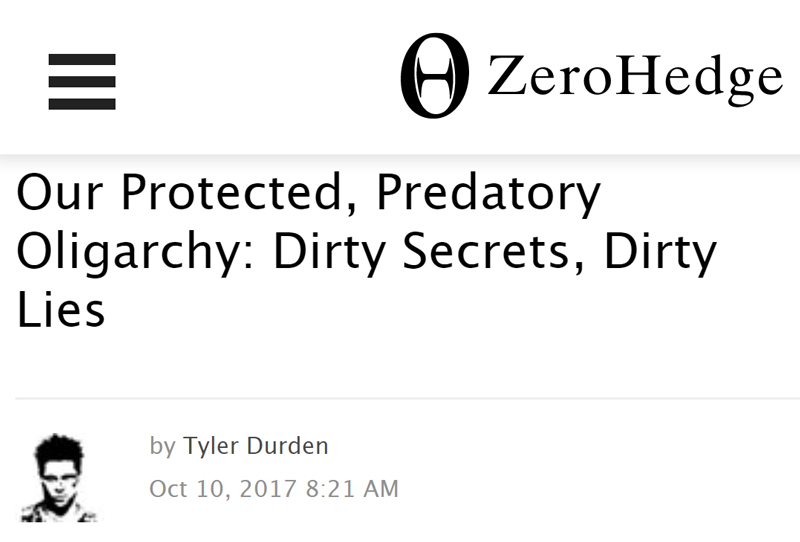 He has been caught being a sexual predator for the last three decades. Two additional victims of Weinstein are coming out and accusing him of rape even Angelina Jolie Gweneth Paltrow said that Weinstein sexually harassed them. This major media mogul, of course, denies all the accusations. If there wasn’t enough accusations and proof, we’re also finding out that in 2015 the New York City Police Department ran a sting operation where Weinstein sexually harassed another victim. He then admits that he groped women. I won’t be playing the full audio here because it is disturbing. The information we’re getting from journalists and other pundits is that his victims are insisting that this was not a secret. Everyone knew about Weinstein being a sexual predator.

I think one of the most significant of shocking takeaways from this entire story is the cover-up. Why didn’t the NYPD arrest him in 2015 and why did the New York Times sit on the account for over 13 years? Why was he allowed to do this for over 30 years and yet the entire media and news business remained silent? If they covered this up for 30 years can you imagine what else they are probably hiding from you?

CNN the most despised and discredited fake news organization in the United States just wrote an article pointing out how long-term friends of Weinstein, Hillary Clinton, and Barack Obama, have been silent during this entire situation. If CNN has to remind you to do the right thing you know you messed up.

In other sexual abuse stories, we just found out that one of the largest pedophile sites in the world has been securely run by a police department and governments in an international operation called Operation Artemis. 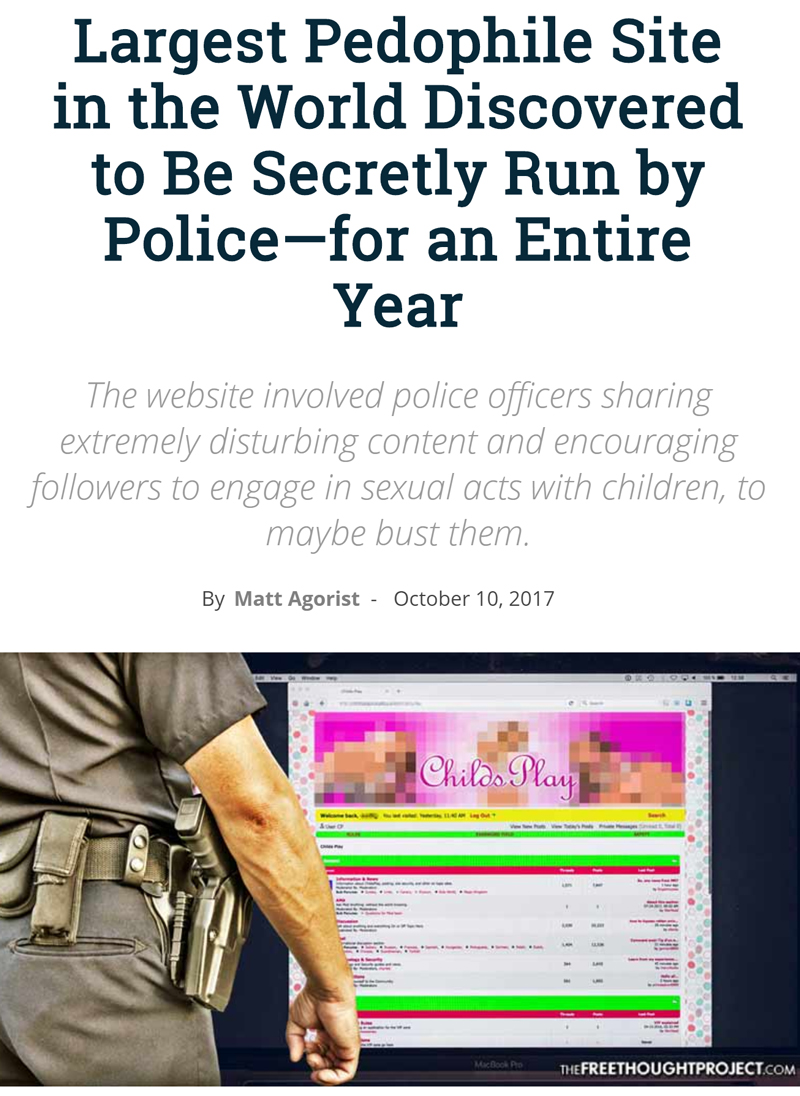 This controversial issue has sparked a lot of debate. Many of the police departments and people are saying that this was a good thing. The police report they needed to set up a child pornography site to catch child predators. Others are saying that police shouldn’t break the law to catch criminals who are breaking the law. Victims of child pornography and their families are coming out saying that they shouldn’t be used as bait. The police shouldn’t use their images when they were already victims of horrendous crimes.

People are asking the question did the government and police create more sexual predators? They were running the most extensive online pedophilia website. It would be fascinating to hear your point of view on this issue. Where do you stand on this debate? Are the police right or were they wrong? It’s hard to trust any authority figure since a lot of times they don’t always tell the truth.

This leads us into the next story of how the FBI and the Las Vegas police department have changed the official narrative on Las Vegas. In a dramatic shift, the police have laid out a new timeline of what happened in Las Vegas. They say that the security guard who encountered the shooter was shot at 9:59 PM, several minutes before the mass shooting began. Initially, the police department said that this security guard was shot after the mass shooting took place. They claimed that the shooter fired 200 rounds into the hallway. Now they say that the 200 shots were fired six minutes before the mass shooting at the concert. Even with this information it still took the police over an hour to respond to the shooter’s room. The reason they had given for not being in a rush to enter the room was that the security guard had halted the shooting. However, this didn’t happen.

The police initially said the shooter arrived at the hotel on the 28th of September. They have now changed the story to say that he checked into the hotel on the 25th of September three days earlier than initially claimed. This was discovered because of a receipt that was posted by a waiter. It showed that he was served room service on a date where the police said that the shooter was not in the hotel.

There are still many inconsistencies and no surveillance footage released. The authorities have been caught changing the story when they were seemingly giving out false information. It makes you wonder why aren’t they telling the truth. If they can’t tell the truth about basic facts, have they done their jobs? Are they covering something up?

These are fundamental questions that need to be asked and answered. These latest actions the authorities are the ones who are fueling the fires for all the conspiracy theories. They’re proving some of them right with these most recent efforts. There are many witnesses and testimony as well as forensic accounts of a second shooter on the scene.

Mike Adams made a complete video about this subject which you can watch here.

It’s important to be skeptical of any authority figures, especially during these major events. Events that will have broader implications on our lives.

In other news, there’s a very important bill in the US House of Representatives right now called the USA Liberty act. Can you guess what the USA Liberty Act does? Well, it evaporates and destroys your liberty as it renews the currently active NSA mass surveillance program. The program that allows the US government to spy on you without a warrant. It does have a really good name, but it does the opposite of what it represents. 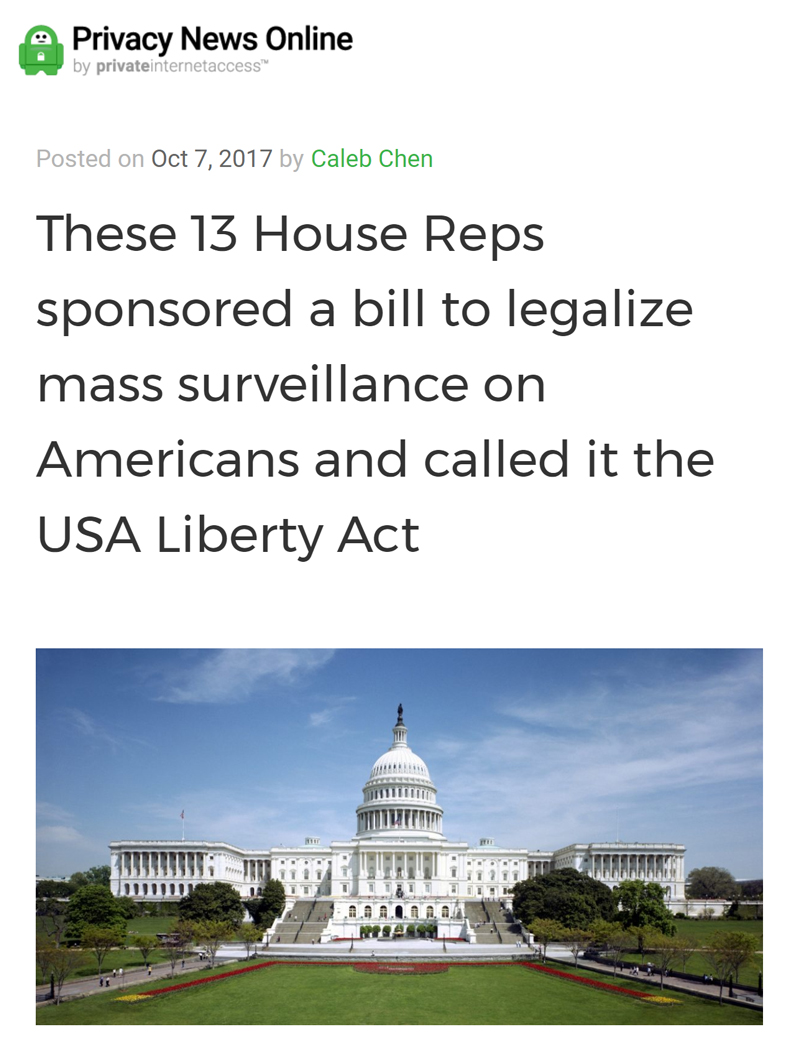 This is very similar to the new cohesive, peaceful world order which in reality is all about U.S. militarism and foreign wars of aggression. Kind of like how police officers are supposed to stop crime and not commit them. Similiar to authority figures whom you are supposed to be able to rely on to provide verified information but instead are caught lying. The world is completely upside-down and backward.

If you even dare to talk about these things YouTube will make sure to send you down the memory hole, screw you over, and take away your income. They will censor you into oblivion so they can substitute mainstream media propaganda. Just try and talk about Las Vegas. They want to control the narrative; they want to keep you dumb and scared as they watch every single one of your moves.

The only solution from all of this by withdrawing our compliance. An informed public of people power could end this at any moment if we are armed with the correct information.

If you believe in this message, please share this video and help get the word out. Try to be the change that you want to see in this world.

I want to thank all of you guys for spending your energy and time with me on this journey. This would not be possible without your help. Please visit https://wearechange.org/donate and help keep us an entirely independent news organization. This operation runs solely on your donations. I love you guys. Thank you again.