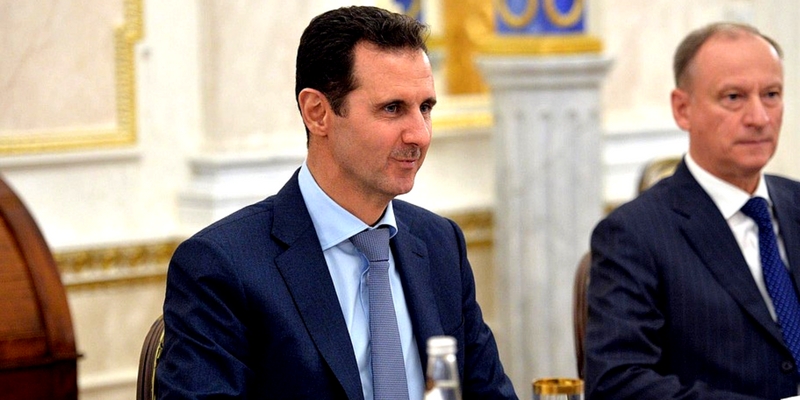 In a wide-ranging new interview with Russia’s Rossiya-24 television on Thursday, Syrian President Bashar al-Assad addressed the death of White Helmets founder James Le Mesurier, who had been found dead Nov. 11 after an apparent fall from a three story high balcony outside his Istanbul office.

Le Mesurier was a former British military intelligence officer and founder of the controversial White Helmets group which Assad has previously dubbed the ‘rescue force for al-Qaeda’ and his reported suicide under mysterious circumstances is still subject of an ongoing Turkish investigation. In an unusual and rare conversation for a head of state, Assad compared Le Mesurier’s death to the murky circumstances surrounding the deaths of Jeffry Epstein, Osama bin Laden and ISIS leader Abu Bakr al-Baghdadi.

Assad said what connects these men are that they “knew major secrets” and were thus “liquidated” by “intelligence services” — most likely the CIA, in the now viral interview picked up by Newsweek and other mainstream outlets.

“American billionaire Jeffrey Epstein was killed several weeks ago, they said he had committed suicide in jail,” Assad said during the Russian broadcaster interview.

“However, he was killed because he knew a lot of vital secrets connected with very important people in the British and American regimes, and possibly in other countries as well.”

“And now the main founder of the White Helmets has been killed, he was an officer and he had worked his whole life with NATO in Afghanistan, Kosovo, Iraq and Lebanon,” he explained.

“Both of us know that they [representatives of the White Helmets] are naturally part of Al Qaeda. I believe that these people, as well as the previously liquidated bin Laden and al-Baghdadi had been killed chiefly because they knew major secrets. They turned into a burden once they had played out their roles. A dire need to do away with them surfaced after they had fulfilled their roles,” Assad continued.

Concerning White Helmet’s founder Le Mesurier’s death, he pointed to the CIA or an allied intelligence service, such as Turkey’s MIT:

“It is quite possible that Turkish intelligence agencies did the job upon the instructions of foreign intelligence services,” he qualified.

It’s always a thrill when your research into 2 separate issues intersect. pic.twitter.com/i4b26WiKyJ

The Syrian president then speculated that, “Possibly, the founder of the White Helmets had been working on his memoirs and on the biography of his life, and this was unacceptable. This is an assumption, but a very serious one, since other options don’t sound convincing to me at the moment.”

Though Assad has done major media interviews routinely over the past years related to the now eight-year long war out of which which he’s come out on top, this latest has already received the most visibility, and is currently going viral — likely given the immense public suspicion and doubts surrounding Epstein’s jail cell death.

Even Newsweek weighed in, commenting: “Syrian President Bashar al-Assad waded into the conspiracy theories around Jeffery Epstein’s suicide, saying the financier and convicted sex offender was murdered as part of a Western plot to eliminate high-profile people who knew too much.”